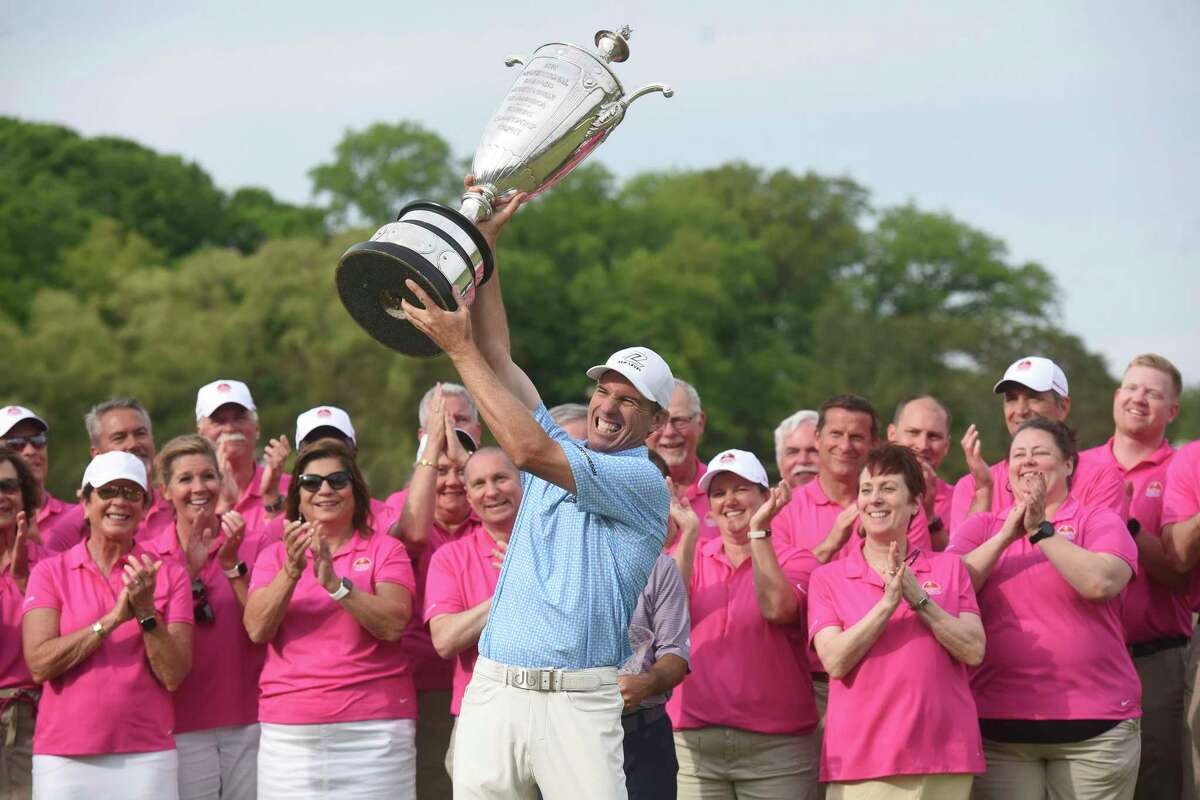 There’s no doubt who the Superman Of The Seniors is — Steve Alker proved it once again with a dazzling 63 on Sunday that earned him his first-ever major championship — the Senior PGA.

Alker, who literally came from nowhere, played his way onto the over-50 circuit — he had no status — but now he’s the King Of The Mountain after racking up his fourth victory in his last 11 starts.

The New Zealander played a virtually perfect round and four back-nine birdies sent him blowing past overnight leader Stephen Ames.

Alker’s 63 got him to an impressive 16-under par — three better than Ames (67) and six clear of third-place Bernhard Langer, who gave it a run but came up well short of winning his 44th senior event.

Alker started the day four back of Ames but nine birdies did the trick at Benton Shores.

“It’s been a great ride out here and I’m enjoying myself,” said Alker, who earned $630,000 with his third victory of the year, pushing his season earnings to just over $1.8 million. “The first couple of weeks were OK. I wouldn’t say I’m comfortable yet, but just comfortable playing with the guys out here.”

The venue at Shadow Creek was fancy but the field wasn’t much at the LPGA Match Play this past week.

The field was devoid of most big names as players were resting and prepping for this week’s U.S. Open at Pine Needles.

Eun-Hee Ji did emerge as the winner Sunday as temperatures cooled a bit in Las Vegas.  Ji defeated Ayaka Furue 3-and-2 and earned the last spot in this week’s U.S. Open.

Ji did make some history with her win.  At age 36, she became the oldest South Korean winner on the LPGA Tour.

Things were looking good for New Zealander Ryan Fox Sunday at the Dutch Open — until they didn’t.

Fox stood on the 72nd tee with a three-shot lead over Victory Perez of France, who was back on the 17th hole, sitting at 12-under par, three behind Fox.

It was then that Fox found the water hazard right off the tee on the par five 18th, hit his third into an difficult spot behind some greenside bunkers then flubbed his fourth, eventually making a double-bogey to finish his round at 13-under, closing with 68.

Perez then proceeded to birdie the 17th then put himself in position to walk away with the title as he stood over a nine-foot birdie putt at 18.  He missed and opened the playoff door for Fox.

The two made three trips down the 18th, each making a pair of birdies and a par but it ended quickly when they went over to the 17th, where Perez made his birdie to tie Fox.

Perez holed a spectacular 40-footer for the victory.

“There was a fair amount of fortune, I’ve got to be honest with myself, holing out those long putts in the play-off,” Perez said.  Indeed, one of those long putts was a 20-footer on the third playoff hole to stay alive.

“I just tried to focus on me all day, that’s all I can do, is try to keep a champion mindset and hit good shot after good shot.  The chips were going to fall where they were going to fall, it’s almost impossible to predict what is going to happen in golf: guys come out of nowhere and win tournaments and guys take huge leads. You just have to focus on you and not look at the board and I was just fortunate to fall on the right side today.”

Once again the LIV Series showed its ongoing problems.  The field for the first event outside London at the Centurion Club was supposed to be announced last Friday but no announcement came forth.

In the meantime, at least one player has admitted to being in the proposed field — Richard Bland.

“I don’t know, is my honest opinion. I guess we’ll find out in a couple of weeks,” Bland said Sunday after finishing the Schwab Shootout when asked about fallout from the DP World Tour.

“I’ve spoken to (DP World Tour CEO Keith Pelley) about it and we’ve both kind of put our positions on the table and that’s fair. Your guess is as good as mine right now. I honestly don’t know. I don’t think anybody does right now.”

The PGA Tour has denied releases to its members.