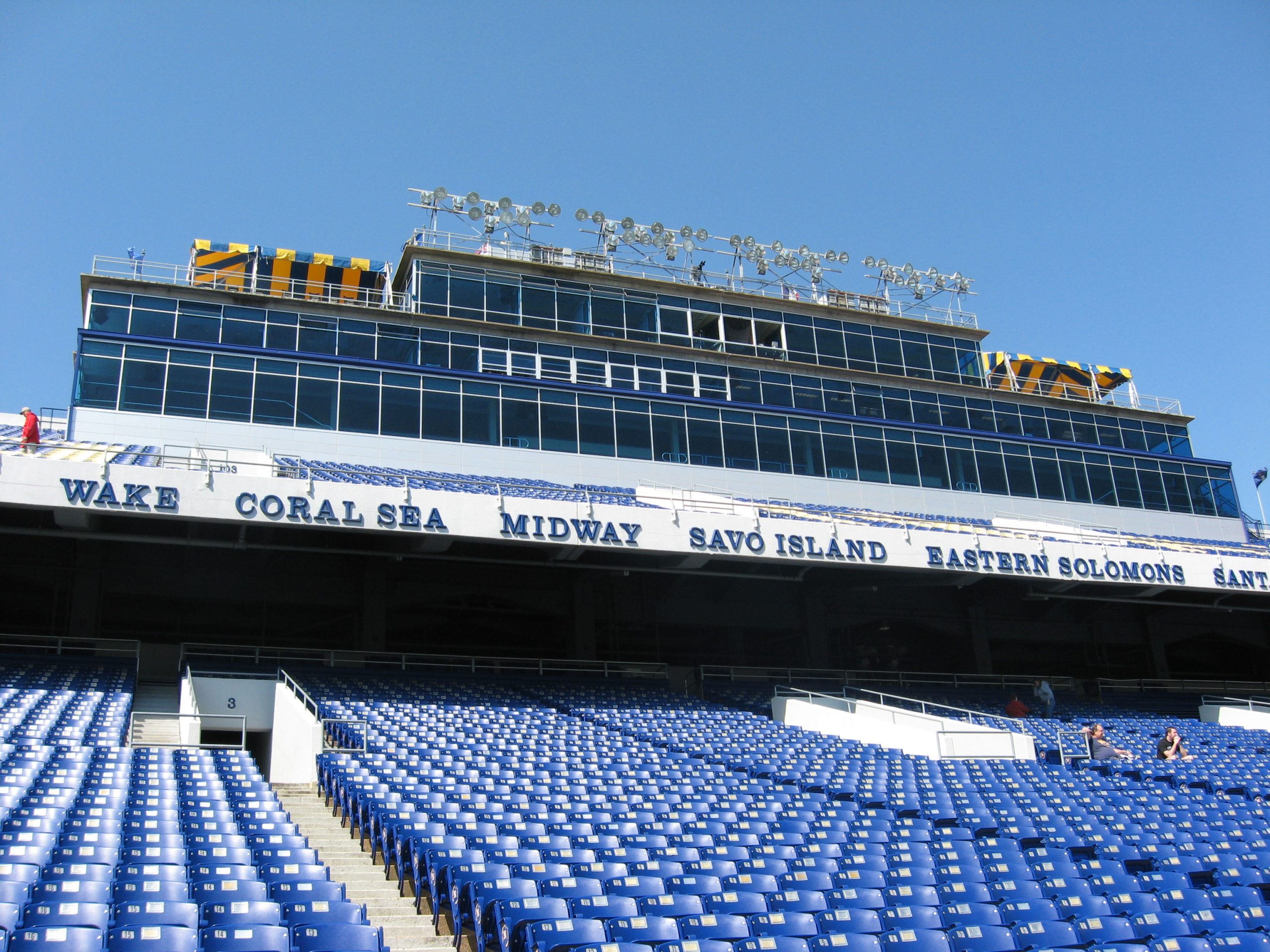 The names of these battles were etched into my memory banks as a young child at Navy football games.

Posted By: Tom Edringtonon: May 30, 2022In: FeaturesNo Comments

Navy-Marine Corps Memorial Stadium was my happy place as a child.

Navy football games with my father remain my favorite moments of all.  It was there that I first noticed and paid great attention to the names inscribed on the circular wall that supports the upper deck of the stadium:

Those are just a few of the 45 names on the wall — the stadium is a modern memorial to those many battles over the decades where our Navy and Marines fought, where many died.

The Vietnam battles were not there in the 50s and 60s when my father and I watched Navy football.  But the names were a careful study.  I knew my father’s ship was in the thick of it at Guadalcanal and that’s where he and the rest of the crew of the U.S.S. Fuller took heavy fire from the Japanese.  My father, who would go on to serve 38 years in the U.S. Navy, told me that’s the battle where they feared they wouldn’t make it home.  The Fuller’s bow was blown off but they survived and made it to New Zealand for repairs.

Both my father and mother came home from World War II.  So many did not.  And it is on this day, this Memorial Day that we honor and remember the millions who have given Their Last Full Measure Of Devotion to our country and its flag.

Many years later, the hard, cold facts of the Vietnam War came to light.  As a high school student, there were many evenings when my father came home from work, sullen and somber.  I didn’t know why until many years later.  He had gone from Hospital Corpsman to officer and rose through the ranks to Captain, highest rank then in the Medical Service Corps and his final tour of duty was the Bureau of Medicine and Surgery in Washington. As Chief of Personnel for the Hospital Corps, the corpsmen serving with the Marines in Vietnam were his men.  Many of them didn’t make it back alive and he personally wrote the letters to the families.  It is the toughest duty in the chain of command.

I later understood that many of those evenings when he didn’t say much, he had written multiple letters to the families of his men who died in battle.

That war became a harsh reality in college.  It was our sophomore year at East Carolina when we received the bitter news that our friend and fraternity brother — Rich Del Arena from Philadelphia, was killed in action.  Rich was three years ahead of us but he was a larger than life figure his senior year at ECU.  We all looked up to him, he loved life and it showed.  It broke our hearts — it crushed our spirits to know we’d never see him again.

So today, take time to give thanks for those who fought and died and paid the ultimate price for our country on this Memorial Day, 2022.

If you want to know the real price of freedom, just gander a look at Arlington National Cemetery.  Look at the cemeteries in France and other parts of Europe where Americans have fallen.

I memorized this poem (Flanders Fields by John McCrae) as a youngster, can’t think of a better way to finish this, these are just two of the verses:

In Flanders fields the poppies blow
Between the crosses, row on row,
That mark our place; and in the sky
The larks, still bravely singing, fly
Scarce heard amid the guns below.

We are the Dead. Short days ago
We lived, felt dawn, saw sunset glow,
Loved and were loved, and now we lie,
In Flanders fields.