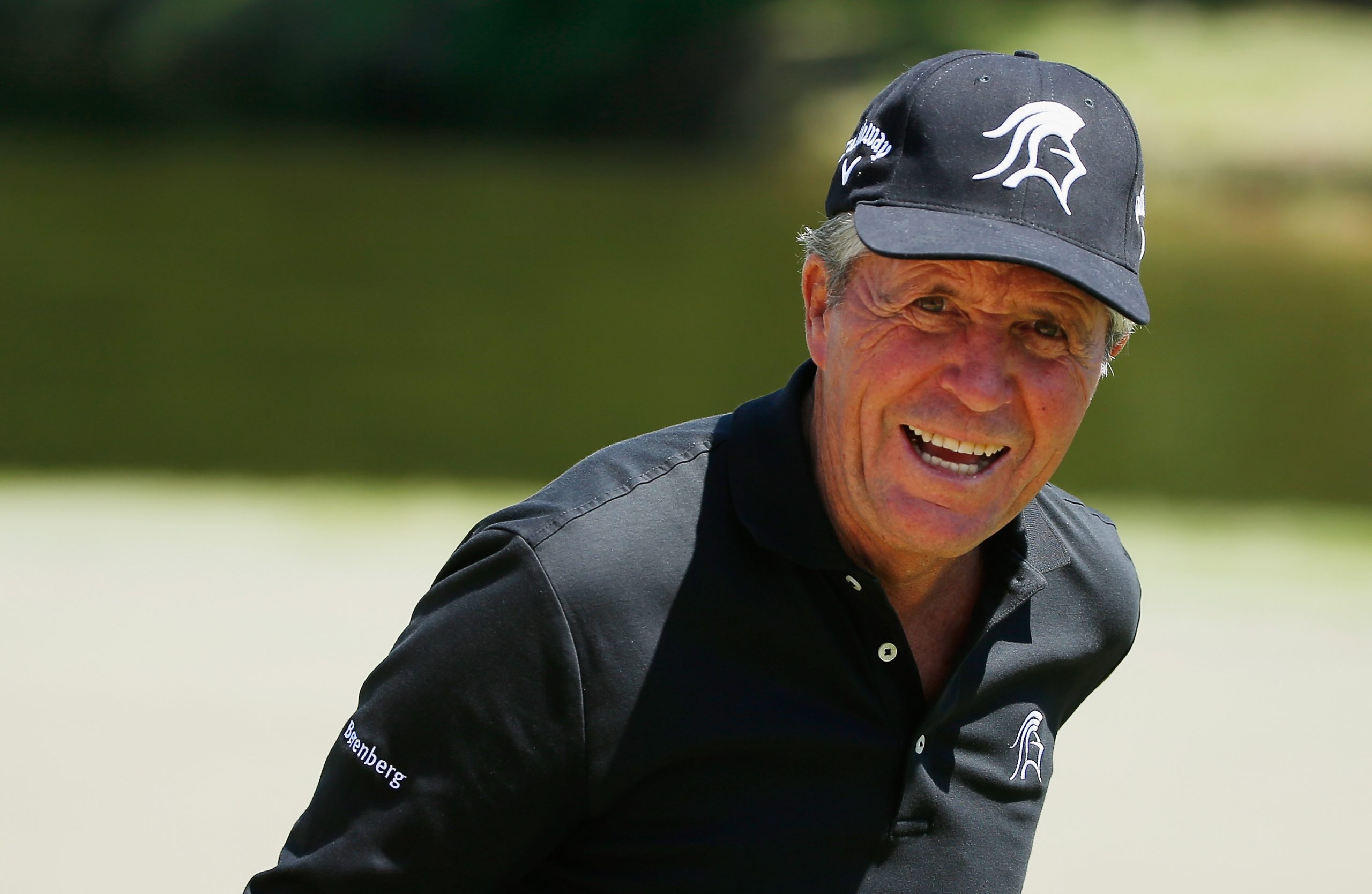 Gary Player has been a paid representative for Saudi Golf.

Things haven’t gone that well the past couple of years for PGA Tour legend Gary Player.

You may or may not recall his son Wayne was banned from Augusta National Golf Club and The Masters for flashing a sleeve of golf balls back when Lee Elder was introduced as one of the honorary starters.

You may or may not recall that Player had to sue son Marc over the “Black Knight” businesses and use of his logo.

Didn’t stop there, Marc retaliated by putting up a bunch of dad’s trophies and memorabilia in a now-infamous online auction.

Now Laddie  (aka Player) has joined the rest of the world in hurling bolders at LIV Golf, which, in and of itself isn’t a bad thing.  But when you take into consideration he’s on the payroll of “Golf Saudi” (along with defector Jason Kokrak), well, thing are a bit contradictory for Laddie.

Laddie was sporting the “Golf Saudi” logo at the last Masters during his honorary starter duties with Jack Nicklaus and Tom Watson.  During the Celebration of Champions this past summer at St. Andrews prior to the Open Championship, Laddie donned an Aramco Team Series (also sponsored by Golf Saudi) patch.

Maybe it’s because he still covets golf course design opportunities in “The Kingdom.”  This past June, he spoke to Sky Sports (Europe’s ESPN) and was gentler about LIV:  “This tour (LIV), which the Saudis – who by the way are our allies, let’s never forget that. I hear a lot of detrimental things being said, but remember this, the players that are playing there now, they need the money. They’ve got families and I don’t blame them for playing there.”

Well now Laddie has changed his tune to match the current atmosphere in golf.

“How can you ever be a champion playing a tour with 54 holes and no cut?” Player said. “What sort of tour is that? 54 holes, no cut, a team event nobody understands. It’s a tour for people who don’t have confidence in their future. They don’t have the confidence they can be winners.  It’s never going to compare to the regular tour. No chance.”

Player also said he would not trade his nine majors for $1 billion, that LIV has “declared war” on the PGA Tour but could never overtake the PGA Tour as the world’s top golf tour, and that LIV players should be banned from the Ryder Cup, Presidents Cup, the majors, “all those things,” he said.  “You can’t have your cake and eat it,” Player added. “That’s the bed you’ve chosen, that’s the bed you’ve got to lie in.”

“Here’s a young man I really thought was going to be a superstar,” Player said. “Now, what sort of future does he have?”

Player also said he didn’t blame Henrik Stenson for defecting.  I don’t blame (Henrik) Stenson for going. He had no money, so he had to go. But this is a potential superstar (Cam),  I think his advisors have given him the wrong advice.”

One voice who has been consistent in his LIV comments has been Davis Love III, who went on a recent podcast with former Tour player Colt Knost and re-affirmed that The Lamest Commissioner In The Land (aka Greg Norman) never had any intention of trying to work with the PGA Tour when it came to LIV.

Love III pointed out how LIV Golf made it a point to go up against events sponsored by longtime PGA Tour partners, such as John Deere and RBC.

“They targeted that early on,” Love said. “So I don’t think there was any way that they wanted to get along or that they wanted to sit down and partner with us.  You can hear it in what he says,” Love said. “They say we’re here to shake it up, to take over, to change golf.  He says things that are so untrue. He gets up there and says, ‘We’re a closed shop’ a few weeks ago. No, I know three guys and what you’re offering them and they’re begging him to come. It’s not a closed shop. And then he tells — I could see — you’ve seen it in the text messages that are released with Sergio. But he tells players they can’t suspend you for one day, much less a year. That’s a lie.”

“Yea it’s totally not true,” Knost replied.  “Guys get suspended all the time,” Love said, finishing his thought.  “We’ve made it easier for European players to play our Tour, not harder, right?” Love said. “We’ve made it easier for international players to get on our Tour.  So we’ve been agreeable and accessible on everything except people that come into the United States and want to play against our weeks on Tour.”

In the meantime, recent LIV defector Harold Varner III has been distressed about the reaction on social media to his defection.

“It sucked. Who likes to be hated?” Varner said. “It’s terrible. I hate being hated. I’d rather not even be known than be hated. So yeah, it was terrible.”

Harold is a fellow ECU alum.  And yes, us ECU people are not happy about Harold defecting.

In spirit, Harold is basically surrendering to the fact that he simply hasn’t been able to win on the PGA Tour although he has made north of $10 million on Tour.

Apparently that wasn’t enough for a guy who said he grew up without much money.

Well, now Harold has the money and it’s the sole reason he went.

And that didn’t sit well with the ECU folks, many of us, also grew up without a lot of money.

Yeah, Harold’s in it for the Infidel Dough.

No Harold, no one really “hates you”.

They hate the fact that you left. And that, basically, makes you, as Mr. Wonderful would say on Shark Tank — “Dead To Us.”

Editor’s Note:  For personal look at Cam Smith, check out this piece made before the 2022 season.  Cam’s a modest kid, his main goal before the season was to simply make it to East Lake.  We believe he went LIV because he is home-sick and wants to basically live back in Australia.