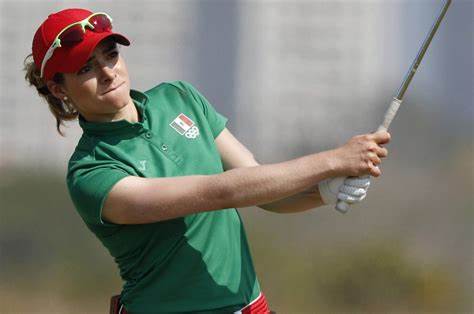 Gaby Lopez was the hottest player on the course Sunday at Highland Meadows and she finished off with three straight birdies that carried her to the championship at the Dana Open.

Lopez put nine birdies on her card that added up to 63 and an 18-under par winning total, a shot better than Megan Khang, whose 64 gave her solo second at 17-under.

“This is going to sound crazy, but today felt more like a Friday round,” Lopez said. “Having that quiet is what we’re working on, and it has paid off.”

She was two shots behind and missed 6-foot birdie chances on the ninth and 11th, but never lost focus of what she was trying to do.

“Doubts come into your mind,” Lopez said afterward. “But my caddie said, ‘We just keep doing what we’re doing. It’s definitely working, and we’re going to commit to that the last hole and see what happens.’  “If you keep it in the present, that’s when magic happens.”

It was her first win since the 2020 Tournament of Champions.

Li, who started the final round with a one-shot lead (14-under), struggled to make birdies. Her hopes effectively ended when she hit into a fairway bunker on the 16th hole, played well short of the green and missed a five-foot par putt.  She birdied the 18th hole for a 70 and tied for fourth.  Li tied for ninth in Canada last week to get into the Dana Open, and now she is eligible to play the LPGA event in Cincinnati next week.

“Yesterday I was a little nervous on the first couple of holes. Today didn’t really feel nervous at all, so that was definitely good,” Li said. “There is lots of lessons to be learned, but today I hit it good and I just couldn’t get a lot of the putts to fall honestly.”

It’s been eight years since Oliver Wilson last won on the DP World Tour but on Sunday in Denmark, he found out he still has what it takes to make it to the winner’s circle.

Wilson birdied three of his final four holes at the Himmerland Resort course and his closing 67 got him to 21-under par, a shot better than Scotland’s Ewen Ferguson.

Wilson started his run to victory with a startling 66-footer for birdie at the 13th then holed one from 14-feet at the 16th then dropped another bomb at 17, this one from 64 feet for the birdie that got him to 21-under.

Wilson’s last win came at the 2014 Alfred Dunhill Links.  He had fallen to 784th in the world rankings but will make a big jump this week.  It’s been a long slide for the Englishman, who hadn’t had a top 10 on the DP World Tour since 2019.

Wilson fought back tears after his win.  “I was so confident. I knew I could get the job done. Everything I’ve done to this point to rebuild my game, I knew I could do it.  And I was so in control, and I said I wasn’t going to cry!  I was so calm there. I almost enjoyed the last hole.”

It was a moment of great relief and satisfaction for Wilson.  “It’s pretty special. I’m so proud of myself. I feel like there’s a lot ahead of me and I’m so pleased to get win number two.  I love this place. I’ve done well here before.  My game has been trending in the right direction. There’s been a lot of good stuff this year, I just haven’t been able to put it all together.”

D.J. Gets His “Break-Through” LIV Win:

It took him a while but Dustin Johnson finally got a victory on the LIV golf exhibition series.

D.J. finished 15-under par, tied with outlier Anirban Lahiri and one of the newest Defectors — Joaquin Niemann.  D.J. ran in a 35-foot eagle putt on the first playoff hole for the win.  It was Johnson’s first win of any kind since the 2020 Masters.

Phil Mickelson continued his dominant play in the series with a tie for 40th.