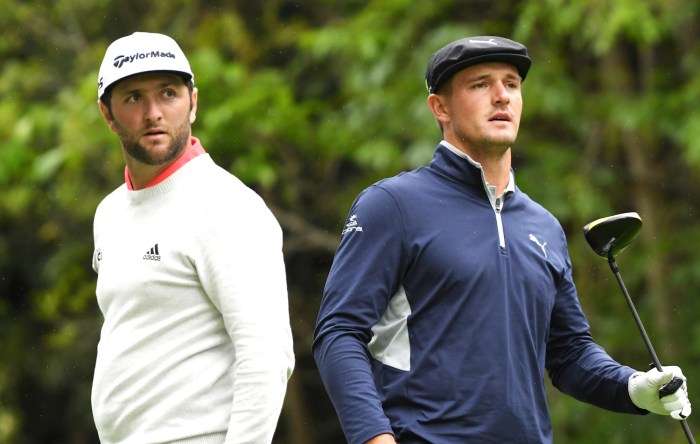 Jon Rahm and Bryson DeChambeau tested positive prior to their planned Tokyo trip.

The “Plague” is still upon us — and it’s got a hold of Bryson DeChambeau and, for the second time, Jon Rahm.

Two of the world’s biggest stars were set to venture to the Land Of The Rising Sun (Japan) to compete for a medal at the Olympic Games and goodness knows, these two big names were bringing a lot of attention to these games that a lot of people simply want to ignore.

That’s pretty understandable considering the logistics of these games — Phase Two of the COVID pandemic has Japan in a nasty headlock and these games are devoid of spectators as well as families and friends of the athletes.

It all makes for a quiet, uninspiring Olympics.  Add the fact that it’s on the other side of the International Dateline and NBC can crow all it wants but most of the results are old news by the time Americans wake up in the morning.

Golf was brought back to life at the last Olympiad where Justin Rose won the Gold, Henrik Stenson took Silver and Matt Kooch The Caddie Mooch Kuchar won Bronze.  None of them are back for these 2020 games that are being staged a year later than scheduled, thanks to “The Plague.”

There are many COVID casualties in these games, a lot of smaller name athletes but now Rahm and DeChambeau are two headliners who will be staying at home, perhaps trying to figure out when and where they may have contracted The Sickness.

For Rahm it’s especially puzzling.  Everyone knows what he went through after he was forced to withdraw from The Memorial.  He was sitting on a six-shot lead with 18 holes to play and Whoop! — positive test.  It’s a head-scratcher that he’s positive again, original talk was that you could not get this stuff twice.  Another troubling notion is that Rahm had received a second vaccination.

No confirmation as to DeChambeau’s status as far as the vaccine goes.  You can imagine DeChambeau’s first reaction could have been:  “Oh hell, please don’t let Koepka know about it!”

Rahm was the favorite to win the Gold for Spain.  “This is a great reminder for all of us that we’re still in a pandemic, things are not over and we still need to fight together to get through this the best we can,” Rahm said.

Rahm had withdrawn last week from the upcoming WGC event in Memphis (St. Jude August 5-8), perhaps anticipating that four grueling days in Tokyo then a long flight back to the U.S. would be a bit much.  But now, with the required quarantine, he’ll most likely be able to tee it up at the St. Jude if he so chooses.

DeChambeau was replaced on the American team by Patrick Reed and the great news for Reed is there will be no spectators at Kasumigaseki Country Club — perfect chance to do as much “sand testing” as he can get away with.  Reed was amped about the last-minute chance to compete.

“Anytime I can represent my country and go play for my country, I’m going to do it no matter what, no matter where it is, no matter what time zone or how I have to get there or anything,”  Reed said.  “When they gave me the name Captain America, the fans did, it feels like an obligation and a duty of mine to go out and play for our country whenever I can and whenever I get the call.  To be able to call myself not just an Olympian but a two-time Olympian is pretty sweet. I look forward to going over there and playing.”

Reed’s timeline is pretty tight.  His three days of COVID testing started Saturday.  He’ll fly from Houston to Tokyo via San Francisco Tuesday night.  He arrives in Japan on Wednesday and won’t even have one practice round to prepare.  He didn’t care.  “Good thing is we’ve played in situations like that,” Reed said of not being able to have a practice round, “but the biggest difference is I’m just going to have to try to tap into that kind of Monday mentality where I didn’t have a practice round, go in there, try to post a low number and stay aggressive.”

Rahm wasn’t replaced, Sergio Garcia already bailed on the games and no Spanish players rank high enough in the Official World Golf Rankings to simply step in.  The Olympic Committee can name someone if it so chooses.

Gotta think based on recent form that Morikawa may be the one most likely to win Gold next Sunday.

And he would be the perfect Gold Medalist.

In the meantime, Phase Two of the pandemic is upon us.