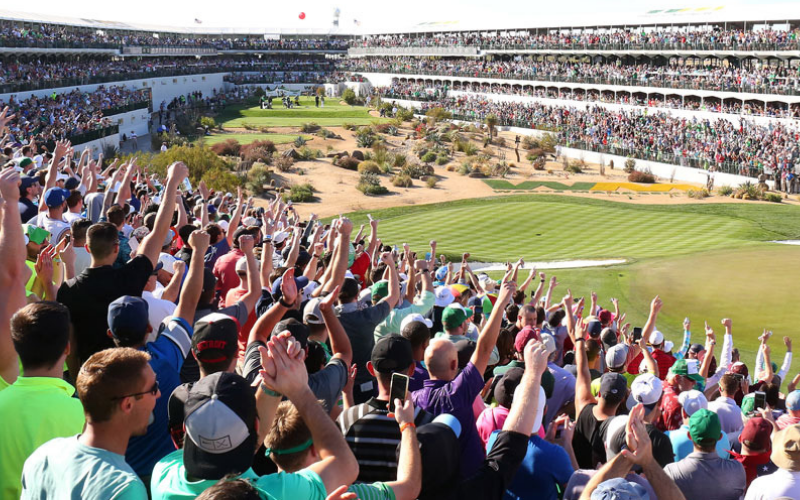 The 16th at TPC Scottsdale has been the biggest party scene on the PGA Tour.

The Phoenix Open, brought to us over the years by the folks at Waste Management has come to be known as “The Greatest Show On Grass.”

It’s more than a show, it’s a massive, week-long party that goes well into the night, every night of the tournament.  It also draw the most people — north of 700,000.

The Thunderbirds are the guys who oversee the event — perhaps the most popular service organization in Phoenix and they have enough clout to raise as much money as they want, akin to the Salesmanship Club in Dallas.

This year’s event falls on February 4-7, a week after The Farmers at Torrey Pines but the bad news is that the COVID pandemic still has its ugly grip on our country and the Phoenix area is no exception to the virus.  Cases have been surging in that area.

After hoping to allow 8,000 spectators at the TPC Scottsdale next month, the Thunderbirds are cutting back.  Tournament director Scott Jenkins said on Wednesday that the daily attendance limited will be reduced to fewer than 5,000.  That will still be the most at a Tour event since the return of golf last June.  There were 2,000 a day allowed at the Houston Open.

That 700,000 number passed through the gates in 2018 and the event stopped releasing attendance figures in 2019, probably because the gate counters broke.

But it’s serious business for Jenkins as the protocols for safety are tight.

Jenkins said the Phoenix Open will implement all of the usual safety protocols including temperature checks upon entry and a mask requirement on the grounds.  “The expansive, 192-acre, open-aired layout of TPC Scottsdale is conducive to social distancing, and combined with stringent COVID safety protocols in place, The Thunderbirds are confident we can conduct a safe and responsible tournament in February,” he said.

World’s No. 2 Jon Rahm, an Arizona State guy, has committed to play along with Brooks Koepka, Rickie Fowler, Matt Wolff and Webb Simpson.

What used to be known as “The Crosby Pro-Am,” now called the AT&T Pro-Am, will have something historic this year.  The Tour has announced that the event will be played without its traditional “Pro-Amateur” format, the amateurs have been dropped from the competition due to the COVID protocols.

The professional portion, featuring 156 players, will be played as scheduled, but over only two courses instead of the usual three. Pebble Beach Golf Links and Spyglass Hill will be used. Monterey Peninsula Country Club the third venue, was dropped.

Sorry about that, Bill Murray.