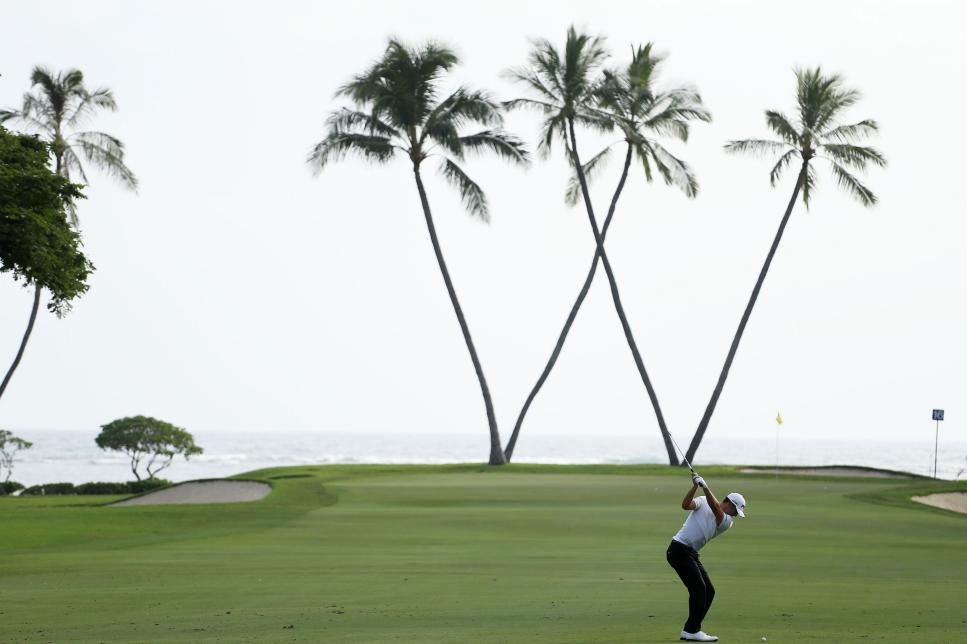 The palm tree "W" stood for "way low scoring" on day one at The Sony.

Joaquin Niemann finished the Tournament of Champions last Sunday with a blistering nine-under par round at Kapalua.

On Thursday, he went on another scoring binge.  All the 22-year-old did was hole a 50-footer for eagle at Waialae’s 18th to start his bid for The Sony Open, first full-field event of the 2021 PGA Tour season, with eye-opening eight-under par 62.

He had company at the top of the leaderboard.  He finished late, as did first-time winning Jason Kokrak, who fashioned his own 62 and with bucket hat-wearing Peter Malnati shooting 62 in the morning wave, it looks like this week’s winner will have to go a lot lower than the 11-under Cameron Smith shot to win last year.

Speaking of the defending champion, he opened with 67 which put him on a direct path to shoot better than he did last go-round on this historic layout, one of the oldest used on the PGA Tour.

It was perfect Aloha day in Honolulu and a lot of players had a big appetite for birdies.  By day’s end, 54 players had shot three-under par 67 or better.  The course was perfect, a lot of flatter greens and those testy Hawaiian winds were no where to be found.  It was another day in paradise, temperatures pushing into the low 80s, the sort of tropical day that can cause a lot of envy back in the great north on the mainland.

There was also a last minute surprise course alteration put in place by PGA Tour officials.

Late Wednesday, they added a row of white OB stakes between the 18th and 10th holes on the course.  It was an eleventh hour move.  Seems with no grandstands up, a lot of players were cutting the corner off the tee of the par five 18th, a dogleg left, firing into the 10th fairway where they could hit as little as wedges into 18 green for good looks at eagle.

Billy Horschel told about his discovery of 10 fairway:

“The funny story was I was playing my Pro-Am yesterday and Justin Leonard who is a really good buddy just happened to be on that green we were playing. He goes, “Hey, do you think about going down No. 10?’  In years past that never even crossed my mind. I’m like, “No.” Then he said, “Well a lot of guys are. They are having like flip wedges into the green.” So, I was like, “Well, maybe I’ll have to look at it when I get on the tee.”

Horschel, who opened with 65 didn’t get that chance as observant officials witnessed what Justin Leonard saw and put an end to that strategy with the white stakes.

That could change a bit on Friday as the winds are supposed to come up in the afternoon but nothing’s a given on the islands.  Things can change in the blink of an eye.

Apparently not much changed for Niemann, who shook off his playoff loss to Harris English last Sunday at the Tournament of Champions and just kept doing what he’s been doing — hitting surveyor-laser tee shots and making putt-after-putt-after-putt.  For the record, all Harris could manage on Thursday was an even par 70 that left him tied for 95th.  Victory hangover?

Niemann has the advantage of late-early tee times over the first two days.  He can pick up on Friday morning where he left off Thursday afternoon.

So keep an eye on Joaquin.