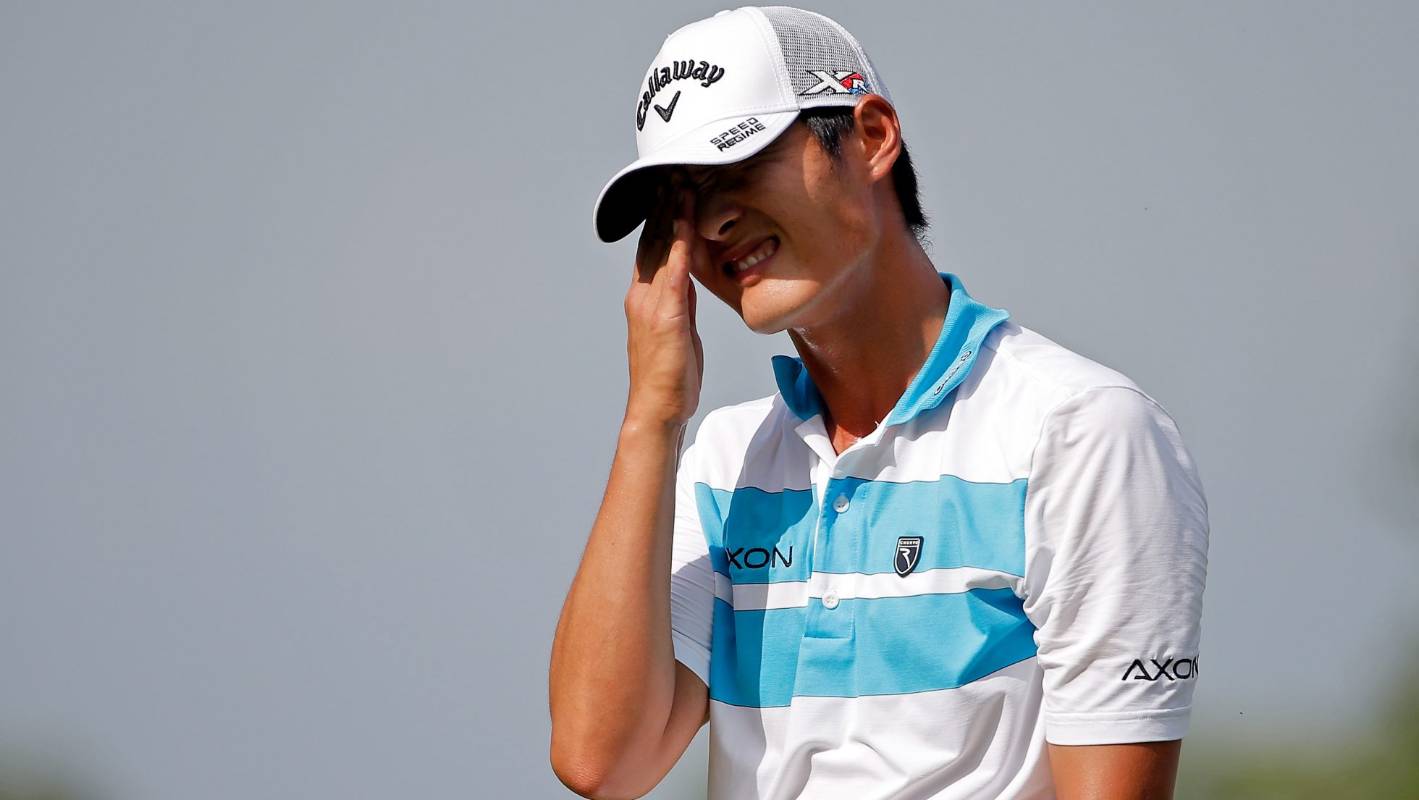 All one need do is see his behavior on the 18th green at Winged Foot on Saturday as he closed out his third round.  Lee was three-over for the day, a good round by anyone’s standards. He faced a four-footer for par and what transpired was unfathomable.

Lee missed his putt, then the second, then went nuts, not caring anymore.  He turned into a hockey player as he aimlessly slapped his ball around the hole until he finally finished with a quintuple-bogey NINE!

You can witness the fiasco with this link.

After rounds of 70-75-78, Lee withdrew from the tournament citing a “wrist injury.”  What he really did was call it quits, simple as that.  There was no wrist injury.

Question is, should Lee face some sort of discipline?

If we ran the USGA, he’d be banned from the U.S. Open for two years.

John Pak finished as the low amateur at Winged Foot.  He shot rounds of 69-76-79-74.  He had no competition for the honor as he was the only amateur to make the 36-hole cut.

Pak joined the Florida State University golf team in 2017.  He’s a three-time All-America.  He won the Seminole Intercollegiate in 2018 and 2020 and was the ACC individual champion in 2019.  He’s currently the eight-ranked amateur in the world and was ranked No. 1 in the first-ever PGA Tour University rankings.

You might say the future is very bright for Pak.

No. 1 Dustin Johnson finished five-over (73-70-72-70) and failed to shoot under par in any round at Winged Foot.  No. 2 Jon Rahm was a distant 10-over par (69-72-76-73).  After putting himself in decent position through 36 holes, Rahm shot nine-over for the weekend.  No. 3 Justin Thomas fell on his face in the middle rounds.  After a spectacular 65 to open he followed with rounds of 73-76-72 to finish six-over.  Rory McIlroy could have been a contender but face-planted himself right out of the box on Sunday.  He hit the fairway at the first, hit the green then proceeded to four-putt for double-bogey and that set the tone for Rory’s round.  McIlroy finished with 75 to go with rounds of 67-76-68 and he ended up five-over par.

Bryson DeChambeau had a huge payday on Sunday, a record payout for the championship — $2,250,000.  Matt Wolff, a distant second, six shots behind Bryson, had a nice consolation prize — $1,350,000.  Wolff, playing in just his second major championship, added that runnerup to a fourth place finish at the PGA Championship.

Bryson DeChambeau averaged a mind-numbing 336.3 yards off the tee at Winged Foot.  Apparently he’s not satisfied.

DeChambeau is now turning his attention to the November Masters where he plans to bomb Augusta National, possibly with a 48-inch driver.

“Length is going to be a big advantage there. I know that for a fact,” DeChambeau said after hoisting the U.S. Open trophy. “I’m going to try and prepare by testing a couple things with the driver.

“We’re going to be messing with some head designs and do some amazing with things with Cobra to make it feasible to hit these drives maybe 360, 370.” he said. “Maybe even farther. I don’t know.”

The first hole at Winged Foot ended a lot of hopes on Sunday but Harris English perhaps got the worst break.  His opening drive sailed a bit to the right of the fairway and his ball was never found despite a desperate search over the three-minutes now allowed.  He was carted back to the tee and finished with a double on the hole.  Still, he played the final 17 holes in just one-over and his closing was good for a solo fourth place finish, his best-ever showing in a major championship.

As long as Bryson is off the tee, runnerup Matt Wolff can move it big time.  At the ninth hole, a par five, DeChambeau unleashed his best but Wolff’s drive went past him by at least 10 yards.  Both players eagled the hole, hitting short irons into the 565-yard par five.