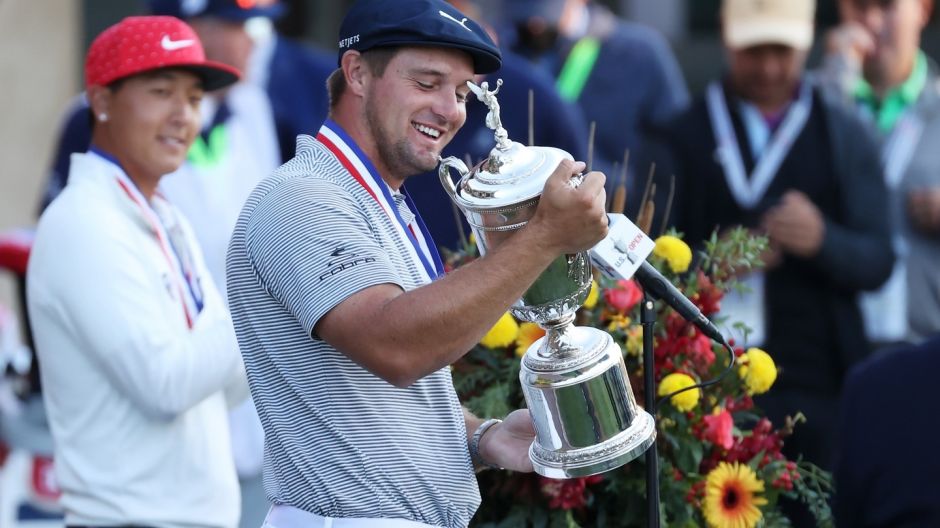 Bryson DeChambeau was without peer on Sunday at the 120th U.S. Open.

Nothing, absolutely nothing could stop Bryson DeChambeau from his U.S. Open mission on Sunday.  Not the nasty rough at Winged Foot, not the slick greens, nor the super-narrow fairways and not even the challenging breezes.  No, nothing could stop him on his way to making the 120th U.S. Open Championship a complete runaway.

DeChambeau is science, technology, engineering and math, combined with hard work and pure desire to be better.  He has harnessed physics and pure muscle and combined those to create an approach to golf unseen since the game was born in Scotland.

The 27-year-old man-beast conquered Winged Foot for a decisive win.  He was the only man in the field to shoot under par in the final round, taking on those long, testy holes and getting the best of them.  He added a mind-boggling three-under par 67 to his previous rounds of 69-68-70 and was the only player without an over-par 18 hole score.  It all added up to a six-under par total of 274 on a course where most predicted a winning score well over par.

In the end, it was a runaway.  He was six better than runnerup Matt Wolff, who was long on enthusiasm and desire but short on experience in a U.S. Open.  Wolff went into the final round with a two-shot lead over Bryson.  He was five-under, DeChambeau three-under.  By the fourth hole, the two were tied at four-under and by the fifth, DeChambeau took the lead and never looked back.  Wolff did his best to challenge DeChambeau and the most incredible hole of the day came at the par five ninth where both players hit the green in two.  DeChambeau ran in a 38-footer for eagle and Wolff matched him from 11 feet.  At the turn, it was still close.  DeChambeau was five-under, Wolff four-under and they eliminated all the other hopefuls.

After Wolff bogeyed the 10th and DeChambeau birdied 11, the handwriting was on the wall.  DeChambeau was firing on all cylinders and Wolff was sputtering.  Another bogey from Wolff at 14 just about ended it but a double by the 21-year-old at the 16th assured DeChambeau of his first major title.

“On nine is when I first through, this can be a reality,” DeChambeau said after the battle.  “But I told myself ‘nope, we gotta focus, focus on each hole.'”  His focus was incredible.  He parred every hole after the birdie at 11, including a nifty downhill 12-footer on the 72nd hole to put an exclamation point on it.

“I honestly can’t believe it,” DeChambeau said before heading to the trophy ceremony.  He stood in front of a huge video screen for a face-to-face with his parents.  Tears flowed as he told them; “Thank-you for sacrificing everything for me.”

Later he thanked his team, his sponsors and swing coach Chris Como.  “He’s done so many great things for me — has allowed me the confidence to go forward.”

Going forward, DeChambeau joined elite company with the U.S. Open title.  He is just one of three to win an individual NCAA title, a U.S. Amateur title and the U.S. Open.  The other two?  Jack Nicklaus and Tiger Woods.  “Jack and Tiger, they’ve pushed me along to be a better golfer,” DeChambeau pointed out.

DeChambeau silenced the doubters, who felt his weight gain, his same-length clubs with big fat grips, his unorthodox swing and approach to the game simply wouldn’t work in major championship settings.  He proved everyone wrong.  Along with his power, he displayed an incredible touch around the greens all week and sank clutch putt after clutch putt.

No one out-worked him.  He was the last man on the range every night.  He stayed late Saturday after describing his third round driving as “pathetic.”

He did it his way.  He hit just 23 of 56 fairways for the week and no one would have thought that a winner could do that.

Winged Foot was basically undefeated before Sunday.  No one had gotten the best of this tough, historic test.

Bryson DeChambeau did.  He beat up Winged Foot.

And it wasn’t a fair fight.