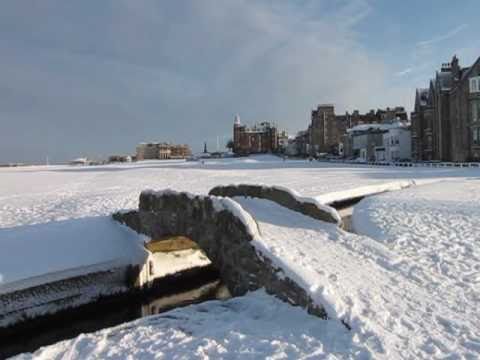 Snow dashed any hopes of golf at St. Andrews even without restrictions.

Will Golf Return To The United Kingdom In March?

The United Kingdom takes this pandemic stuff very seriously and golf has been off the table for quite a while on the other side of the pond.

The London Times has given golfers some hope as it has reported that Prime Minister Boris Johnson will announce an easing of restrictions next week that can re-open golf courses.  Schools are expected to re-open in early March.

A second easing of social distancing rules is expected at the end of next month with the resumption of outdoor sports – such as golf and tennis – two people from different households,” said the newspaper’s report.  “Ministers have drawn up a four-speed plan for restarting the economy, with all shops, pubs and restaurants open anywhere between early May and August.

“The whole country will move together through a series of national tiers – which may be different from those in operation last year – with reviews every fortnight,” the Times reported in its Sunday editions

Golf courses in England have been closed since the most recent coronavirus mitigations measures came into effect on January 4.  This is in spite of intense lobbying by the All-Party Parliamentary Group for Group, which recently presented scientific evidence to support claims that playing golf can be done safely.

As soon as he announced that he’d be leaving his post as LPGA Commissioner, smoke signals immediately began pointing toward Michael Whan as the next CEO of the United States Golf Association.

The USGA made it official today — Michael Whan will be succeeding Mike Davis to run the organization.