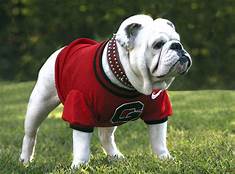 Posted By: Tom Edringtonon: September 21, 2020In: In The Doghouse3 Comments

Apparently the talking heads at NBC that covered the U.S. Open this past week were totally obsessed with the term “Georgia Bulldogs.”

What got them started on that track was the group that featured Brendon Todd, Harris English and current University of Georgia senior Davis Thompson.  What made it even worse is that Thompson, for at least 30 minutes, led the tournament on day one, getting to as low as four-under par early on the back nine.

Thompson was a bit overconfident after his opening 69, claiming “I’m here to compete.  I didn’t come to be a tourist.”  He spoke to soon, his second round 78 sent him home early.

As for Todd and English, they had a good run, thus continuing the “Georgia Bulldog” mentioning by all the NBC guys who had a mic in front of them.