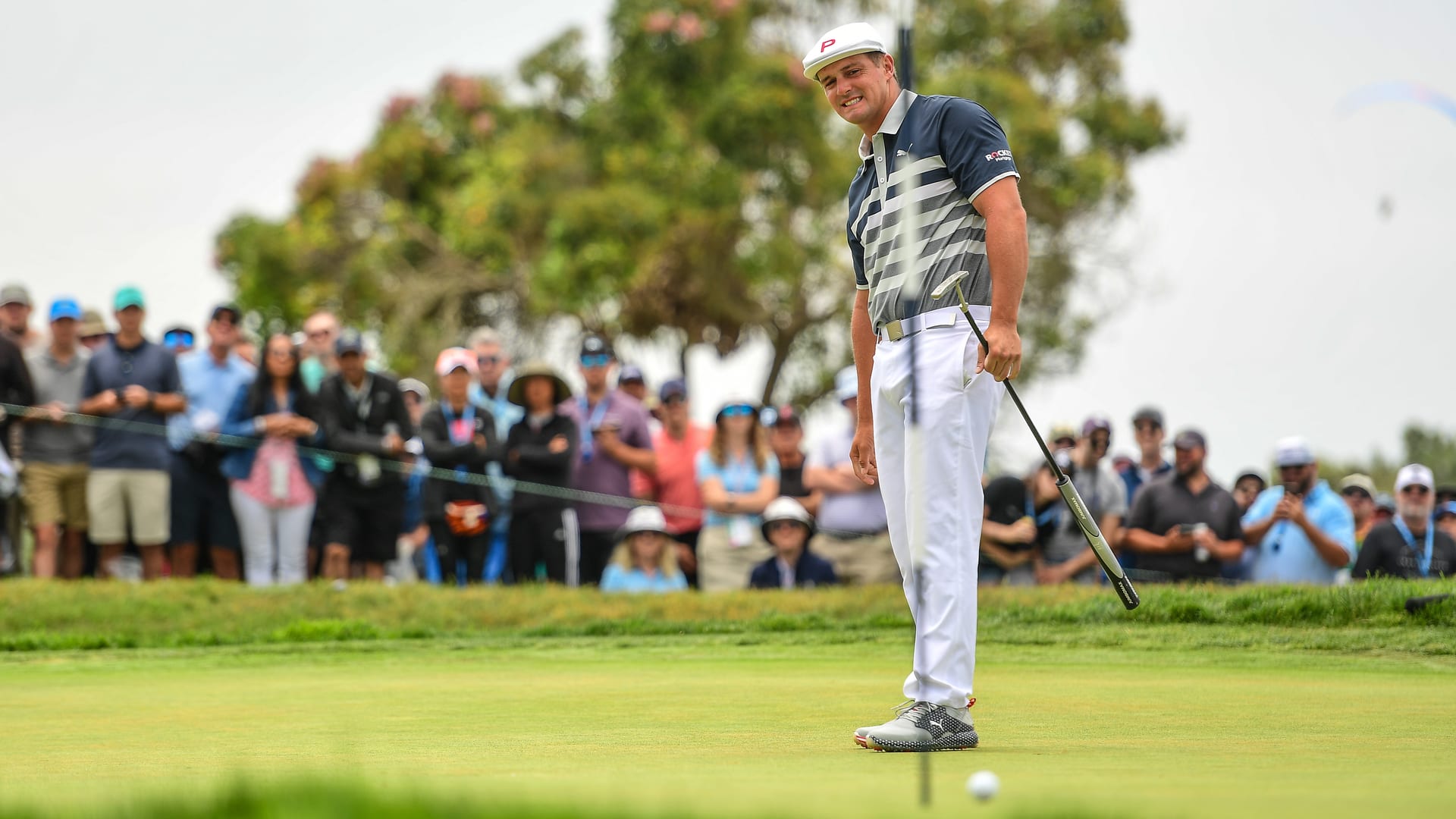 Bryson DeChambeau's final nine 44 will no doubt be mentioned by Brooks Koepka at some point in time.

If the final measuring stick in any feud is the final score, Brooks Koepka was the winner in this showdown between the two at Torrey Pines.

Brooks was the winner because he shot a final round 69, despite a bogey on the easy 18th.  He shot two-under for the season’s third major and tied or fourth with Collin Morikawa at two-under par.

That 69 was a full eight shots better than Bryson’s closing 77 that featured a nuclear meltdown on the final nine holes by the PGA Tour’s Mad Scientist.

Bryson’s smash-and-find-it worked pretty well for 10 holes, he was five-under par and tied for the lead with eventual runner-up Louie Oosthuizen.  Bogeys at 11 and 12 dropped him back to three-under but he had the par five 13th next, where he could make birdie.  Or not.  It took DeChambeau five shots just to get his ball on the green and two-putts from 36 feet added up to double-bogey seven and dashed his hopes for a repeat U.S. Open win.

To make matters worse, he hooked his tee shot into the barranca on the 17th and by time he walked off that green, he put a quadruple-bogey eight on his scorecard.  He shot 44 coming home for 77 and a three-over total that dropped him all the way down to a tie for 26th.

Of course Bryson made a few excuses afterward:

Here’s how the rest of the week looked in this “pseudo-feud”:

Brooks looked totally comfortable out there, zoned in.  He hit only two bad shots all day and it was a pretty stress-free 69 — could have been a lot better.

Bryson, on the other hand, is going with his game plan from Winged Foot.  He’s going to blast his driver as far as he can and take it from there.  He started on the first tee, birdied the second hole to get under par but then took back-to-back bogeys.  Another bogey at the seventh then a birdie at eight left him one-over at the turn.

By day’s end, Bryson had to birdie the 18th simple to shoot 73 which left him in a tie for 61st.  Bryson had problems with accuracy off the tee and control of his irons.  Didn’t seem like anything went his way.

Fortunately both managed to get their rounds in and didn’t have to go back at oh-dark-thirty to finish the first round.

But in this duel:  First Round Belongs To Brooks

Day two was no contest.  Bryson rallied and shot a two-under par 69 to get back to even par.  What’s crazy is that Bryson says he found his form in a Thursday night dream:

“It’s one of those things I was sleeping and it came to me in the middle of the night, woke up and I was like, hmm, I’m going to try this,”  Bryson said.  “I went out, and my intuition is pretty good, so I went out and tried it and it worked.”

Brooks struggled after a good start.  He made two early birdies, got to four-under for the tournament but struggled over the final 12 holes.  He missed a five-footer for birdie at the 18th and had to settle for a two-over par 73.  Too many drives in the rough and he hit only seven greens on day two.

After 36:  Second Round To Bryson

No contest here.  Bryson worked his way around Torrey Pines and his three-under par 68 put him in position to make it two-straight U.S. Open titles.  He’s at three-under par just two off the lead.

As for Brooks, two bogeys coming home on the final nine hurt his chances and dropped him from red numbers back to even par, meaning he’ll have to shoot something Johnny Miller-like if he expects to win on Sunday.  He signed for an even par 71.

After 54:  Third Round To Bryson

After her 62 on Saturday, Nelly Korda took a three-shot lead into the final round of the Meijer Classic on Sunday.

It looked like a stroll in the park for the world’s No. 4 but Irish rookie Leona Maguire wouldn’t let that happen.

Korda looked like she wrapped up the title at Blythefield Country Club when she hit a six-iron from 179-yards out on the par five 14th to 14 feet and made the eagle putt to get to 24-under.  She added another birdie at the par four 15th when she holed  a nice 18-footer from the back fringe.  She was 25-under and three shots clear of Maguire with just three to play.

The door opened  bit for Maguire at the 16th when Korda three-putted from 25 feet and Maguire made birdie to cut the American star’s lead to just a shot.  Both parred 17 then Korda closed with a birdie at 18 for a closing 67 and a tournament record 25-under par winning total.

Maguire finished two back, posting 66 for 23-under par.

“Actually, really enjoyed today,” Korda said. “Honestly, there has been times where on Sundays I really like haven’t enjoyed it, like the stress kind of ate me and I didn’t stay in the moment and enjoy playing golf on a Sunday in a final group.  But today I really enjoyed it and it was actually a really good battle between Leona and I.  She definitely kept me on my toes.”

This was Nelly’s fifth career LPGA win and her second this season.  She’s the only multiple winner in 2021.   She bounced back after missing the cut two weeks ago in the U.S. Women’s Open.

“If you told me at the U.S. Open that I was going to shoot 25-under I would be like, `Yeah, right.'” Korda said. “But I did a good bit of work back home. My dad was at every practice, a little boot camp with my dad.”

The ladies now prepare for this week’s third major of the season — the Women’s PGA at the Atlanta Athletic Club.