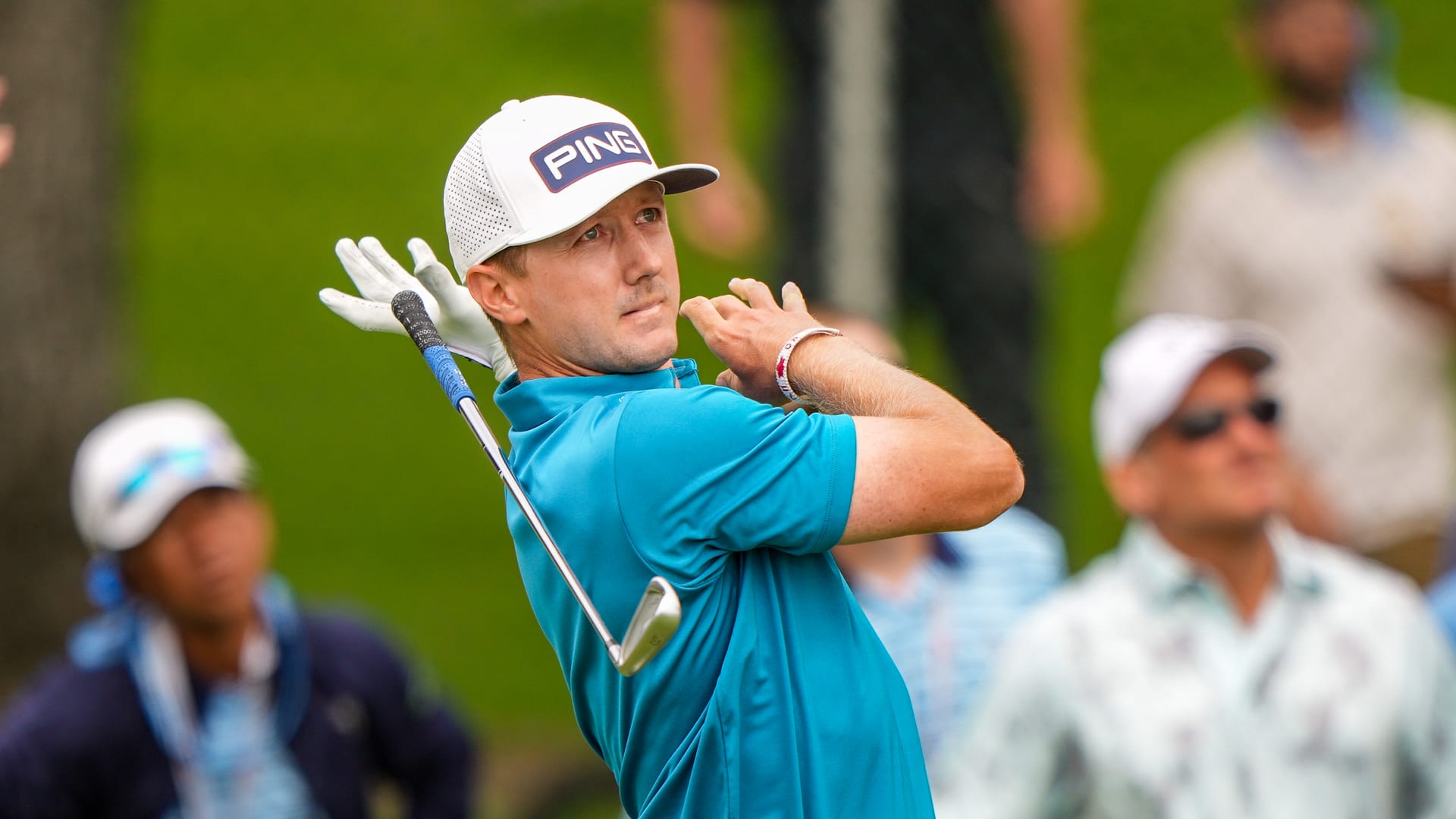 Mackenzie Hughes saw his tee shot at the 11th hit a cart path and stick in a tree limb.

Overnight co-leader Mackenzie Hughes was a huge underdog going into the final 18 holes and he hung around until he got perhaps the worst break of the tournament Sunday at the 121st U.S. Open.

Hughes birdied the ninth at Torrey Pines’ South Course to make the turn one-over and four-under for the tournament.  He parred the 10th then at the 11th, things fell apart in a big way.

Hughes pulled his tee shot on the long par-three and in the televised scramble to see where his ball finished, the fans provided the giveaway — it was stuck in a tree.

A video replay, however, showed that the ball didn’t end there on the fly.  It first hit the cart path, bounced skyward and finished stuck in between two limbs — something that has long odds of happening on any given day, much less during the final round of a U.S. Open.

Hughes was able to identify his ball and took the penalty stroke. He eventually made a double bogey five and fell back to two-under.  Hughes suffered another bogey at the 12th and added two more at 14 and 15  to shoot 41 on the final nine holes.

“I mean, it’s like one-in-a-million break.  I’ve played golf my entire life, I’ve never had a ball stuck in a tree,” Mackenzie said after shooting 77 to finish tied for 15th. “For it to happen on the back nine of a U.S. Open felt unfortunate because if that ball is over there in the grass, I’ve got a chance to get up and down for par, and that’s a different outlook than trying to get up and down for bogey, and I ultimately made a double there.

“Just yeah, not my day, but I’ll learn a lot from it and hopefully be back soon.”

As if Sunday at the U.S. Open isn’t crazy enough, a nit-wit spectator ran onto the course at the par five 13th, reached in his pocket, dropped a ball and hit a shot with an iron he smuggled into the tournament.  The fool danced around, made another swing then tried to escape as security swarmed him.

They took him down, face down and the police took him away.

This was Mike Davis’ final U.S. Open as CEO of the USGA.  Michael Whan takes over that spot this week as Davis heads for the world of golf course design.

Davis accomplished a lot in his time with one of golf’s two major governing bodies.

Sixth Runner-Up For Oosthuizen In A Major:

Louis Oosthuizen is now the owner of sixth second place finishes in major championships after he came up a shot short on Sunday.

While Oosthuizen already has one major — the 2010 Open Championship at St. Andrews.  Louie also has the runner-up Grand Slam, finishing second once in every major championship during his career.

“I didn’t win it. I’m second again,” Oosthuizen said Sunday. “No, look, it’s frustrating. It’s disappointing. I’m playing good golf, but winning a major championship is not just going to happen. You need to go out and play good golf. I played good today, but I didn’t play good enough.”

Another U.S. Open Disappointment For Mickelson:

Sunday wasn’t a great day for hometown guy Phil Mickelson at Torrey Pines.  Lefty closed with a 75, shot 11-over par and tied for 62nd.  Good news is that with his PGA victory at Kiawah, he’s exempt for the next four U.S. Opens.

Mickelson did say he thought the setup on the South Course was one of the best he’s seen at a U.S. Open.

“Obviously I’m disappointed I didn’t play better,” he said. “But I’m very surprised that, in the 30 years that I’ve played the U.S. Open, this is the best I’ve seen. I thought they did a remarkable job, and I’m really proud and happy that it’s here at Torrey.

“That type of setup allows the players who are playing well to make up ground or separate themselves from the field,” Mickelson said.  Mickelson’s review echoed a number of player comments this week about the setup, with Mackenzie Hughes, one of the 54-hole co-leaders, even describing it as “perfect.”

“They just did such a great job here,” Mickelson said. “I’m very impressed.”

Jon Rahm’s positive COVID test cost him $1,674,000 and a Tour title two weeks ago at The Memorial but on Sunday, his first place winner’s check was for $2,250,00 — which no doubt soothes the bank account.

Twenty-Four Days To The Open Championship:

The 2020 championship was cancelled due to COVID and wasn’t rescheduled meaning Shane Lowry got to keep the Claret Jug for an extra year.