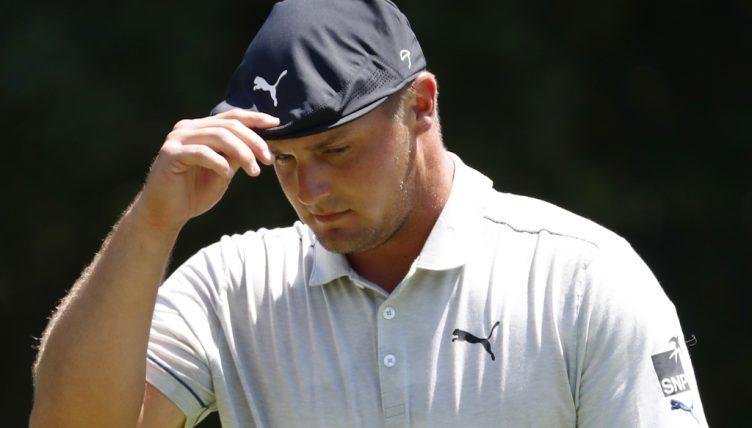 Bryson DeChambeau was taunted by rowdy fans with chants of: "Brooksie-Brooksie!"

DeChambeau vs. Koepka Escalates With Rowdy Fans At Memorial

The pseudo feud between Bryson DeChambeau and Brooks Koepka went to another level during the second round of the Memorial last Friday.

Said fans were ejected at some point and Koepka went on social media, offering ejected fans free beer from one of his sponsors.

“I think that’s something that the Tour needs to handle, it’s something I can’t control,” DeChambeau said. “I tried to take the high road numerous times and I think that, from my perspective, I’ll continue to keep doing so and people are going to do what they want to do.”

As far as Koepka offering free beer to those escorted from the course:

“I think that’s something that the Tour needs to handle, it’s something I can’t control,” DeChambeau reiterated.

DeChambeau said his representatives have spoken with the Tour about the incident but didn’t offer any details.  “I think it’s something along the lines of how the Tour wants players to act,” DeChambeau said. “If he keeps talking about me, that’s great for the ($40 million player impact program) fund.”

As far as the “Brooksie” chants, DeChambeau referred to them simply as “flattering.”  DeChambeau added, “people are going to do what they want to do.  So it is what it is.”

The German COVID-regulation shortened European Open wraps up today and any of eight contenders can walk away with the title on Monday.

Aussie Maverick Antcliff and Brit Matthew Southgate are tied at the top at five-under par through 36 holes — both players are looking for their first European Tour win.  Antcliff turned in a 68 on Sunday, Southgate signed for 60.

Antcliff has dropped only one shot in 36 holes birdied two of his final three holes on Sunday.

“I’m hitting fairways, greens, if you get a good number or angle take advantage of it,” Antcliff said.  “Keep doing the same. Good golf gets you into good positions, keep doing that, good results happen.”

Southgate had four birdies and two bogeys in his round.