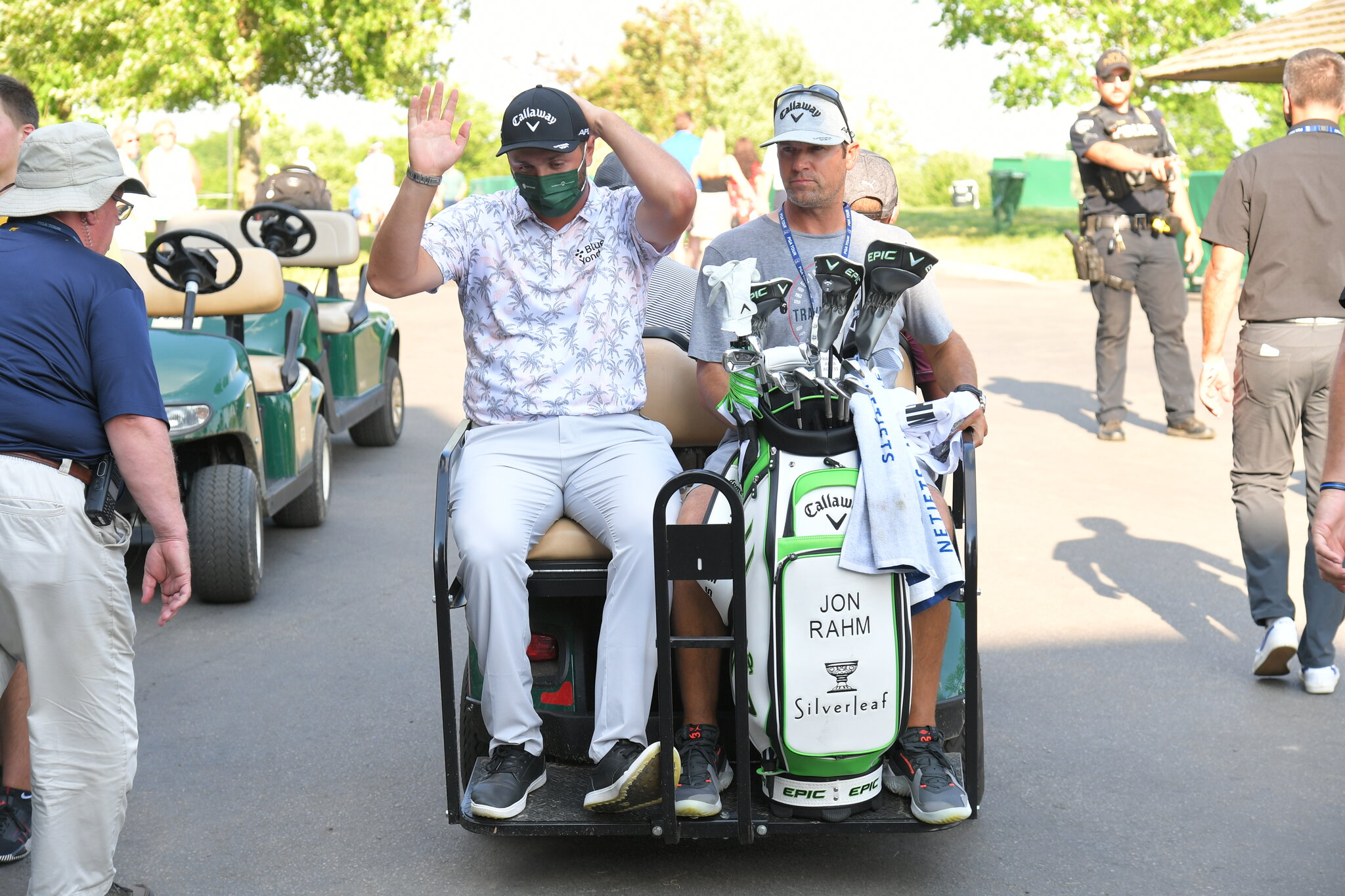 Put an asterisk next to Patrick Cantlay’s name as the winner of the 2021 Memorial Tournament.

Jon Rahm was absolutely crushing the field and his Saturday 64 put him at 18-under par — in total control until a positive COVID test from Saturday morning yanked him from the competition — setting the stage for a mistake-filled Sunday duel between Cantlay and playing partner Collin Morikawa.

There wasn’t much to look at during their foray over the renovated Muirfield Village.  The two principals had only eight birdies between them and they combined for six bogeys over a forgettable final round that saw both shoot 71 and tie at 13-under par after regulation play.

It was a quick playoff.  Cantlay scrambled for par then watched Morikawa miss a seven-foot par putt to hand the title to Cantlay, his second at Jack Nicklaus’ event.  He hoisted the trophy in 2019.

This one will be remembered for Rahm’s exit from the tournament after he made nine birdies on Saturday (more than Cantlay and Morikawa combined on Sunday) and shot 64 to finish at 18-under par, tying the tournament’s 54-hole record.

As he walked off the 18th green, PGA Tour officials came up to him and delivered the crushing news, right there in front of the crowds and the CBS announcing crew.  There was all sorts of speculation until the Tour finally announced Rahm’s positive COVID test.

“I don’t know how you send him a trophy for three-quarters of a tournament but I’d certainly like to,” Nicklaus said of Rahm’s misfortune.  Nicklaus was also affected by the scene of Tour officials confronting Rahm as he left the 18th on Saturday.  “I don’t think I’ve seen anything that affected an individual that much. Particularly in that position in the tournament. That was a tough thing to swallow for everybody,” Nicklaus observed.

The positive test was very costly for Rahm.  First place money paid $1,674,000 to Cantlay and a victory by Rahm would have moved him to No. 1 in the Official World Golf Rankings.

With the U.S. Open starting in just 11 days, Rahm will be in isolation.  He’s required to isolate for 10, 24-hour periods.  That means he may be able to show up on Tuesday morning at Torrey Pines, giving him very little preparation time for the season’s third major championship.

At the end of the day, Rahm’s home state of Arizona was offering the vaccine to adults starting back on March 24.

One bit of information that came out of this mess is that only about 50 percent of Tour players have been vaccinated.

But Ames came on strong over the final 18 holes at the Wakonda Club in Des Moines for his second PGA Tour Champions title.  , taking advantage of Tim Herron’s final-round collapse.

A four-time winner on the PGA Tour, Ames won the 2017 Mitsubishi Electric Classic for his first senior title. The 57-year-old naturalized Canadian citizen from Trinidad finished at 12-under 204 after closing with a five-under par 67.  Ames edged Mike Weir by a shot.

Herron bogeyed three of his final five holes and finished with a 76 that left him tied for third at 10-under par with Doug Barron and Willie Wood.

“Everybody else kind of faltered coming in, unfortunately for those, but fortunate for me,” Ames said. “I had a second Atlanta and I had three other top-10s on top of that, so things were starting to shape up. It’s just a matter of putting things together and obviously getting fortunate, which is what happened this week for me.

“It’s the kind of golf course that has to grow on you,” Ames said “You definitely have to play it a few times to understand the nuances of it, the bounces, where to hit it when it’s running: I think this week the superintendent did a fantastic job getting the golf course in the best shape I’ve seen it for the years that I’ve played it.”