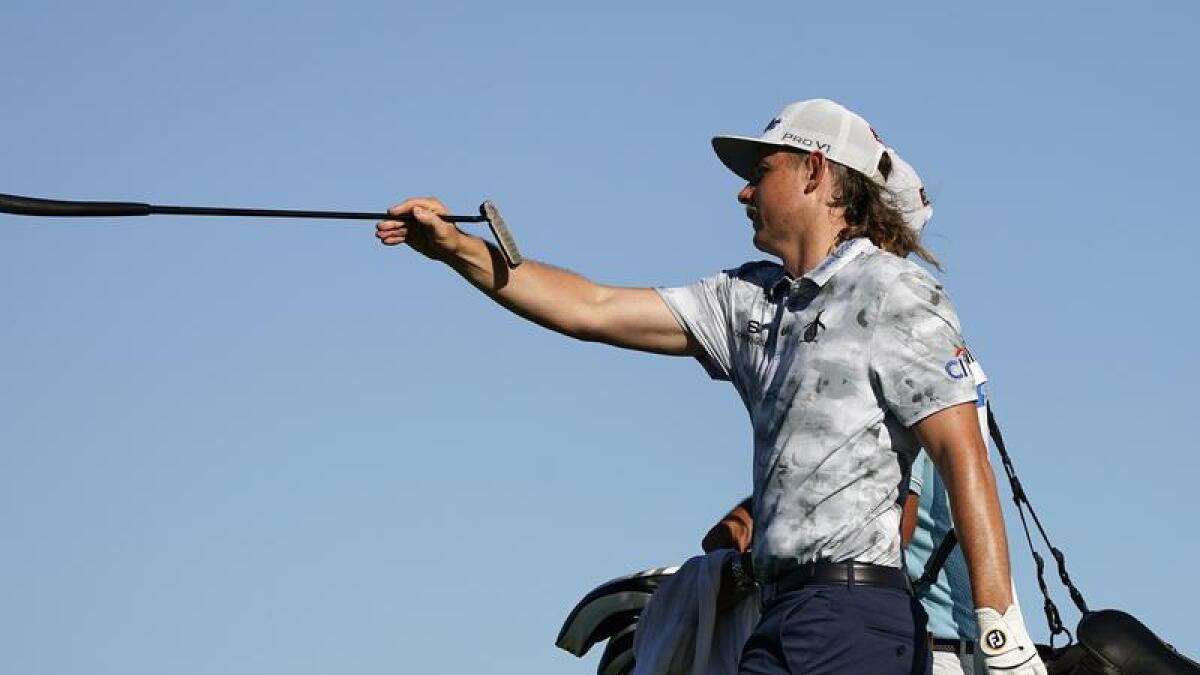 Cameron Smith's putter was a magic wand at Kapalua.

Better yet — fear that putter that Aussie Cameron Smith wielded like a man possessed all week at the Tournament of Champions.

Smith put on a four-day show on Kapalua’s Plantation course, including a closing eight-under par 65 on Sunday and emerged the winner in an intense head-to-head matchup with the world’s No. 1 — Jon Rahm.

By day’s end, both Smith and Rahm shattered the PGA Tour 72-hole scoring record set at this event on this course by Ernie Els in 2003 when the Big Easy shot 31-under par.

Smith’s birdie at the 18th got him to 34-under and edged Rahm (33-under) at the finish line.  If that wasn’t enough, a crazy back nine run that included two eagles by another Aussie — Matt Jones — got him to 31 under and all that got him was third behind Smith and Rahm.

“Mate, it was intense. Jonnie and I played well the whole day,” Smith explained. “We had Matty (Jones) in the group in front lighting it up, as well. So, yeah, unreal round, something I’ll never forget for sure.  We spoke about it earlier in the day.  We wanted to get to 35-under.  We missed it by one.  So, I mean, in that sense, disappointing, but it’s great to come away with the ‘W,” Smith said in somewhat of an understatement.

It was a pure mano-a-mano showdown on the par 73 Plantation course, rendered defenseless with hardly any winds on three of the four tournament days along with left-clean-and-place rules for the first 36 holes.

“When you come to a golf course where the only defense is wind, just, at least you expect 20-miles per hour here, and we usually shoot 20 to 26 under and win the tournament. And you get the same golf course with no wind, what do you expect?  You have 50-yard fairways, soft greens, we’re going to shoot low. It’s just kind of how it goes,” was how Rahm explained the scoring barrage by the entire field.  “It felt really strange to shoot 33-under and lose by a shot,” Rahm added.  “Those first six holes are where I lost the most amount of shots.  I shot seven-under, he shot eight-under.”  Rahm also said he was most pleased with his iron game but added he’s still warming up for the coming season.  “It’s still far from where I want it to be.”

Rahm spoke about the first six holes.  The hole that made the one-shot difference was the short par four fourth.  Rahm pulled his tee shot into the thick, high native grasses, chopped out then stuffed a wedge to four feet from 63 yards out to save par.  On the other hand, Smith, from 118, hit his approach to five feet, made his first birdie of the day, got ahead of Rahm by a shot and never surrendered that lead the rest of the way.  That singular hole was the difference maker on a day where neither player made bogey.

As for Jones, winner of the 2021 Honda, he went on a silly back nine run to insert himself into the conversation.  First, he jarred a wedge shot from 85 yards for eagle at the 13th, then saw his second to the par five 15th settle inside four feet and he made his second eagle of the inward nine.  Just for good measure he ran in a 51-footer for birdie at 17 then closed with birdie for 30 on the par 37 back nine and a 61.  Jones shot 62-61 (23-under) on the weekend and still didn’t win.  He finished 32-under to make the top three finishers all breaking Ernie Els scoring record.

Patrick Cantlay knocked off the rust from his long layoff and played well enough to shoot 26-under and finish solo fourth.  His score beat last year’s winning total (25-under) by Harris English.  Collin Morikawa started getting his game prepped.  He closed with 62 Sunday and tied for fifth with Justin Thomas and Daniel Berger at 25-under.

But this show belonged to Smith, runner-up at last year’s Masters and he will now jump into the world’s top 10 when the new rankings come out this week.

He’s perhaps the Tour’s most under-rated player.  But when he drives it well, he can light it up with that putter.