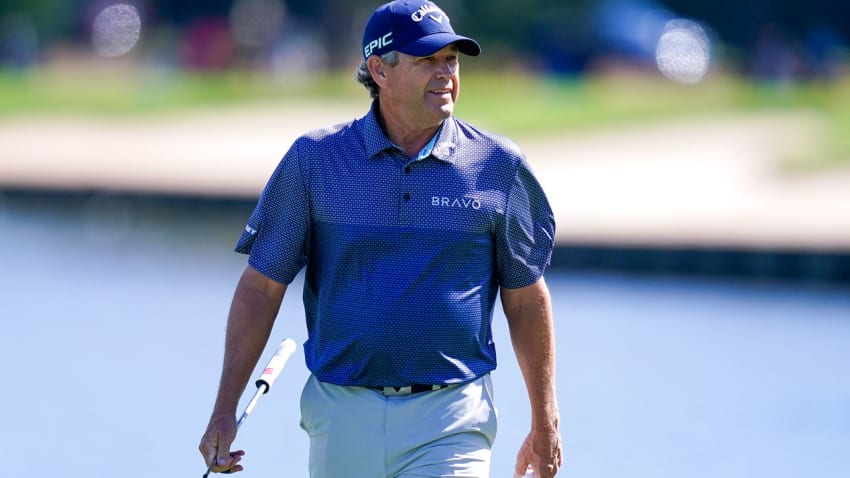 Lee Janzen birdied the first playoff hole to get his second senior win.

You have to feel a bit for the man they call “The Mechanic”.  First it was Super-Senior Phil Mickelson robbing Miguel-Angel Jimenez of a victory two weeks at at the Furyk and Friends bash up in Jacksonville.  On Sunday at the SAS, it was yet another over-50 guy picking Miguel’s pocket.

It’s been a while since anyone has heard from Lee Janzen on the Champions Tour and you’d figure a guy with a pair of U.S. Open titles on his resume would do pretty well against the old fellas.

On Sunday at Prestonwood Country Club in Cary, N.C., Janzen showed up with that old wedge and putter game that served him so well during his regular PGA Tour days.

Jimenez came up with a big birdie at the par five 17th to get to 12-under par, dashing the hopes of Jim Furyk (in at 11-under).  Janzen was three-under for the back nine, four-under for the day and 11-under overall when pulled his wedge approach into 18 a bit and found himself on the back fringe, about 16 feet from the hole.  He then hit one of those U.S. Open-winning Lee Janzen putts, it settled in the hole and put him in the house at 12-under.

Miguel seemingly had the answer when his approach to 18 left him with just nine feet for what could be a winning birdie.  He pulled it a bit, had too much steam on it and right through the break it went — tap in for 12-under and a date with Janzen for a playoff.

The playoff didn’t last long — just one more trip down 18.  Perfect drive by Janzen, pulled tee shot into the left fairway bunker for Jimenez.  Jimenez then went left with his approach, just in front of the grandstand at 18.  Janzen was in nearly the identical spot as he was minutes earlier, this time on the green and a bit closer — around 14 feet.  Jimenez hit a nice pitch to four or five feet but it wouldn’t matter as Janzen simply ran his in and birdied 18 for the second time — collecting only his second win on the Champions circuit.

“I’m trying to keep it together,” said Janzen, who was overjoyed to win again.  “I haven’t had a top 10 in I don’t know how long.  I survived the bad shots (during final 18) and made the good ones count.”

This was the final regular season event for the Champions Tour.

The Charles Schwab Cup playoffs begins next week in Richmond, where Phil Mickelson, sorry fellas, is the defending champ at the Dominion Energy Classic.