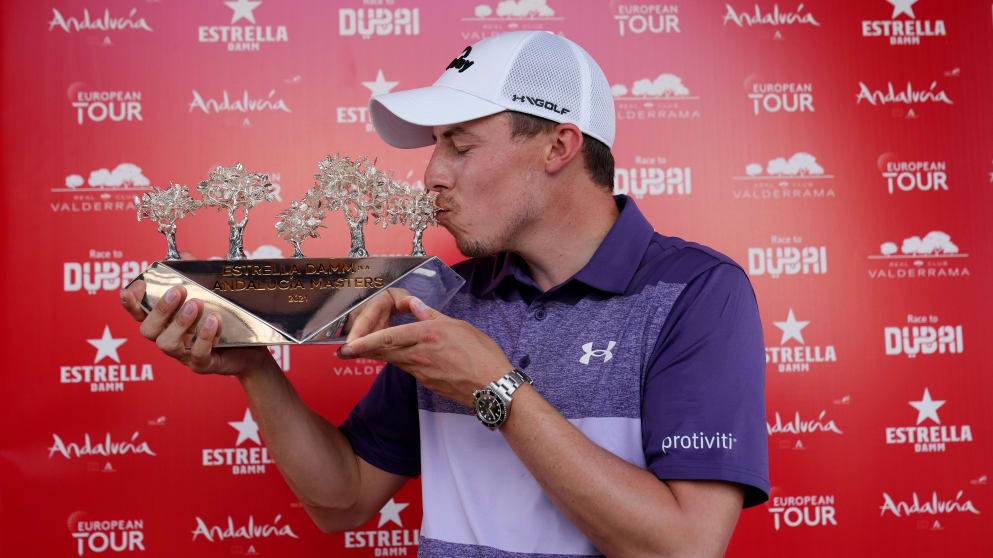 Matt Fitzpatrick was the perfect man to dominate the final round of the Andalucia Masters.

While others were falling victim to vicious Valderrama, Fitzpatrick put on a patience and ball-striking clinic Sunday and came away with his seventh European Tour victory.

Fitzpatrick and other would-be contenders were chasing Sweden’s Sebastian Solderholm.  Indeed, it was Solderholm who had the dream start on the final day, going three-under par over the first four holes thanks to a par-birdie-birdie-eagle sequence.

But things fell apart for the Swede.  After a par at 16, he hit a wayward tee shot at the par five 17th and was forced to play a provisional.  The first was unplayable and he played his third shot from 225 yards out.  He left it on the front fringe, 60 feet from the cup and proceeded to three-putt for double-bogey seven.  He fell back to four-under then added another bogey at 18 and completed a finishing collapse that opening the door wide for Fitzpatrick.

Fitz walked right through it.  The 27-year-old Brit, in his first outing since the Ryder Cup, stuck his approach at 16 from 121 yards to 10 feet and ran in his birdie putt to get to five-under.  At 17, he went for the green in two and was just long.  His third stopped seven feet away and he’d hole that one for his second birdie of the day after putting 15 straight pars on his scorecard.  A routine par at 18 and he hoisted the trophy.

It was a complete exercise in patience for the 27-year-old who had rounds of 71-68-70-69 for the week on one of Europe’s most challenging layouts.

“It’s on the bucket list to win round Valderrama with the history that it has,” Fitzpatrick said after he walked triumphantly off the 18th green.  “To do it bogey-free on Sunday as well is extra special. I’m delighted.  It’s amazing, particularly the way I did It – very patient all day, didn’t try to press anything, stuck to our targets and managed to hole the putts at the end.  I’m delighted with the win.”

Fitzpatrick kept his ball out of trouble all day and there’s a lot of it at Valderrama.  “You can hit half decent shots and be behind a tree and you’re chipping out or you’ve got to maneuver something, it’s a true test and to be patient the whole 72 holes, I’m really pleased with the way my attitude was all week,” he added.

The oil-fat-and-rich Saudis have caused more than a few sleepless nights with the powers-that-be on the PGA Tour and European Tour and now they’ve taken their “team golf” concept to the women’s game, where their “sports-washing” is welcome with open arms.

They played the Aramco Team Seriers — New York at the Glen Oaks Club in Old Westbury (New York) and it was Team Jessica Korda that won, in the individual portion, it was Charley Hull from England shooting 12-under par to beat world No. 1 Nelly Korda for the individual title.

The team competition for the 54-hole event was settled in the dark, under the lights and Team Jessica ended up beating Team Sophia Popov (Sophia Popov gets her own team?).  Bogeys tied the first playoff hole (seriously?) then the Korda team prevailed with a two-putt bogey at the par three 17th (seriously?).

This was a Ladies European Tour event.  Aramco is the master oil company in Saudi Arabia.

The LPGA Tour heads to South Korea this week for the BMW Ladies International.

You may recall that Casey Martin played briefly on the PGA Tour, it was Martin who successfully sued the PGA Tour for the right to use a golf cart in competition.

The 49-year-old Martin has had issues with his right leg since birth, specifically dealing with a type of circulatory disorder called Klippel-Trenaunay-Weber Syndrome, which makes walking difficult — and eventually makes the threat of amputation a possibility.

After leaving the Tour, Martin has served head golf coach at the University of Oregon since 2006 and won an NCAA title in 2016 at Eugene Country Club.  The past two years his right leg has been in a cast after he fractured his right tibia in October 2019 after road construction outside of his home caused him to step wrong off a curb while bringing in his trash cans at night.

“I’ve lived with this fear all my life that if I break it, I’m probably going to lose it,” Martin said.  Despite treatment, though, Martin’s leg never healed properly.

Martin had the surgery, a three-and-a-half-hour procedure that amputated the leg just above the knee, on Friday afternoon at Mayo Clinic.