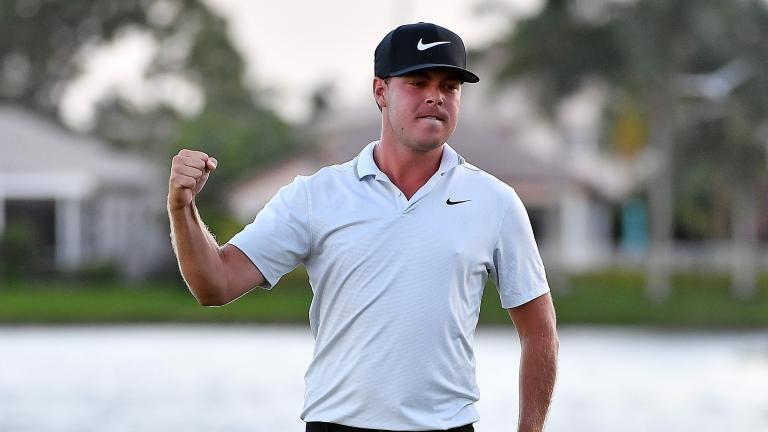 Keith Mitchell followed up his opening 62 with a second round 64.

Apparently there’s no limit to how low Keith Mitchell can go at the CJ Cup — he’s blistered the birdie-friendly Summit Club with rounds of 62-64 and stands a whopping 18-under par at the halfway mark.

“Seriously, I’m out there, even today I think I had a five-shot lead at one point and missed a green and it just felt like that again, because I was just holding myself to such high expectations. Some of them are probably a lot too high and that when you don’t live up to those, you beat yourself up,” said Mitchell, who goes into the weekend with a whopping five-shot lead over four players — including resurging Jordan Spieth.

Spieth, Harry Higgs, Adam Scott and Seonghyeon Kim from the Asian Tour are all in at 13-under after two rounds, looking at Mitchell’s rear end.

Rickie Fowler may have turned the corner as he shot 66-66 (12-under) and that make three 66s straight, counting his second round at last week’s Shriners.

But its hard to quantify the Summit Club, which appears to be way to easy for the bulk of this field, especially Mitchell.  Higgs summed it up best:  “You’re getting pretty irritated if you’re making pars out here.”

Still, a number of big names have been left behind.

World No. 2 Dustin Johnson is only four-under, leaving him a lowly T55 in this limited field of 78 players.  World No. 3 Collin Morikawa, a member at Summit Club, stands at seven-under along with boasting Brooks Koepka.  Louie Oosthuizen, another top 10 player in the field, is only three-under par.  Xander Schauffele is six-under and defending champion Jason Kokrak is a whopping 17 shots behind Mitchell at one-under par.

First round leader Robert Streb, who opened with a dazzling 61 on Thursday, fell back to earth with an even-par round of 72 on Friday.