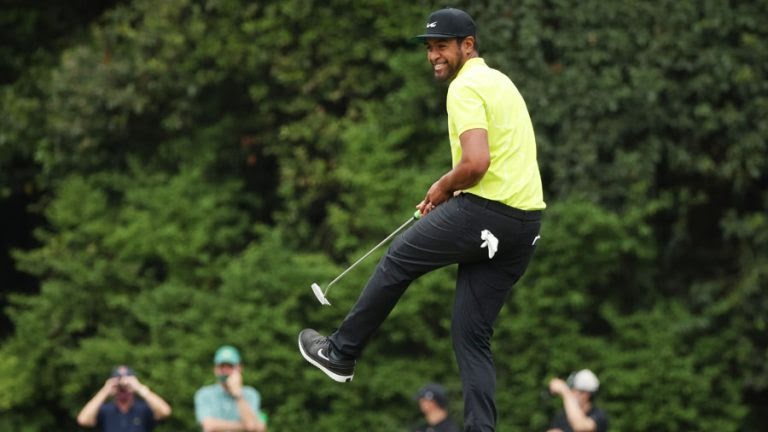 A key change made all the difference on the greens for Tony Finau.

It was common knowledge for most of his PGA Tour career that putting was the Achilles Heel for ultra-talented Tony Finau.

Finau has been a superior ball-striker since early in his career.  He won the Puerto Rico Open in March of 2016 — not exactly a signature win on anyone’s resume.

The harsh truth was that Finau was underachieving as the 2017 season passed without a win, then 2018, another winless year in 2019 and he was skunked again in 2020.

Something was amiss for sure — too much talent to go winless for that length of time.

Let’s go back in time to 2018 when Tony signed a multi-year deal with PING.  Part of its deal with its staffers is they are required to use one of the company’s putters.  You may or may not remember that PING’s first product was a putter and it built its reputation through the years with its significant putter designs.

Finau was the exception in 2018.  When PING started it’s romance with Tony in 2017, he was using a Piretti-brand putter and he told the PING reps up front that he didn’t want to change the flatstick.  PING signed Tony anyway, confident he’d find a PING putter he’d like at some point during his contract time.

PING’s senior designer — Tony Serrano — kept working on a model to attract Finau.  In the meantime, Finau was hardly setting things on fire with his putting and it became common knowledge in the golf world that Tony was basically a crappy putter — why else had he gone winless since the ’16 Puerto Rico Open?

Finally, Serrano got a putter into Finau’s hands prior to the 2021 3M.  It was an Anser 2-D.  Tony had a pretty good outing at the 3M, he was starting to make more putts.

One month later, in the first playoff event, the Northern Trust, Finau made some clutch putts down the stretch that Sunday and the trophy was his.  His five-year winless streak came to a glorious end — a FedEx Cup playoff win is light-years ahead of a Puerto Rico Open.

The putter testing for Finau had only begun.  Prior to this week’s winner’s only Tournament of Champions, Tony was back at the PING testing facility.  He had a new grip with his foundation’s logo on it and Tony asked that a new putter be built for him.

“Tony is really particular about his putter, and that one’s been working for him,” Serrano said. “He didn’t want to change any variables. So we built him an identical putter for him to test that had the new grip.”

When Finau arrived in Phoenix, he headed straight for Karsten’s indoor putting lab to make sure his putting numbers matched.  Then it was on to the outdoor practice green to re-check what transpired indoors.

“We probably spent about two hours working on the putter,” Serrano said. “When we went outdoors, he was working on everything — long putts, short putts, breaking putts. It was important for him to know the new putter was doing everything the same.”

But something wasn’t right.  Tony didn’t like the sound the putter made as the ball came off the face.

“Tony told me he heard something different at impact,” Serrano recounted. “The lofts were the same, but something still didn’t match up to his ear. After some discussions with Tony, I reduced the loft on the putter from 4 degrees to 2.5 degrees. Tony wasn’t sure if the sound was good or bad initially — it was just different. Everything looked good initially, but once we reduced the loft, it was more consistent with the way it was rolling. It sounded better to him, too.”

Pay attention to that loft number — 2.5 degrees.  The old Piretti Finau used during his winless streak had five degrees of face loft.

Along with that loft change,  Serrano made a minor modification to the new PLD head, milling a line in the recessed area of the topline.  That’s not the usual spot for an alignment aid but putting it on Tony’s putter made it easier for him to ensure his hands and eyes were in a good address position.

Tony brought two putters to Kapalua.  The one he used to win the Northern Trust and a new proto-type, designed specifically for him.

Tony got off to a so-so start Thursday with a three-under par round of 70 but it was his ball-striking that let him down.  His putting?  It helped him rally with four back-nine birdies.

The flatstick was a game-changer for Finau.