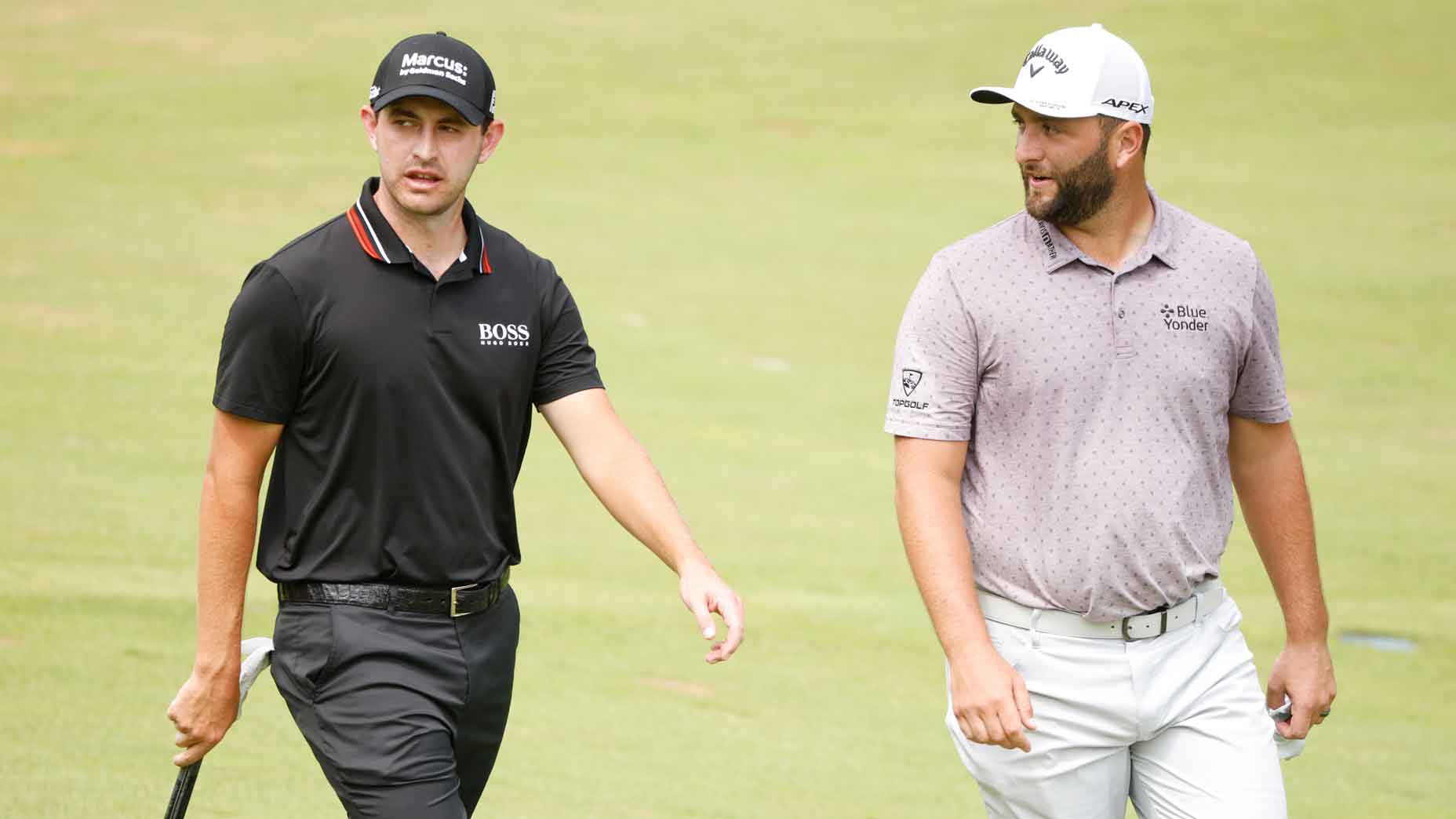 Patrick Cantlay and Jon Rahm got off to a good start with 66s on Thursday.

If you add up the number of days Jon Rahm and Patrick Cantlay took off after the Ryder Cup, it would be something in the neighborhood of 183 days.

But their time off from professional golf didn’t show on opening day at the Tournament of Champions on Thursday at birdie-friendly Kapalua.

Rahm, the U.S. Open champion (and world’s No. 1) and Cantlay, the FedEx Cup king, didn’t start fast but finished with a flurry and shot seven-under par 66s that put them just a shot behind first round leader Cameron Smith.

Smith, likewise, took time off back at his home in Australia.  “Didn’t know what to expect, I didn’t play much at home,” said Smith, who eagled the par five 15th and added three more birdies on the back nine.  He failed to birdie the gettable par five 18th but still signed for 65 on the par 73 layout.

Cantlay, who hadn’t played since the Ryder Cup, started slow.  He was only one-under through 12 holes and at Kapalua, par is not your friend.  The scores were low, two weeks of rain brought out the “life-clean-and-place” rule and Cantlay heated up starting at 13 and went birdie-birdie-eagle-birdie-birdie.  Like Smith, he failed to birdie the 18th but still was impressive coming home.

“I still think I’m a little rusty and I saw that in my start,” said Cantlay, who missed the first green and saw his chip run 12 feet past the hole.  “I got away with a couple of loose swings and one flier on the sixth hole where I was able to make a par, but maybe shouldn’t have.”  His approach to the par four flew 40 yards over the green but he pulled off a nice shot from a heavy lie and holed an eight-footer for par.

“And then really got on a roll on the back nine,” Cantlay said in somewhat of an understatement.

Unlike Cantlay and Smith, Rahm hit the 18th in two and two-putted from just outside 90 feet for a closing birdie to get to seven-under.

“You can always expect a little bit of rust,” said Rahm, who hasn’t competed in 83 days.  “I took time off, but I wasn’t on the couch doing nothing. I was still working out. I was still practicing as if I was still in the season. I took maybe three weeks off of golf, which were very needed. But even though I was home, I was practicing.  Again, not that I’m surprised that I played good, but it’s really good to come out and start the year off the right way.”

Ryder Cupper Daniel Berger was in the group with Rahm and Cantlay and played well despite the fact that his clubs showed up late.

Kevin Na, who won the QBE Shootout with Marc Leishman late last year, started bogey-bogey but played eight-under over his final 16 holes — doing what Na does, walking in putts — a lot of them.

World No. 2 Collin Morikawa’s 68 left him three shots back of Smith along with Brooks Koepka, Garrick Higgo, Joel Dahmen and FedEx points leader Taylor (the) Gooch.

Thirty-four of the 38 players shot under par.  The list of under-achievers was a short one.  Defending champion Harris English, who shot 25-under to win last year, opened with an even par 73.  Justin Thomas was one-over (74) and apparently Patrick Reed is still getting used to his new clubs.  He was tied for last with J.T.

Stricker, in an interview with Wisconsin Golf, revealed a problem that started off as a bad cough and sore throat in mid-October then progressed into something “far worse.” After a COVID-19 test came back negative on Oct. 23, Stricker was prescribed an antibiotic by his doctor and began to feel better a couple weeks later. However, Stricker began to feel ill again after a hunting trip and was admitted into the UW Health University Hospital per the Wisconsin Golf publication’s story.

“I came home from hunting one night and I was like, ‘I don’t feel good. My side hurts. I just don’t feel right,’” Stricker recounted in the interview.  “That night I had the sweats and all of a sudden, my temperature was 103. I went back to my primary and got amoxicillin, a heavier antibiotic. And I think I had a reaction to that. My throat started to close up, my lips got puffy, my glands got puffy, my tongue got puffy. It was like an allergic reaction. I was still having these 103-degree temps.

“So, I went into the hospital about two weeks before Thanksgiving and they kept me in there.  That’s when the shit hit the fan.  My liver numbers started getting worse.  My white blood cell count was jacked up really high.  I was fighting something, but they couldn’t find out what it was.  My liver was going downhill. I got jaundice. I was yellow and peeing out Pepsi-colored pee.”

Even scarier, Stricker recounted that his heart rate jumped out of rhythm; at one juncture his heart rate soared to 160 beats per minute and stayed there for two hours. He was released from the hospital the day the day before Thanksgiving but found himself back in three days later.

“A couple of times I was like, ‘What is going on?’” Stricker remembered.  “Everything is going the wrong way.  It wasn’t fun.  You don’t know what’s happening.  You don’t know where this road is leading to.  I never thought that I’m not getting out of there kind of thing.  But I didn’t eat for two weeks.  I didn’t have any energy or appetite to eat.  I had a hard time just getting up and walking because of the heart.  I took a few steps to the bathroom in my room and I’d be out of breath.  I was pretty sick, from what they tell me.”

The genesis of the illness is a mystery for Stricker.  “It’s a letdown, right, after that happens? (Ryder Cup victory) And then your immune system is probably down,” Stricker explained.  “It probably played a role in it somehow.”

Things are still testy for Stricks.  He’s on a no-activity order and can only walk short distances.  He’s dropped more than 25 pounds and added that his cardiologist advised him it would be six months before he could return to competitive golf.

Stricker has an invite to the Players Championship in March after winning the Senior Players in 2021 and his goal is to make it to Ponte Vedra.

Parsons Extreme Golf has some LPGA players on its staff and a few lesser name PGA Tour guys but now they have the controversial Patrick Reed on board.

As the 2022 season gets going, Reed showed up at the Tournament Of Championship with the PXG stuff in his bag and a PXG cap.  He’s the headliner.  Jason Kokrak, Zach Johnson and Joel Dahmen are also PXG guys.

Reed has been an equipment free agent most of his career.

In 2021 he used a Titleist driver, TaylorMade three-wood, a Callaway hybrid and his own custom irons from Grindworks.

All that stuff is out, Parsons is in, which no doubt makes Bob “Kaboom-Baby!” Parsons a happy man.