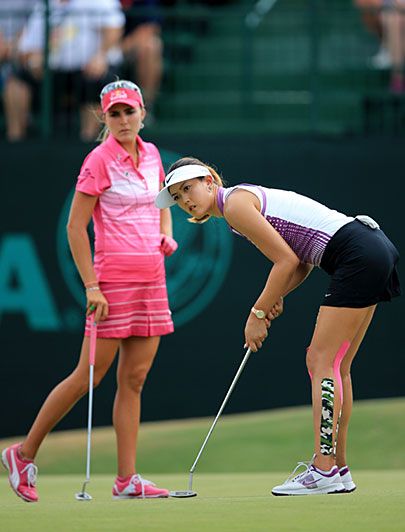 Neither Michelle Wie or Lexi Thompson are in Phoenix this week.

Founders Cup Goes On Without America’s Most Popular Players

Michelle Wie re-injured her wrist a few weeks back.

Lexi Thompson, well, Lexi likes to take it easy, she doesn’t play a crowded schedule and as a result that means America’s two most popular players are not in Phoenix this week.

The show went on without them Thursday at the Founders Cup, as the LPGA finally returned to U.S. soil.

Alana Uriell immediately shook things up by shooting a flawless, seven-under par 65 that earned the former University of Arkansas a share of the lead.  If you don’t recognize her name you’re not alone.  She’s a totally untested rookie who notched a win in her pro debut two weeks ago on the Symetra Tour, capturing the SKYiGOLF Championship.

Uriell was obviously inspired by that victory.  She credited her iron play for her opening 65.  “I was confident with my iron play and as a result, hit it close and made some putts,” said Ariell, who lost her mother to cancer when she was just 14 years old.

She’s right up there with a crowd including Na Yeon Choi, Jin Young Ko, Charlotte Thomas and Celine Boutier.