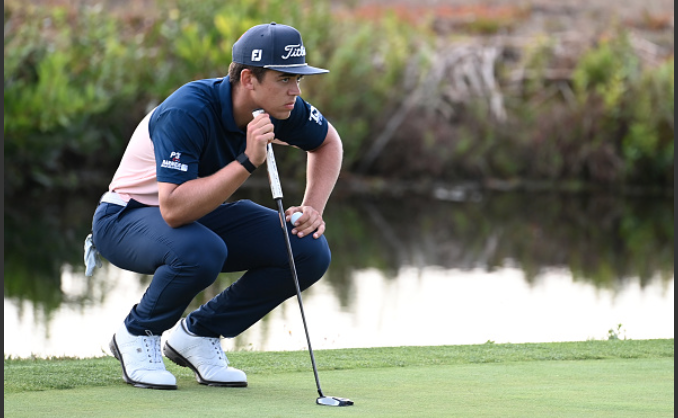 South African lefty Garrick Higgo is trying to go back-to-back as the European Tour remains in the Canary Islands off the coast of Spain.

Higgo opened with with an eight-under par 63 on Thursday at the Tenerife Open, bringing momentum from his victory last week where he went 25-under to win the Gran Canaria Lopesan Open.

Higgo, who is only 21-years-old, had seven birdies and an eagle on day one and went out in the afternoon wave on Friday.

Thorbjorn Olesen set the first round pace.  He was a shot better than Higgo with a nine-under par 62.  Olesen is still awaiting his hearing on charges stemming from his behavior on a flight from Nashville to London in 2019.  That hearing has been pandemic-delayed and he was recently reinstated by the European Tour and is making the most of his return.

“To be honest my expectations for this week are low as well,” Olesen said. “I was very happy to finish top five (last week), that was amazing. I haven’t been that high on a leaderboard for a very long time; being in contention again was a great feeling and something I’ve missed very much for the last few years.”

American John Catlin had the 59-watch going on day one.  He was nine-under through his first 12 holes but cooled off over the final six and ended up tied with Higgo, shooting 63.

Higgo, Catline and Olesen had catching up to do on Friday as they went off in the afternoon wave, in pursuit of the early leader in the clubhouse — Germany’s Nicolai Von Dellinghausen.  The 25-year-old opened with a 64 on Thursday and went even lower on day two, shooting a stunning nine-under par 62.

Inbee Park Tied At The Top In Singapore:

Inbee Park’s resurgence on the LPGA Tour is continuing in Singapore.  She’s tied for the 36-hole lead with fellow South Korean Hee Young Park as both have set a fast pace at 11-under par at the HSBC Women’s World Championship.

Park got off to a slow start in her second round, she was one-over through her first four holes but rallied to shoot 69.  She’s looking for her second victory of the season after taking the Kia Classic in California.

The heat and humidity indexes were high with some light rain falling on Friday at the Sentosa Golf Club’s Tanjong course and Park has good memories from her previous play in Singapore.

“It definitely reminded me of some good memories when I was playing good out there today, just if I can raise this trophy again this time, I definitely thought about it. The good memories definitely make me concentrate even harder,” said Park.

Park has her husband on the bag this week.  Her regular caddie, Brad Beecher from Australia, was not able to work for her this week because of Singapore’s COVID quarantine restrictions. But Park was happy with her hubby’s work.  “I think I’m going to give him 10 (out of 10) and probably 10 for the rest of the week because I’m really thankful that he’s doing this for me and in this heat,” Park said. “I’m just really thankful that he’s carrying the bag.”