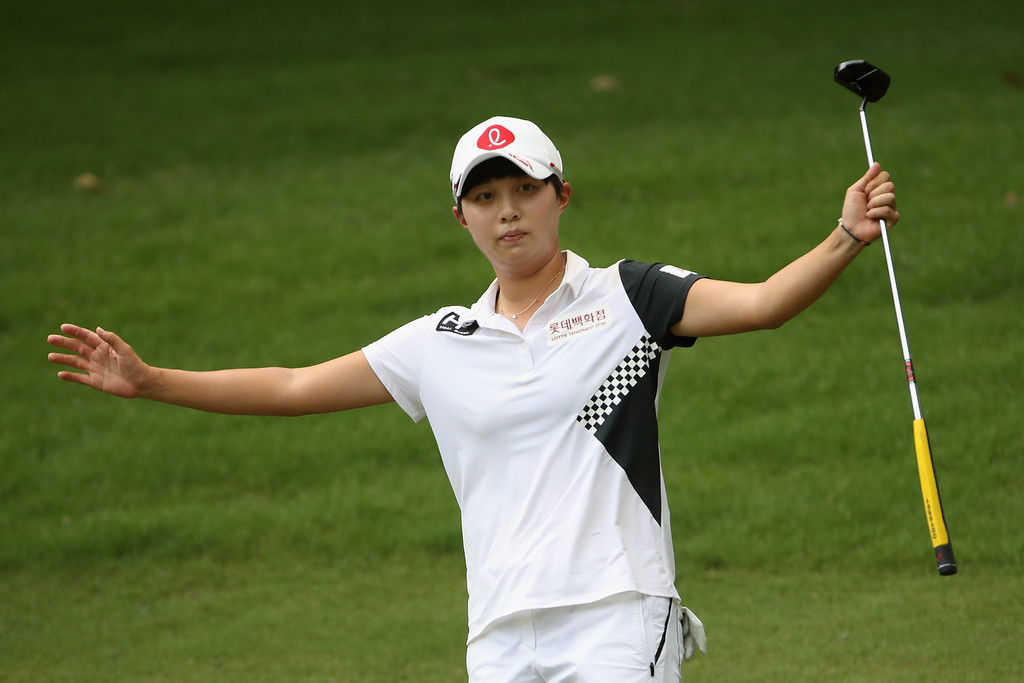 Hannah Green found herself chasing Hyo Joo Kim late Sunday at the HSBC Women’s Championship in Singapore.  Down by two shots, Green holed her approach at the par four 14th for an eagle two then added another birdie at the 16th, taking a one-shot lead into the final two holes.

With Kim watching in the clubhouse, Green found a way to lose — she simply three-putted 17th, missed the green at 18 hit a very poor first putt from the fringe then missed the par putt to hand the championship to Kim, who won for the first time on the LPGA Tour since 2016.

Kim finished strong with an eight-under par 64 that put her in at 17-under par.  Green got it to 18-under then her putter left the country for the final two holes.

Green’s 69 left her in solo second at 16-under par.  Three players were tied for third – Patty Tavatanakit shot 65 and third-round leader Lin Xiyu and world No. 2 Inbee Park had 70s to finish two strokes behind.

“Winning after such a long time, it feels like my first win of all,” Kim said. “I thought everybody had the opportunity to win. I didn’t make any mistakes on the front nine, and as I went to the back nine, I felt I might be able to win it.”

Kim did not play on the LPGA Tour in 2020.  She stayed home in South Korea to play on the KLPGA tour. She played in 14 events and had two wins and six other top-10 finishes.

As for Green, perhaps she was surprised by her sudden lead through 16.  “I didn’t really feel like I was in it until I holed the shot on 14. That was a nice way to get my momentum. Made a really good putt on 16 to make birdie, but obviously pretty disappointed to have two three-putts finishing. Felt a little nerves on the last, which is nice, because I guess having the spectators out there it kind of meant something to me,” said Green, who ultimately finished in solo second at -16. “So I’m obviously very close, so I just hope that I can continue this momentum and who knows, have a good result next week.”

The LPGA Tour heads to Thailand for this week’s Honda Championship.

Burmester Runs Away With Tenerife Open With Closing 62:

South African golfers are on a roll in European Tour action.  Going into the Tenerife Open in Spain, South Africans had taken three of the last six events.

On Sunday, Dean Burmester made it four out of the last seven.

Burmester got his second career victory on the Tour with an incredible nine-birdie performance over the final 18 holes that made it a runaway win.  He finished 25-under par, five better than Germany’s Nicolai Von Dellinghausen, whose 68 earned him solo second.

“I think any time you can make your game travel, you’re achieving great things, so I’m ecstatic to win here,” Burmester said after the win.  “I’d obviously love to get in that top 100 in the world, it’s quite lucrative, a lot of things happen when you get into that top 100 so if I can get back there I’ll be very excited.  Hopefully I can go from strength to strength now and that’ll be my plan, I won’t stop working hard and trying to get better.”

As for the South African winning stretch, he added:  “It’s amazing, just to have the support of our little group of South African guys, we’re kind of like a family out here. We all travel a long way to come and ply our craft so just to have those guys on the 18th green, all the caddies, all the players, spraying me with champagne and congratulating me – there’s no better feeling in the world.”