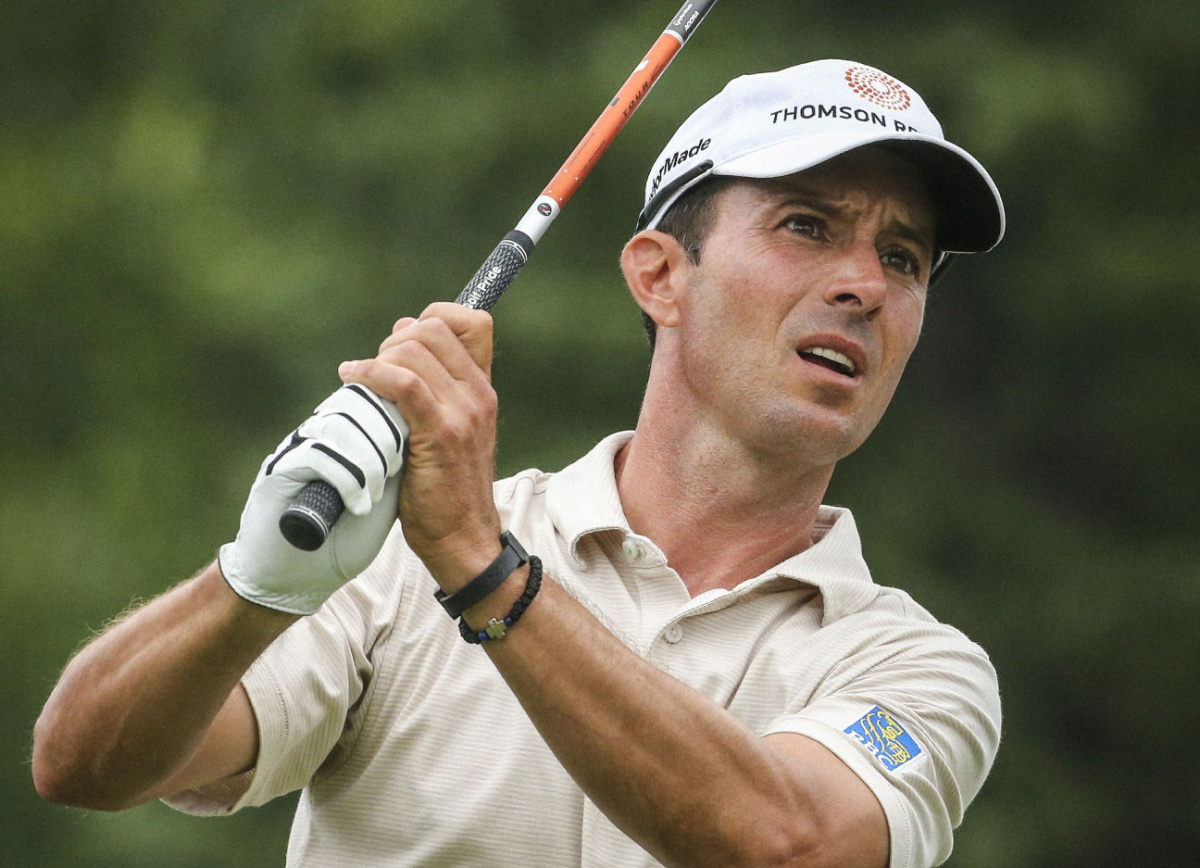 Mike Weir was overdue for a senior victory and his 14-event wait ended late Sunday afternoon at the Insperity Invitational.

The rain-shortened Champions Tour event came down to the wire at the Woodlands as Weir was tied with John Daly with two holes to play.  Both were at 10-under par and Daly had a chance to post 11-under after a perfect drive at the 442-yard par four closing hole.  But with only 145-yards to the hole, Daly under-clubbed and his approach came up short, in the water fronting the green.

It cost Daly a double-bogey and he fell back to eight-under, opening the door for Weir’s first win on the over-50 circuit.

Weir responded with a perfect drive and a nine-iron approach to easy two-putt range.  He made his par and with rounds of 66-68, made it to the winner’s circle.

“J.D. played great. It was unfortunate for him on the last,” Weir said. “This means a lot. I played really well today. I’m still a little off with my putting. I made it hard on myself. But I hit the shots that I needed. It feels very good.”

Friday’s opening round was washed out by heavy rains and the first round wasn’t finished until Sunday morning and the tournament was reduced to 36 holes. Then turned it into a shootout, and Daly and Weir provided most of the action.

Daly holed a 25-foot eagle putt on the par-five 13th to take a two-shot lead, and it looked as though he was on his way. In the group behind him, Weir hit his approach to three feet on the 13th for a matching eagle to tie for the lead again.

The former Masters champion fell back with a bogey on the 14th, but he caught a break when Daly missed his three-wood into the par-five 15th and had to settle for par and Weir made birdie to catch him again.

Daly couldn’t believe he hit into the water on the final hole.

“I caught a gust on 18,” he said. “I hit a nine-iron from 141 there and I caught a gust and just got a bad break. But I can’t hit the ball any better. I’m excited about next week,” Daly said, looking forward to the first senior major of the season — the Regions Tradition.

Tim Petrovic, playing in the last group with Weir, had a nine-footer for solo second but missed and he finished in a three-way tie for runner-up with Daly and David Toms as all three finished at eight-under par.

It’s not how you start, it’s how you finish and Paul Barjon found that out Sunday on his way to winning the Huntsville Championship on the Korn Ferry Tour.

The Frenchman got his first victory at The Ledges course, in a three-man playoff and his eagle on the third overtime hole earned him that inaugural victory.

Things didn’t start well for him — he made double-bogey on the first hole of the day.  He started with a three-shot lead but found himself four back at the turn.

He fought his way back and shot 69 to get to 15-under, tied with Mito Pereira (66) and Bill Kennerly, who closed with an amazing 63.  Pereira had a chance to win in regulation but missed an eight-footer for birdie on the 72nd hole.

Kennerly had the same opportunity on the first playoff hole but missed a short birdie putt.

Barjon ended it on the third playoff hole when he stiffed his second from 210 yards out and holed his eagle putt.

“It was definitely one of the best shots. I’ve hit some gimme birdies this week that were pretty nice, but at this time of the day to hit a 210-yard shot to 10 feet is definitely amazing,” Barjon said. “It’s been a close call the last two years. You have to get a little lucky. If you catch a bad break — if Billy (Kennerly) makes his first putt on the playoff hole, it’s over. It tilted my way there, and I made it happen.”