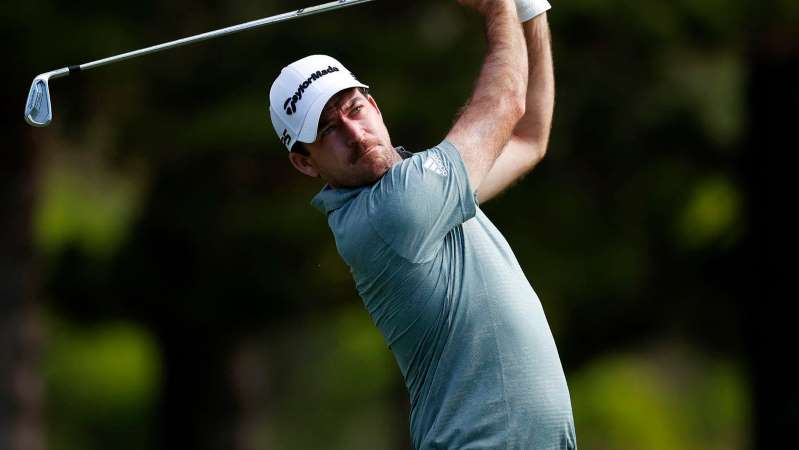 Nick Taylor finished birdie-birdie to get to 12-under par at Waialae.

Halfway home at the Sony Open and two-time winner Nick Taylor leads the way at the relaxed Sony Open.

Taylor finished birdie-birdie on Friday and got a nice break when he hit a wayward drive on the par five ninth hole that was stopped by the net that keeps balls out of the driving range.  His ball ended up close to the bottom of the net.  Taylor was given relief and took advantage of a good break to birdie the ninth, his final hole of the day.  His great finish added up to a 62 added to his opening 66, he’s 12-under and two clear of second place.

“It was a fortunate break,” Taylor said of his good fortune at the ninth. “Easily could have probably gone under the fence, but to bounce off and get a drop was a break and it was nice to take advantage of it.”

But Nick has plenty of competition chasing him.  Here’s how the top contenders stack up behind him:

Vaughn Taylor (64-66):  A player who often plays better early in the season.

Collin Morikawa (66-65):  At home in Hawaii, has family connections.  Look out for this guy over the weekend, his game is trending up.

Marc Leishman (66-65):  Good iron player, should handle any winds that come up over the final two days.

Joaquin Niemann (62-69):  Three-putted the final hole (the ninth) for par otherwise would have been a shot closer to Taylor.  Still should be there come Sunday.

Hideki Matsuyama (66-65):  Might be finally getting used to that new backswing that doesn’t have the long pause at the top.

That’s a good field lined up behind Taylor.  Surprise contender after two rounds is 50-year-old  K.J. Choi.  Choi has rounds 67-65 and he’s tied for 15th.  He’s low senior in the event but there are others who survived the cut including Jim Furyk (69-66), Jerry Kelly (68-68) and Mike Weir (68-66).  They got in the field and are warming up for the first Champions Tour event of the season next week at Hualalai for the Mitsubishi.