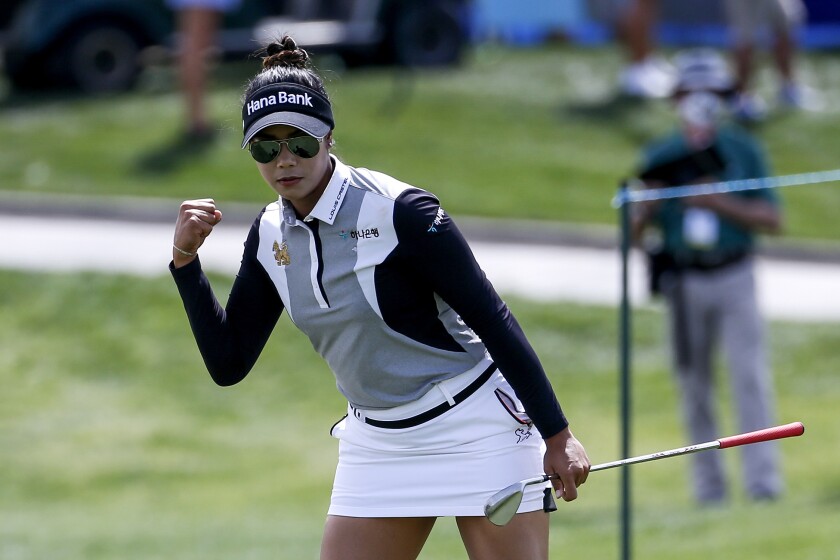 Patty Tavatanakit won her first major at the ANA Inspiration this year.

To the surprise of absolutely no one — Patty Tavatanakit is the LPGA Tour’s Rookie  Of The Year.

All the former UCLA star did was win a major — the ANA — and she took home the Rolex Annika Major Award — the one that goes to the player who performs the best overall in the five women’s major championships. Patty edged out Nelly Korda for that one by just two points.

Patty’s already a rising star.  She has length off the tee and adds an incredible short game to her accurate iron shots.  She’s currently fourth in the Race To The CME and she’s seventh in money earnings this year with a nifty $1,322,827 to her credit.  She’s third in the Rolex Player Of The Year standings behind Jin Young Ko and Korda.  The way Ko is playing, she’s on the verge of walking away with that title.

“Earning this award is a dream come true for me,” Tavatanakit said of winning Rookie of the Year honors. “It’s once in a lifetime. I’m so thrilled that I get to add my name to a spectacular list of recipients that I have looked up to for many years. This season has been one to remember, and I’m excited to finish 2021 strong as the Tour’s newest Rookie of the Year.”

Tavatanakit is the second player from Thailand to win Rookie Of The Year.  Moriya Jutanugarn won it in 2013.

This has been in the works — proposals to modernize and simply the rules for amateur status were made last February.  The changes were officially published this week by both the USGA and the R&A.

Many of the old restrictions have been removed and the new rules go into effect on Jan 1.

“Golf is unique in its broad appeal to both recreational and competitive players,” said Craig Winter, USGA senior director, Rules of Golf and Amateur Status. “This was emphasized in the feedback we received earlier this year and we believe these updates will help simplify these rules and ensure the long-term health of the amateur game, not only to those who compete at the highest level of amateur golf, but for the millions of golfers at every age and skill level who enjoy competitive events at their home courses.”

The modernized amateur rules most importantly eliminate all advertising, expense-related and sponsorship restrictions, a move that will clear hurdles for amateur players and make the game more affordable to play at a high level. The simplistic approach also makes it easier for the new rules to be understood.

Here are the NO-NOs for amateurs under the revisions:

• Play as a professional.

• Accept payment for giving instruction (although all current exceptions still apply, such as coaching at educational institutions and assisting with approved programs).

Amateurs, can however, receive money for providing instruction on digital platforms (social media) provided it’s “one-way” meaning not giving a “one-on-one” lesson to an actual person.

Over the past year, dozens of states across the country have passed – or are working on passing – legislation regarding name, image and likeness for college athletes. The NCAA in June adopted a temporary policy that waives most of its NIL-related restrictions, essentially leaving those rules to the states, many of which have already put their NIL laws in place, and individual schools until blanket federal legislation is established. The USGA did the same for college players in July while it worked on its new amateur rules.