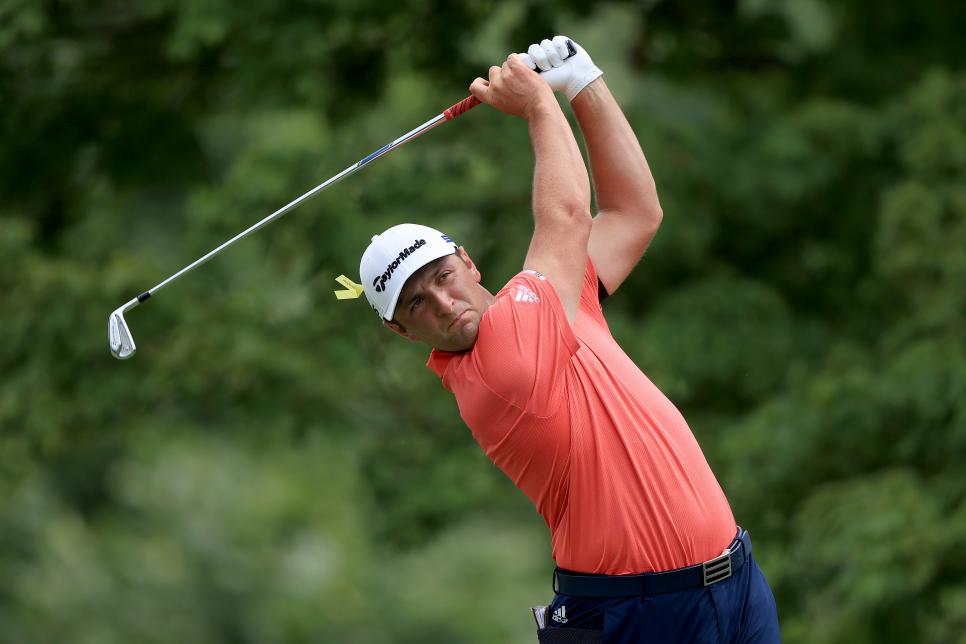 Jon Rahm is the first Spanish player since Seve to rise to world's No. 1.

Jon Rahm Survives Memorial Mayhem, Wins And Moves To No. 1

Jon Rahm survived a day of pure mayhem Sunday and became the world’s No. 1 player despite a series of back nine disasters at The Memorial.

The 25-year-old Rahm became the first Spanish golfer since Seve Ballesteros to claim the top spot in the golf world.  He won Jack Nicklaus’ Memorial Tournament but not in a manner he might have envisioned.

Rahm started the afternoon at Muirfield Village with a four shot lead over Ryan Palmer and the course playing as difficult as a U.S. Open setup.  Rahm parred his first four holes and was in the fairway at the par five fifth when inclement weather halted play.  After nearly an hour, played resumed and Rahm immediately birdied the fifth.  That increased his lead over Palmer to five shots and Rahm was looking quite comfortable.

He stretched that advantage to a whopping eight shots at the turn.  He shot two-under par on a course that was mangling the rest of the field.  His 34 got him to 14-under to Palmer’s six-under as Palmer’s 38 seemingly left him struggling for second.

“He understands what he has to do and he’s doing it — it’s fantastic,” said host Jack Nicklaus as he watched Rahm build what looked like an insurmountable lead.

But then the mayhem began.

Rahm missed the fairway at 10, was forced to lay up and made his first bogey of the day.  No worries, he still had a seven shot lead.  But at the 11th things got more serious when his tee shot sailed into the creek in the left rough.  Rahm slammed his driver on the tee then proceeded to make double-bogey seven.  The seven-shot lead was now down to five.

Palmer birdied the par three 12th and cut the lead to four shots.  He had carved four off Rahm’s lead in just three holes.

More mayhem arose at 14 where Rahm missed a five-footer for par and saw his lead shrink to just three with four holes to play — could it be Justin Thomas all over again?

Both Rahm and Palmer parred the 15th, a gettable par five and they headed for the par three 16th — toughest par three on the PGA Tour this year.

Palmer pulled his tee shot but it cleared the bunker, barely, leaving him just 12 feet on the fringe from the difficult far left pin placement.  Rahm’s shot sailed long, leaving him one very, very tough shot.  He was staring at losing yet another stroke from his lead, possibly two.

More mayhem, but good mayhem for Rahm.  From a tough lie, he grounded his club behind the ball, looked to his line, made his swing and watched the ball barely land on the green then head for the hole.  It went in a-la Tiger Woods back in 2012.  Rahm rejoiced with a huge fist pump then got a low-five from Palmer.  The birdie moved him to 11-under — four shots better than Palmer with two to play.

More mayhem.  The television cameras, on a close-up replay of Rahm’s shot, showed that his ball moved, just barely, when he grounded his club behind the ball in the thick grass.  It was played over and over on the CBS broadcast and cast an air of uncertainty over  Rahm’s amazing two — a shot Nicklaus called “fantastic.”

Rahm played 17 and 18 with a five-shot advantage over Palmer.  He was 11-under, one-over for the day.  Palmer was at six-under with a firm grasp on second.  Rahm finished par-par to Palmer’s bogey-par.  Seventy-three for Rahm, Seventy-four for Palmer.  Rahm finished at 11-under, Palmer six-under.  Or so it seemed.

CBS interviewer Amanda Balionis was the first to tell Rahm of the possible rules violation.  Rahm grew wide-eyed but realized it wouldn’t matter, given his five-shot victory margin.

“I did not see or feel anything,” Rahm said when informed that cameras showed the ball moved from its original position.  “If it did, it’s not going to take anything away from the shot.  It was exactly what I needed.  It was unbelievable for that to go in.”

Rahm was right, it wouldn’t take anything away from him but two shots and a nine-under winning total versus 11 and a closing 75 instead of 73.

He will still be the number one player in the world this week.  He still got a winner’s fist-bump from both Jack and Barbara Nicklaus.

“It might hit me in a couple of days or a couple of weeks,” Rahm said of his win and ascent to No. 1 in the Official World Golf Rankings.

What he will remember is that he came through the mayhem of The Memorial and that he’s followed in the footsteps of his idol, Seve Ballesteros, all the way from the No. 1 amateur in the world back in 2016 to the No. 1 professional in July of 2020.