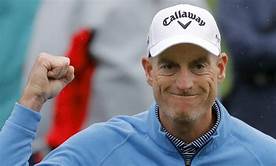 Jim Furyk had nine birdies at Pebble Beach on Friday.

Posted By: Tom Edringtonon: September 19, 2020In: In Other News...No Comments

The scenery was Pebble Beach beautiful and Jim Furyk had a fun day as he opened with and eight-under par 64 at the Pure Insurance Classic.

Pebble Beach is the setting for this pro-am style event on the Champions Tour and Furyk held a one-shot lead after day one of the 54-hole event.

Ernie Els, Cameron Beckman and Stephen Leaney were all in with 65s.  Dicky Pride and Doug Barron were two shots back of Furyk with 66s.

Perhaps Phil Mickelson should have saved himself the embarrassment of Winged Foot and showed up at Pebble, where he’s won six times.

Friday rains cleared some of the smoke from the air in Portland and Hannah Green found herself in a happy place and responded by taking a share of the first round lead at the Portland Classic.

Green held a one-stroke lead through 17 holes but made her only bogey of the day on No. 18, which played as the hardest hole in the opening round of the LPGA Tour event.

“I missed quite a lot of greens compared to my score, so the only putt I really missed was the one on the last, so to say that it pretty good,” said Green, who finished just as darkness was starting to set in. “That’s what I hope that I can continue. I know they’re a little bit bumpy this afternoon, so hopefully I can just keep rolling it well and they will actually drop.”

Playing in the morning wave, American Cydney Clanton made seven birdies and one bogey on her round, including a lights-out 5-under 31 on the back nine. Where Green bogeyed No. 18, Clanton was one of just 14 players to birdie the closing hole.

“I hit the ball really well, but I’ve been hitting the ball really well, and the putter was finally hot. I finally made some putts,” said Clanton, winner of the 2019 Dow Great Lakes Bay Invitational. “It’s also nice to hit some really close and had a par-5 in two have a two-putt. So it was really nice to see the ball starting to go in the hole.”

Friday’s rains finally brought fresh air to the Portland area. Play was suspended for nearly 1.5 hours due to lightning in the vicinity of Columbia Edgewater. Play was then suspended for darkness at 7:19 p.m. with 20 players still to finish their first rounds. The first round will resume Saturday at 7:15 a.m., concurrently with the start of the second round.