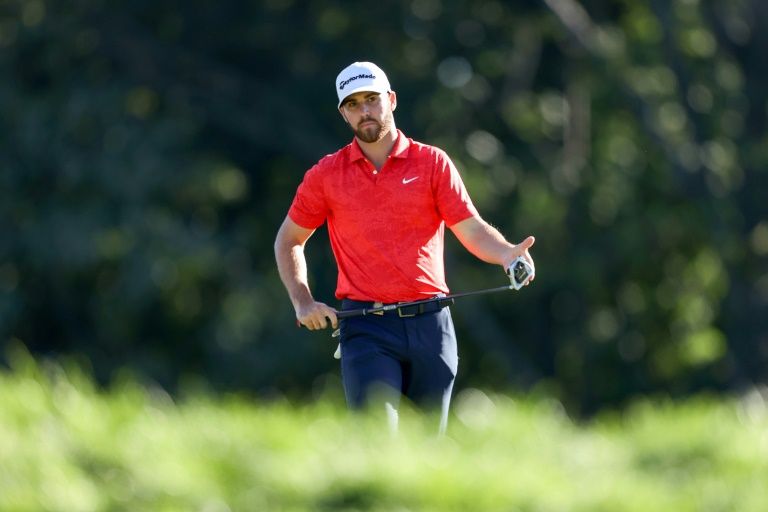 Matt Wolff holds the 54-hole lead thanks to a 65 on Saturday at Winged Foot.

The 120th U.S. Open could be an unorthodox Sunday showdown, pitting two of the non-tradition players in golf — 21-year-old Matt Wolff and 27-year-old Bryson DeChambeau.

Wolff rose to the top of the 36-hole survivors with a Saturday 65 that put him alone at five-under par, two better than DeChambeau.

After a shaky start that saw him bogey the first two holes at testy Winged Foot to start his third round, Bryson steadied himself and played his final 16 holes in two-under par.  Only a closing bogey at the 18th prevented him from shooting under par.

Only one other player is in red numbers through 54 holes and that’s Louie Oosthuizen, who is 10 years removed from his Open Championship win, his only career major.

Form in this championship says you need to be within four shots of the lead to have a chance at victory so here’s how the leaders are lined up:

Matt Wolff:  Matt hit just two fairways all day but that didn’t prevent him from putting six birdies and just a single bogey on his card.  He absolutely tore up the front nine, shooting a five-under par 30 then coming home in even par thanks to a 10-footer for birdie at the difficult 18th.  He and Justin Thomas are the only two players to shoot 65 at Winged Foot in a U.S. Open.

“I got pretty fortunate with my lies in the rough,” Wolff said after his round.  “I had good numbers (for second shots).  Hopefully I can hit more fairways tomorrow.  A good day all around.  I feel really god with my putting.  It’s a really hard course.  On Sunday?  Whatever happens, happens.”

Bryson DeChambeau:  It looked like he was heading for a bad round early.  He flat-out stubbed a putt on the first hole, three-putting for bogey the took another at the second.  He steadied himself and relied on his Crush It And Gouge It style of play.  He basically overpowered a lot of holes.  He birdied 16 and 17 to pull within a shot of Wolff but couldn’t make par from in front of the notorious 18th green.

Louie Oosthuizen:  The man they call “Shrek” is 10 years older than DeChambeau but his 68 was one of the day’s best rounds.  He’s a more fairways-and-greens traditional type of player who will need to be in red numbers Sunday and hope that both Wolff and DeChambeau stumble.

There are just three players in at even par through 54.  Each will need to shoot under par to have a chance.

Hideki Matsuyama:  Hideki finished even par.  He had a good round derailed with a bogey at 15 and a double at the 17th.

Xander Schauffele:  Three back nine bogeys prevented him from being right up there with DeChambeau.  Xander finished with an even par 70.

Harris English:  Started slow but recovered in time to shoot even par.

Rory McIlroy:  Rory’s 68 could have been even better  He’ll need no less than 65 on Sunday just to have a chance.

The biggest surprise of Saturday was the back nine collapse of overnight leader Patrick Reed.

Reed held the lead at the turn, shooting one-under on the front.  Then the roof caved in on him over the course of the final nine holes.  Six bogeys and a double offset by a single birdie added up to a shocking 43 for a 77 that knocked him out of contention.  He’s tied for 11th at three-over, eight behind Wolff.

What will happen on Sunday?  It’s a U.S. Open and it’s Winged Foot.

As Wolff said:  “What happens, happens.”