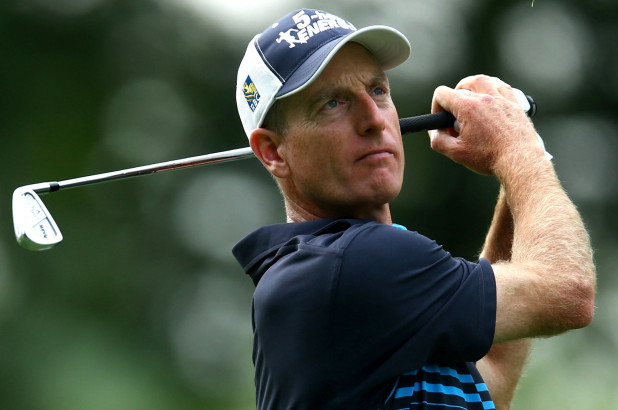 Jim Furyk came from behind and won by two shots at Warwick Hills.

Didn’t take Jim Furyk long to let the over-50 set know that he’s still got a lot of game.

Furyk, one of the steadiest players in the history of the PGA Tour, showed that steady game on Sunday at Warwick Hills with a four-birdie, no bogey performance that earned him the title at the Ally Challenge.

He finished 14-under par, closing with a 68 as the Champions Tour returned to action.  Furyk, who is still competitive on the regular tour, showed he is going to be a factor among the old guys.

He started the final round a shot behind overnight leader Brett Quigley.  Furyk birdied the 15th hole to get to 14-under.  Quigley birdied the par five 16th to tie Furyk but there was no drama over the final two holes as Quigley finished bogey-bogey to fall into a tie for second with Retief Goosen at 12-under.  Quigley shot 71, Goosen 66.

Furyk became the first player since Miguel Angel Jimenez in 2014 to win in his first start on the senior circuit.

He is the 19th player to win a Champions event on his first try, following in the footsteps of others like Arnold Palmer, Jack Nicklaus, Gary Player and Lanny Wadkins.

“I didn’t know 19 people won in their first time, it sounds so ordinary,” Furyk said through a smile after the victory. “It feels good, you know, I really missed a lot of good friends out here. I respect the talent out here and you look at how many Hall of Famers and how many good players there are, so it’s an honor to come out win the first one.”

His victory came at a familiar place. Warwick Hills was one of his favorite stops on the PGA Tour when it hosted the Buick Open until a decade ago. Furyk won there in 2003 and was a runner-up two other times.

It was his first victory since the 2015 RBC Heritage.

Richy Werenski took advantage of a flat back nine Sunday by overnight leader Troy Merritt and came through with 39 points to win the Barracuda Championship.

Werenski, who finished tied for third at the 3M, had a sensation back nine on the Tahoe Mountain Club where he scored 11 points, including an eagle at the par four 16th and a birdie at the closing hole that made the difference.  Werenski shot 30 for his final nine holes and his 66 gave him enough points to beat Merritt by a single point.

“I knew I needed a big day and then I started off with a bogey, which wasn’t good,” Werenski said. “Just wasn’t in a great rhythm early on in the round, but did a good job of just kind of snapping out of it, stopped trying on every shot, stick with my game plan and just try and make as many birdies as we could.”

The win validated his recent good play and gave him a springboard for the playoffs.

“It’s huge,” Werenski added. “I’ve been playing well for I feel like the last couple of months, but to get a win, I mean, that’s huge. I got a couple seconds and everything, so it just helps my confidence a lot. Now I know I’m good enough, and now we’re going to go make a good move for the FedExCup Playoffs.”

Fabian Gomez had the day’s best performance.  He shot 63 and scored 16 points and tied Matthias Schwab for third at plus-37 points.