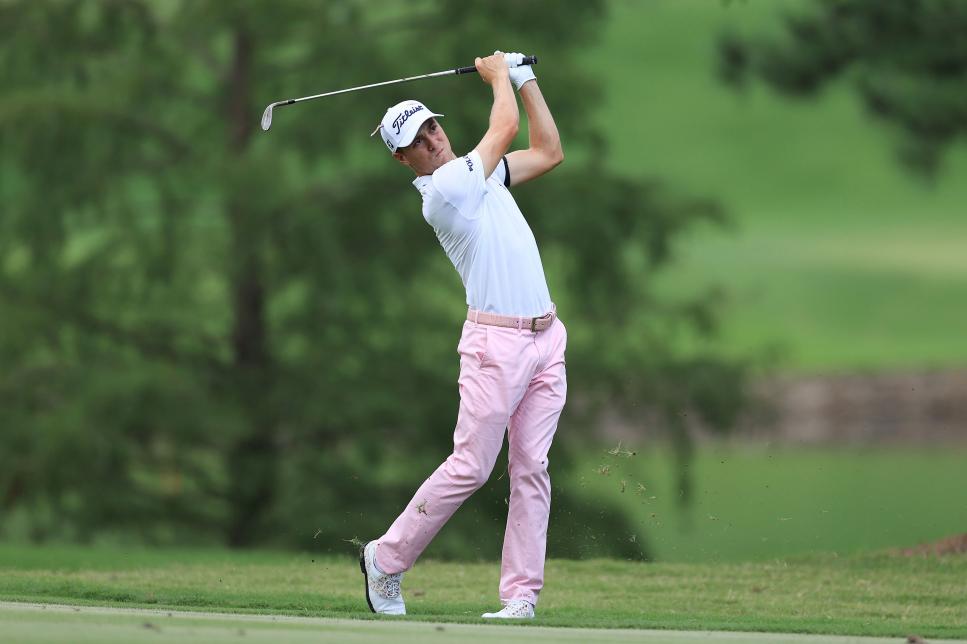 Justin Thomas got some breaks, took advantage and is now No. 1 again.

Justin Thomas needed a little luck down the stretch Sunday at the WGC-St. Jude and he got it.

“I got unbelievably lucky,” was how J.T. described what transpired on the final holes at TPC Southwind and that luck helped him notch his lucky 13th PGA Tour win and vaulted him back to No. 1 in the world rankings.

Thomas’ first big break came when he hit his tee shot too far left at the short 15th, fearing it would hit the trees, he screamed:  “Get lucky!”  And that’s exactly what happened.  His ball cleared all the trees, caught the cart path and bounced forward, settling just 45 yards from the hole in a fluffy lie.  He then created his own luck with a perfect pitch that left him an easy two-footer for birdie.

He needed it, Brooks Koepka was hot on his heels.

Thomas got more luck at the easy par five 16th, where his drive went way right.  He went for the green but caught a tree branch and his ball kicked into the first cut left of the fairway.  Then from 64 yards he hit another perfect pitch shot to three feet.  He made birdie, got to 13 and flipped the heat to Koepka.  Thomas made a nice par from the rough at 17 while Koepka slopped up the 16th,  taking  bogey and falling two back of Thomas.

Thomas finished with yet another wayward drive at the 18th — it sailed right but left him with a shot to the green.  He played to the right then made another perfect pitch to two feet to finish with 65 — 13-under for the championship.

Koepka bounced back with a long birdie putt at the 17th to get back to 12-under but saw his chances vanish when he pulled his tee shot at the 18th into the water left.  He’d make double and fall back to 10-under to finish in a four-way tie for second with Phil Mickelson, Daniel Berger and Tom Lewis, who shot 61-66 for the weekend.

This was a day where the two best players rose to the top — Thomas and Keopka.  Overnight leader Brandon Todd had another final round nightmare — no birdies and an ugly 75 that dropped him all the way into a tie for 15th at seven-under.  Rickie Fowler started with two birdies over the first three holes but after that, he fell apart at the seams, eventually shooting 73 and finishing in that group at seven-under.

Same for Ben An, who played in the final twosome with Todd.  An shot 73 and finished at eight-under.

Down the stretch, it was Thomas who kept his cool the best, even in the face of tough shots.

“I said ‘get lucky’ —   there’s a lot of luck involved,” Thomas pointed out, recounting his tee shot at the 15th.  “Somehow,  that calmed me down.  You win when you get those kind of breaks.”

Thomas helped his cause with just 25 putts for the round.  He had Jim “Bones” Mackay on the bag and his experience showed.

“I hung on and stayed patient and positive,” said the new No. 1.

Thomas will head for the PGA Championship this week as one of the solid favorites.

He’ll grab the bulk of the attention at Harding Park leading up to Thursday’s start — and rightfully so — he’s back at No. 1 and has three wins this season and a total of 13 wins at the tender age of 27.