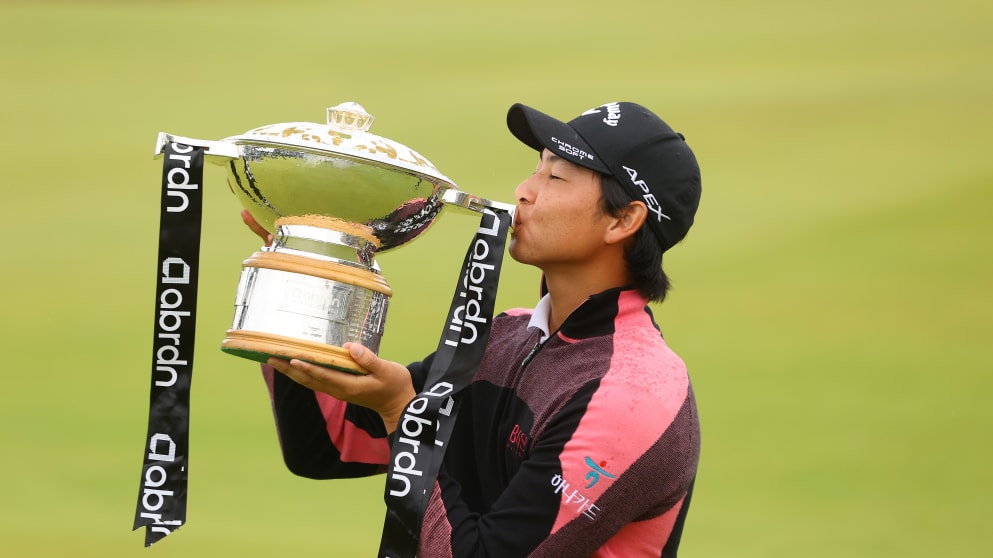 If this week’s Open Championship can follow the drama of Sunday’s finale at the Scottish Open, it should be a week to remember at Royal St. George’s.

The field at the Renaissance Club was one of the best ever assembled for a non-major on the European Tour — five of the world’s top 10 and 25 of the top 50 and it sure looked like Jon Rahm might be the man to beat on a rainy Sunday in North Berwick — finally some Scottish weather showed up although the wind never amounted to much.

What you had was something akin to a Battle Royal for this championship, a warmup for next week’s final major of the season.  World No. 1 Rahm started the final 18 at 13-under par, just a shot behind winless Thomas Detry from Belgium and rising star Matt Fitzpatrick from England.

Min Woo Lee, ranked 240th in the world with one win to his credit, wasn’t on the radar at the start of the final 18 — at 11-under par, he was three behind Thomas Detry and Matty Fitzgerald, two behind the mighty Rahm, surely one of those three would emerge as the day went on.

But it was Lee who started a run of six straight birdies starting at the par five third and he’d get to 17-under at the turn.  Ian Poulter and Ryan Palmer finished well ahead of the final groups and posted 17-under as the score to beat.

After a near 90-minute weather delay, Rahm fell by the wayside leaving Detry and Fitpatrick to try and get the win with Lee pursuing.  All three birdied the easy par five 16th to get to 18-under and they would finish the 72nd hole tied.

It was a fast playoff.  One trip down 18 again and after lackluster approaches from Detry (60 feet) and Fitzpatrick (22 feet) the 22-year-old Lee stepped up and planted his second within 10 feet.  After watching the others miss their unlikely birdie attempts, Lee calmly slipped his into the up for birdie and the win.  The win earned him a spot in the field at Royal St. George’s as well.

“It’s an awesome day, I was pretty proud of how I played. Six birdies in a row, that was sweet. It kind of happened really quick,” an emotional Lee said afterward.  “I could have holed a few more putts, in regulation I missed it by a roll, that was painful but we regrouped and the tournament starts in the play-off, pretty much.  It’s just crazy, I’ve kind of dreamt of it last night and people back home staying up late to watch me, sending messages. This one is for you too.

“I hit a lot of good shots today,” Lee added.  “That (second in the playoff) was just one of them. In that situation, it’s a huge moment but I hit so many great shots.  I’ve been playing really good in recent weeks and just trending, a few mistakes over the whole tournament and wasn’t able to capitalise so it’s awesome to do it here. I’ll enjoy this one,” said Lee, who is the younger brother of Minjee Lee, a star on the LPGA Tour who is ranked 14th in the world.

Meanwhile, 450 miles to the southeast of North Berwick, some stars were already practicing at Royal St. George’s.

Rory McIlroy, who missed the 36-hole cut on Friday, got his first practice in on Saturday.  Bryson DeChambeau was on site with new caddie Brian Siegler, one of the assistant instructors at Chris Como’s golf academy.  Phil Mickelson and Patrick Reed were out getting reacquainted with Royal St. George’s on Sunday.

Masters champ Hideki Matsuyama is out of the Open — he’s still getting positive COVID results.  Bubba Watson pulled out as well, citing possible contact with someone who tested positive.

Along with Lee, Detry and Jack Senior, who closed with 66 in Scotland, both earned spots in the Open Championship.  Brendan Steele replaces Watson in the field.

Meanwhile, back at the John Deere Championship, Ryan Moore finished in a tie for second behind winner Lucas Glover and was entitled to a spot at Royal St. George’s but the former U.S. Amateur champion declined.

Didn’t matter.  The field is full and Rahm and Thomas looked almost ready while Lee, Detry and Fitzpatrick are all good to go.

Onward to the east coast of England and the 149th Open Championship.