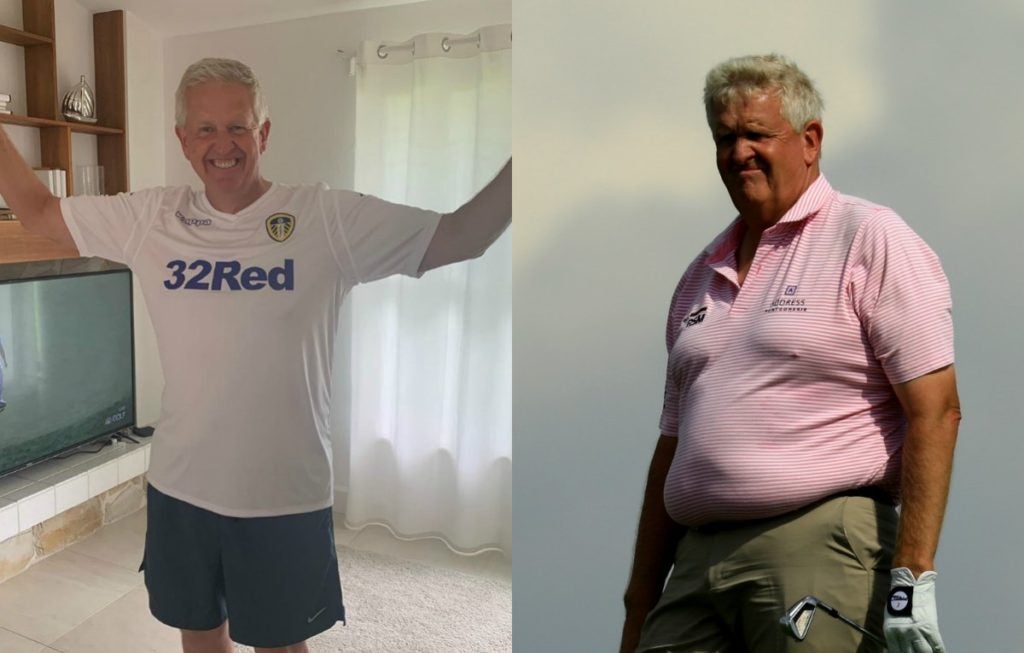 Colin Montgomerie has lost an amazing 40 pounds since last year.

Back in the day, cruel New Yorkers dubbed him “Mrs. Doubtfire.”

Monty has done some serious work to lose weight and has dropped an amazing 40 pounds.  The picture above (right) shows him in July of 2019, the “after” picture on the left shows us the new Monty.

Montgomerie, age 57, is gearing up for the re-start of the PGA Champions Tour next month.

Lee Westwood is the brand ambassador for Close House Golf Club, a resort located a little less than 300 miles northeast of London and just 133 miles south of Edinburgh, close to the England-Scotland border.

Close House is the venue for this week’s stop on the European Tour — the British Masters.  It is the first of six events to be played in the U.K.

Westwood says the course is in good shape and ready for the tournament that starts on Wednesday.

“It’s a better time in the calendar for the golf course. I don’t think any of the players have had any complaints. The greens are quicker, fairways are immaculate. As long as the weather co-operates, we should have a great week,” Westwood predicted.  “The crowds are a big loss. They provide the atmosphere and the noise. You can feed off that as a player and obviously lots of people came to the event and we could have sold more tickets, and everyone enjoyed themselves on the golf course and in the tented village.

“Hopefully having it this time without crowds, in the near future Close House might get it again and people will be able to make it a great event for the surrounding area as they did in 2017.”

Sweden’s Marcus Kinhult is the defending champion.  He opened play with a two-under par 69.  Westwood posted one-under par 70 while the tour’s social media star, Eddie Pepperell, was one of the early leaders with a four-under par 67.

Eddie Pepperell is one of the European Tour’s most active guys on social media.  He’s in this week’s British Masters field and he says he’s slimmed down by going the meat route.

“I’ve taken the opposite route to Bryson DeChambeau. I think it will pay off more for him than it will for me,” Pepperell said this week.  “I started it the week before Qatar, weirdly. It’s not the best diet for mathematics but it’s good for the waistline. I wanted to improve my health a bit as I had a few issues last year, if I’m being honest. I saw some photos, and the way I felt for a 28, 29-year-old, I knew it wasn’t right.”

Pepperell opted for what he described as an “extreme” diet that consisted of a short daily menu — steak, liver and bone broth. He even got his girlfriend, a nutritionist, to switch to the diet from veganism.

“I’ve beefed up in the sense that I’ve eaten a lot of beef,” Pepperell said. “I must say, my body felt amazing for it. I felt just great.”

Pepperell is currently ranked No. 82 in the world, having fallen 17 spots in the rankings as his PGA Tour-based peers compete while he watched from home. While he is qualified for the PGA Championship based on his world ranking, he has already expressed plans to skip the first major of the year because of quarantine requirements tied to traveling to and from the U.S.