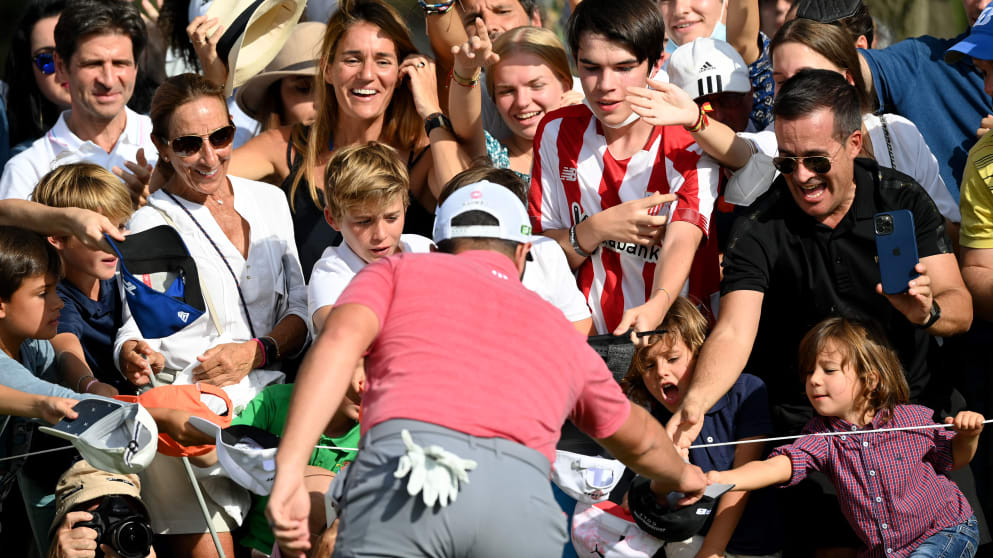 Jon Rahm might not have won the Open de Espana last week in Madrid, but once again, he totally captured the hearts of his Spanish golf fans.

“I’m going to sign for all the children, no matter how long it takes,” Rahm said after he finished 72-69 over the weekend and his 13-under par total left him a disappointing six shots behind the winner — fellow Spaniard Rafa Cabrera Bello.

Rahm is making it two straight weeks in his home country as he’ll tee it up this week at the Andalucia Masters at famed Valderrama.  “Valderrama is Valderrama,” Rahm said last week, leaving no doubt that he’d be in the field at the world famous course, a former Ryder Cup venue.

Rahm has tabbed the Spanish fans “golf hungry” after the European Tour was shut down by the COVID pandemic.

Now the crowds are back and they all want to get a look at the world’s No. 1.

This week’s field is much stronger than last week’s at Club de Campo outside Madrid.

Former NBA star J.R. Smith brought a lot of attention to North Carolina A&T when he enrolled as a freshman and earned a spot on the varsity golf team.

After shooting 81-78 over the first 36 holes of the Elon Phoenix Invitational at Alamance Country Club in Burlington (NC), Smith was hoping for better things in the third and final round.

He played the back nine first and on the par five 12th hole, he hit a wayward tee shot.  While searching for his ball, he walked through pine straw and stepped on a yellow jacket nest.

The varmits attacked J.R., stinging him.  Smith required medical attention and his group got a 15-minute break and allowed the group behind to play through while J.R. was treated for the stings.  He finished that nine, shooting 41 but rallied over his final nine holes with 38 and finished with 79.

“I tried to turn it into a positive,” Smith said.  The two-time NBA champion finished at 27-over, which placed him in solo 81st, ahead of just two players who finished 54 holes and 37 shots back of the winning score.

“I got a lot of great feedback,” Smith said. “Chris Paul was telling me guys were talking about it in the locker room. Guys are really looking for my scores, so I got to take care of business so when I see them it ain’t going to be too much backlash.”