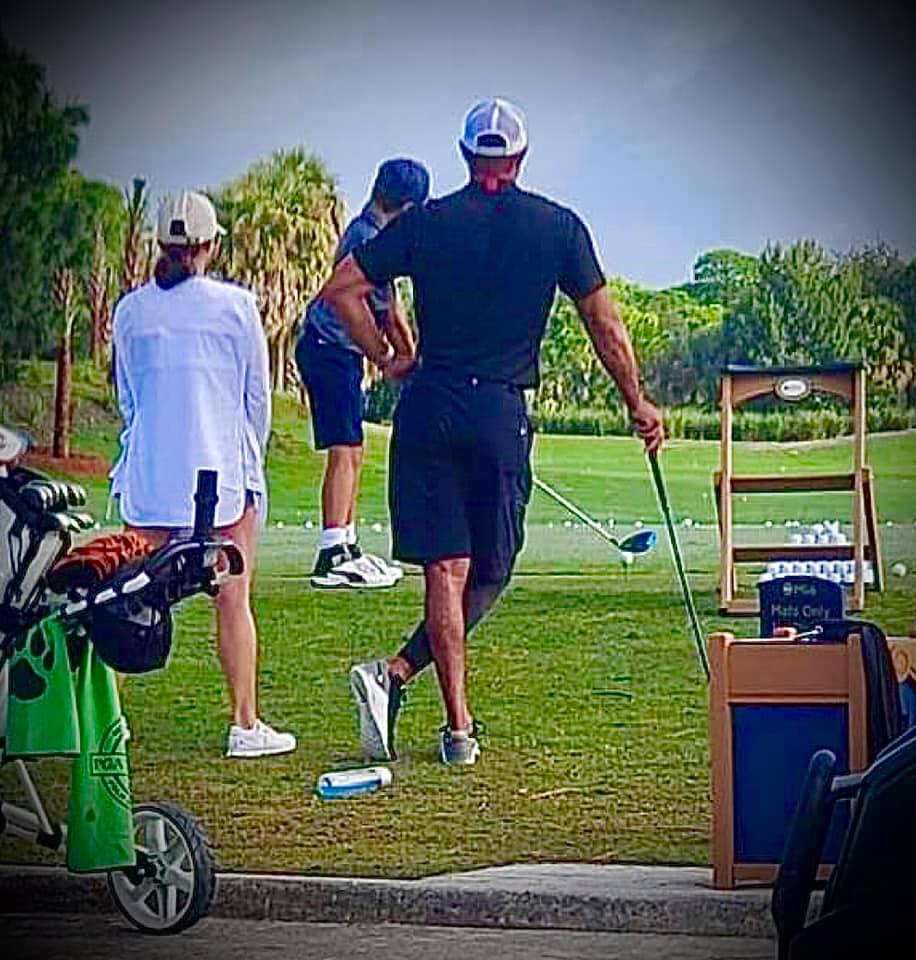 It has been a long 229 days since Tiger Woods suffered severe injuries in a one-car crash in Los Angeles.

But now it’s beginning to look like things are going quite well on the Woods Road To Recovery.

Tiger’s been out and about in Palm Beach County and he’s walking unaided and was spotted last week at a junior event, watching his son Charlie compete.

You can see Woods in the photo above, standing casually, he has that support sleeve on his right leg but he’s getting around without crutches or a cane.

Look closely and see if you spot something unusual in the photo.  Check out Charlie’s golf shoes.  Yes, Tiger’s son is sporting a pair of Puma golf shoes — the brand of Rickie Fowler.  Puma is a direct competitor of Nike, the brand that has made Woods fabulously wealthy.

One might speculate that Woods is ahead of his rehab schedule but it’s been a bit more than seven months now and with his resources, Woods has the ability to have the best physical therapists and trainers at his beck and call.

Don’t be surprised if his first “public” appearance comes at his Hero World Challenge in early December at the Albany Club in the Bahamas.

As for when he begins to work on restoring his golf game?  Well, if he can walk, he can putt and that’s where the road back begins.

Can Tiger return for the 2022 Masters?  It’s certainly going to become the topic of conversation over the next few months.

Will Tiger Be The PIP Winner?

Last April it became public knowledge that the PGA Tour has come out with a Player Impact Program — a $40 million pot — that will reward the player with the biggest social media presence.  There are a number of items the Tour is using, including some secret algorithm.

But some are already projecting that the winner will be none other than Tiger Woods.

Truth be known, Tiger still is the biggest “needle-mover” in golf, his popularity extends beyond the sport and anything he posts will have millions of views.

Tiger has missed most of the 2021 season but he’s still “The Man” in the world of golf social media.

The race to victory at the Shriners Children’s Open was wide open Sunday — until Sungjae Im went on an absolute tear.

The final round at the TPC Summerlin came down to a two-man race as both Im and Matt Wolff found themselves 20-under at the turn.  But that’s as close as it would get.

Wolff took himself out of the chase with bogeys 10th and 13th and had no chance to catch Im, who was tearing it up two groups in front of him.

After his five-birdie run, Im cooled off and parred his way to the clubhouse.  He signed for a closing 62 and beat Wolff by four shots.  Im won his first event in his 50th PGA Tour start and picked up his second in his 100th.  “It was very tough to get my first win but I felt like the second one was harder and harder, but I kept my patience.  I tried to stay composed throughout the period and I’m glad it came,” Im said afterward.

Im is only 23 and is one of the rising young International stars on the PGA Tour but he has something hanging over his head.  He owes the South Korean government two years of military service.  The only way he can receive a waiver is to win a medal at the Olympic Games or the Asian Games so he’ll have a few more tries to avoid losing two years of his golf career.

The Tour stays in Vegas for a second week as the CJ Cup will be played this week at the Summit Club where Jason Kokrak is the defending champion.