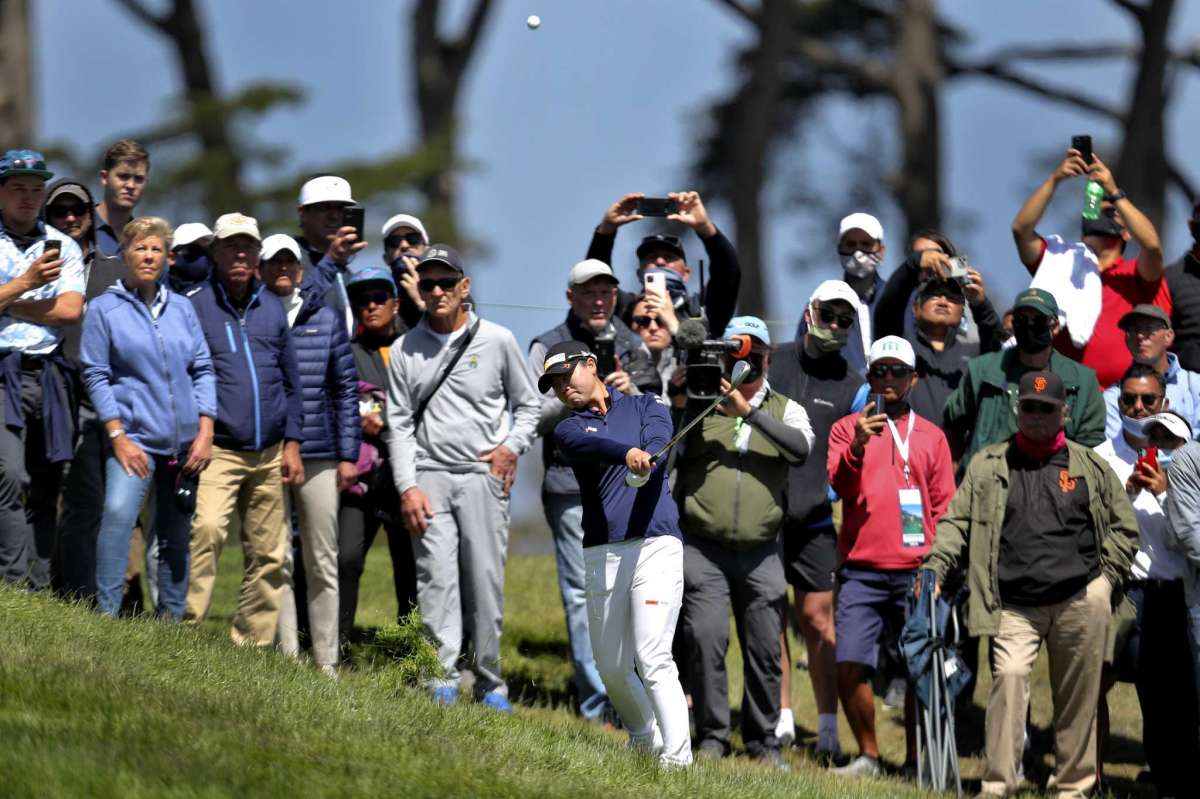 Yuka Saso made up four shots on Lexi Thompson over the final three holes.

Lexi Thompson was in total control of the final round at 76th Women’s U.S. Open — until she wasn’t.

On a sunny San Francisco Sunday afternoon, America’s most popular female player, performed like a major champion for 10 holes at the Olympic Club — but the final eight holes turned into a nightmarish, soul-crushing collapse for the 26-year-old star and opened the door for eventual winner Yuka Saso and Nasa Hataoka to fight it out in a playoff.

Thompson started the final round at seven-under par after an impressive 66 on Saturday, the only bogey-free round of the tournament.  She had the momentum and the crowds behind her.  She then went out and birdied the opening hole but even that birdie gave a foreshadowing of what might lie ahead.  She had just nine feet for eagle and she missed the center of the putter by a good half-inch on the eagle attempt, hitting if toward the toe of the putter, producing a shaky roll.

It sure looked like Saso, who was paired with Thompson, had a bad case of the nerves as she double-bogeyed the second and third holes and by the turn, was five shots behind Thompson as Lexi shot one-under and was eight-under for the tournament heading to the final nine.  A par at the 10th left Lexi five shots in front with eight holes to play.

Then the pressure of a major championship began to expose Thompson’s documented short-game weaknesses.

At the 11th, Lexi was 15 yards short of the green in two then made a hideous chunk of a pitch that didn’t even reach the putting surface.  Her first putt left her a six-footer for bogey and she put an ugly stroke on that and walked off with double-bogey six — the first stage of her collapse had set in.

Suddenly, she was now only six-under, giving life to Saso and Hataoka.

A good par save at 11 left Thompson three ahead with six to play.  At the short par three 13th, she hit a nine-iron to 10-feet but couldn’t make that birdie putt.  At 14 she blocked her tee shot into the right rough, her second came up short and once again, her short game failed again and she suffered another bogey.  After a par at the short par three 15th (132 yards), she had back-to-back par fives and they had been her strength all week.

But with the heat on, she failed to birdie 16 then her short game imploded again on the 17th resulting in a bogey.  She missed a five-footer for her par, putting stroke so ugly on it that the ball didn’t come close the hole.

Visibly shaken, she managed to get an iron in the fairway at 18 but with just 109 yards to the hole, hit a wedge shot that came up so short it didn’t clear the front greenside bunker.  From there she had virtually no chance.  She got it to 10 feet but missed the putt, fell to three-under and squashed any hope of getting into a playoff.

Hataoka finished in front of Saso and Thompson.  After making the turn in one-under, she scored birdies at 13, 14 and 16 and closed with a 68, best round among any of the contenders.  She posted four-under then saw Thompson collapse and Saso tie her.

The playoff was an aggregate of nine and 18, where both players went par-par.  Then it went to sudden death and on the second trip up nine, Saso stuck her second to 10 feet and after Hataoka’s birdie bid from 30-feet missed, Saso drained hers and the 19-year-old from the Philippines became a major champion.

Afterwards, the teenager was nearly at a loss for words but recalled what happened after her two double-bogeys early in the round.  “I was upset but my caddie told me ‘just keep going, there’s many holes to go.’  That’s what I did.  Just thankful I’m here — unbelievable!”

Just as unbelievable was the woeful collapse by Lexi Thompson, who joined some big names who have experienced heartbreak at an Olympic Club’s U.S. Open — Ben Hogan, Arnold Palmer, Tom Watson, Payne Stewart.

Thompson declined to say anything after the loss.

She didn’t need to.

What can you say about a collapse of major proportion at a major championship?