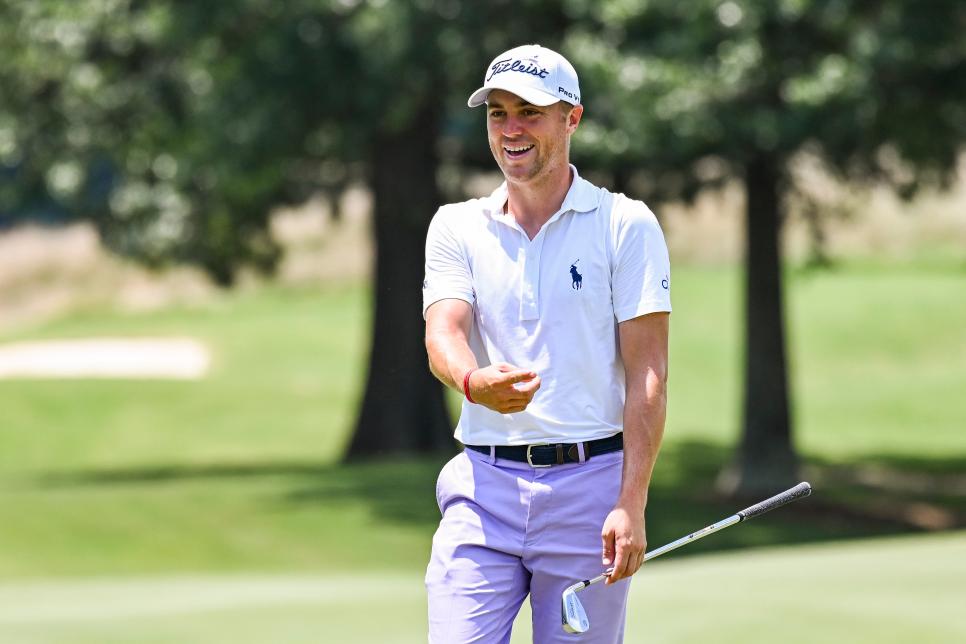 Justin Thomas will be sporting new threads this week in Abu Dhabi.

Evidently the Ralph Lauren brand is one of those “one strike and you’re out” companies.

The world-famous design brand gave Justin Thomas the old heave-ho last week as a reaction to J.T.’s “homophobic-slur” at the Tournament of Champions at Kapalua.

Here’s the statement the company made when it decided to give J.T. the boot:

“We are disheartened by Mr. Thomas’s recent language, which is entirely inconsistent with our values.  While we acknowledge that he has apologized and recognizes the severity of his words, he is a paid ambassador of our brand and his actions conflict with the inclusive culture that we strive to uphold.

“In reflecting on the responsibility we have to all of our stakeholders, we have decided to discontinue our sponsorship of Mr. Thomas at this time. As we make this decision, our hope is that Mr. Thomas does the hard and necessary work in order to partner with us again – truly examining this incident, learning, growing and ultimately using his platform to promote inclusion.”

Interesting is the fact that Thomas will head to the Middle East this coming week to play in the HSBC Championship in Abu Dhabi.

We think it’s important to point out here that the Ralph Lauren brand sells millions and millions of dollars worth of its “stuff” in the Middle East.

The European segment of that company caters to sales of Ralph Lauren branded apparel, accessories, home furnishings, and other such  products made through the company’s wholesale and retail businesses in Europe and the Middle East.

Notice the “Middle East” part of that market.

Those sales from the Middle East pad Lauren company coffers.  There’s just one teeny tiny problem with that.  Middle East countries are notorious for their stance against homosexuality.

“There will be no room for homosexual and queer acts in the UAE. Our society does not accept queer behavior, either in word or in action”.

That pretty much speaks for the Middle East countries and their stance on homosexuality.

Which begs the question:

How does the company give J.T. the boot for a two-second slur when it continues to reap the benefits of huge sales volume in countries that punish and threaten prison, sometime death sentences, to that segment of society?

The move by Ralph Lauren on Justin Thomas and its continuation to do big business in those countries in the Middle East is simply Hypocrisy with a capital “H.”

So look for J.T. to show up in Abu Dhabit sporting the Foot-Joy brand from head-to-toe.

When Grupo Salinas announced last week that it had no intention of forking over those big sponsor dollars to the PGA Tour unless it could have its big-time hospitality setups at the WGC-Mexico event, the PGA Tour had no choice but to find another location.

COVID has dictated no spectators and no big hospitality areas and so in reaction to that, Grupo Salinas tore up the check.

The PGA Tour has moved the event to the Concession Golf Club on the west coast of Florida — Bradenton (next door to Sarasota) to be exact.

The event will be called:  World Golf Championship at The Concession.  Tournament dates remain the same — February 25-28.

The Concession is an excellent, difficult layout.  It’s a Jack Nicklaus-Tony Jacklin design collaboration named after Nicklaus’ now famous gesture at the 1969 Ryder Cup, when he conceded Jacklin his final putt to secure the first tie in the biennial match’s history. The Concession is made up of a variety of landscapes—meadows, wetlands, oak hammocks and pine forests—with spectacular bunkering and big-time green contours.

The Tour says the move is temporary.  It plans on returning to Mexico in 2022, provided COVID is far enough in the rear view mirror.

According to the letter players received, the move to Florida is temporary. “The tour is grateful for its partnership with title sponsor Grupo Salinas and their influence on the success of the WGC-Mexico Championship over the past four years. We look forward to returning to Mexico in 2022,” wrote Tyler Dennis, EVP of the PGA Tour. Players were also told “there will be no changes to the tournament eligibility criteria as a result of this news.”