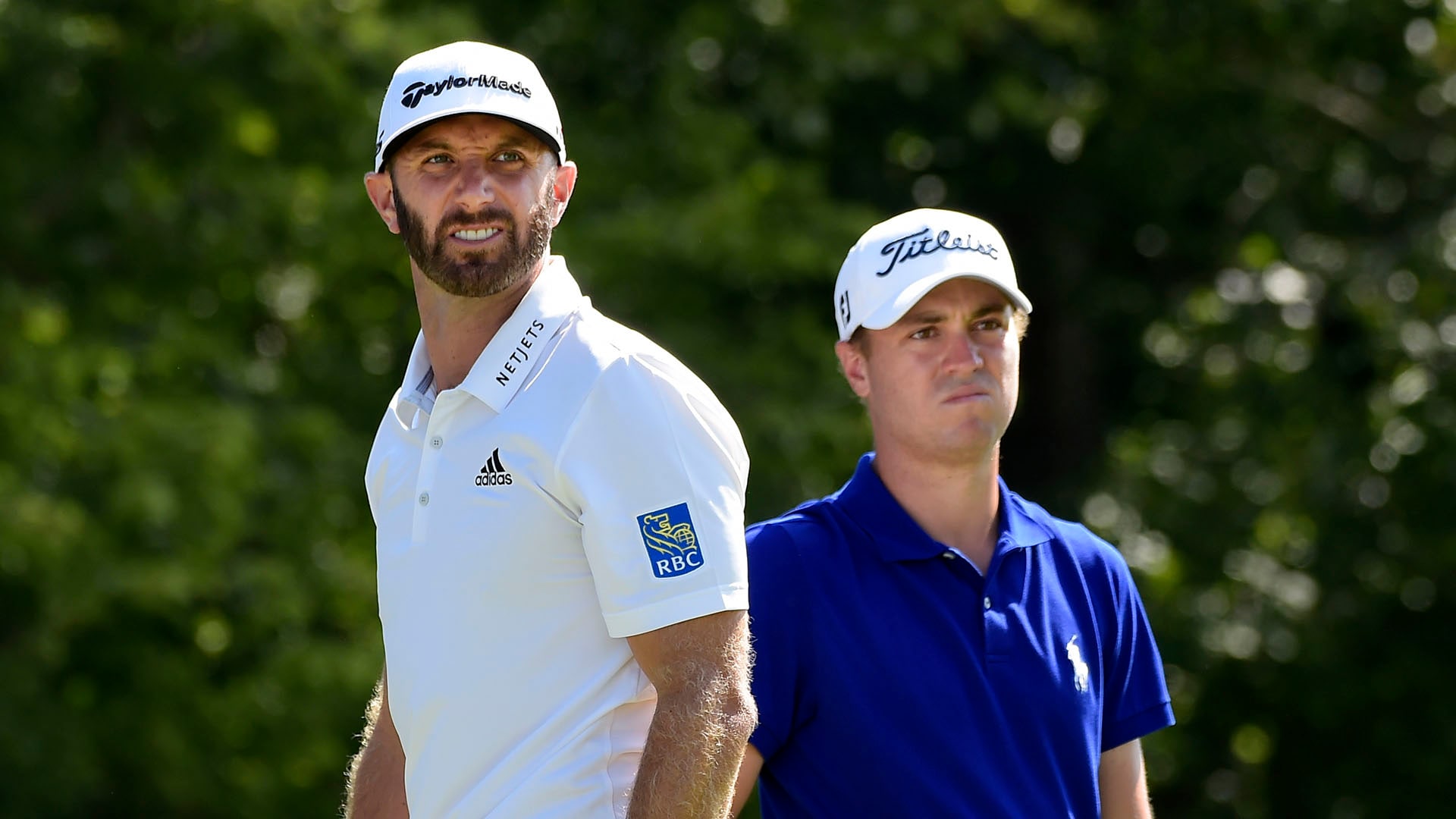 By the time the world’s No. 1, Dustin Johnson and No. 2, Justin Thomas showed up at the Copperhead course on a beautiful Florida afternoon, Kegan Bradley had already come and gone, making his first round mark with an eye-opening 64 at The Valspar.

Bradley painted quite a picture on day one Thursday, especially over the closing stretch where a hot putter helped him birdie four of the last five holes — a very impressive feat on a difficult stretch on a very demanding golf course.

A huge crowd gathered to follow D.J. and J.T. with young Joaquin Niemann in tow to round out their group.  No doubt they noticed what Bradley shot, it was hard not to.  There weren’t many witnesses but there were two important ones — Keegan’s wife Jill and young son Logan.  They watched dad and Logan gave out a loud cheer when Keegan holed a closing birdie putt from just inside 21 feet.

Ball-striking isn’t an issue with Bradley, it’s the putter and when it works, he scores and he scored on Thursday to the tune of seven-under par.

“Best round of the year,” Bradley called it even though he shot 64 at Bay Hill in the third round.  “Today was an all-around just great day. Basically zero stress the whole day. I didn’t really come close to making a bogey, so that was a really fun day to be out there and play well.”

After a pair of front nine birdies, Bradley lit it up coming home.  “It feels good to go around a course like this and shoot that score,” Bradley said. “This is a tough track, demands a lot, ball striking-wise and I did that today.”

D.J. and J.T. had a tough act to follow but Thomas got right after it.  The pre-tournament favorite rolled in a 12-footer for eagle at the pretty easy par five first and that drew a huge roar.  At the second, J.T. stuffed his approach within two feet for an easy birdie.  Three-under after two.  He stayed at that number through five and what started out looking like a super round, became a lip-burning exercise in frustration.  By day’s end, around dinner-time, J.T., who turned 28 on Thursday, canned a 13-footer at the 18th to shoot a modest two-under par 69.

D.J. wasn’t as fortunate.  No surprise, the world’s No. 1 has been struggling a bit as of late.  He made a putter switch a few weeks ago and like Thomas, he just couldn’t get much done with the flat-stick.  A three-birdie, three-bogey performance from the world’s No. 1 wasn’t exactly what his huge gallery was hoping for.  Not much to whoop it up about.  They shoulda seen Keegan.

J.T.’s round left him tied for 28th, not great, not bad.  D.J.’s 71, even-par, left most of his followers disappointed.  But that’s how its been lately for him.  You might recall he missed the 36-hole cut at The Masters where he showed up hoping to defend his title from last November.  Oh well.

Paul Casey has won the last two Valspars (2018, 2019).  Last year’s got wiped out by COVID.  Casey opened with 70 two years ago when he won with an eight-under par total for four rounds.  He shot 68 on Thursday, ahead of his winning pace two years ago but a perfect day for scoring put an assortment of players well under par to get their week started.  There was just a slight breeze off of the Gulf and the greens were simply perfect.

But this is a track that is unforgiving.  Phil Mickelson shot 73, former U.S. Open winner Gary Woodland continues to look lost.  He shot 77.

Then there was Monday qualifier Mike Visaki.  He was living his dream — playing a tournament on the PGA Tour.  He shot 74 and will be able to tell his friends he beat Woodland and tied former U.S. Open champ and Olympic Gold Medal-winner Justin Rose.

Visaki will probably miss the cut, as will half the field.

But on a day where Bradley went low and the world’s top two ran in place, there was at least one guy living his dream.

Friday Morning Update:   Another perfect Florida morning, temps in the 70s and little to no wind and perfect greens brought out more low scores.  Lucas Glover shot 65 to finish eight-under for 36 holes.  Charl Schwartzel (after losing in the team playoff last week) shot 65 and was in at seven-under.  Justin Thomas didn’t have many post-birthday birdies — none over his first nine holes and he was one-over at the turn, flirting with the cut line.  But he got back to even par for the day with a birdie at the fourth, his 13th hole of the day.  No fireworks from the world’s No. 1 either.  Dustin Johnson was two-under through 15 holes with the projected 36-hole cut looking like one-under par 141.