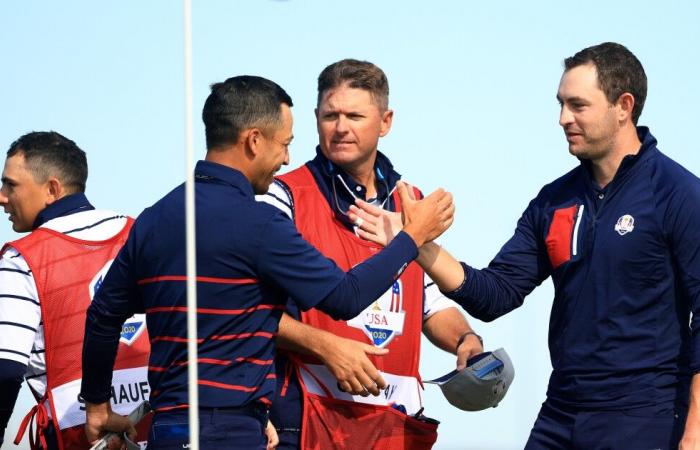 Best player without a major -- Xander Schauffele or Patrick Cantlay?

There’s a PGA Tour charter flight that will leave Las Vegas after the CJ Cup and it will head for Tokyo, taking some of the “name” stars to Japan to compete in the Zozo Championship next week.

After that, it will be break-time, vacation-time for a lot the Tour’s high-profile players.  You may see a few of them in the European Tour’s season-ending DP World Championship that wraps up that tour’s season.

So let’s take a look at some stars and what needs to happen for them in 2022.

Dustin Johnson:  The world’s No. 2 didn’t notch a PGA Tour victory for the first time in more than a decade.  With 24 wins, D.J.’s a lifetime Tour member and headed for a Hall of Fame career.  With only two majors, he needs to step up and win at least two more or he will be viewed as an underachiever.  At age 37, he’s in magnificent shape and the next five years should afford him a lot of chances to fatten up that wonderful resume.  But D.J. needs to putt better in 2022.

Justin Thomas:  With 14 wins and one major and now Bones Mackay on the bag for 2022, J.T. needs validation in the majors.  One just isn’t cutting it for a player with his talent level.

Xander Schauffele:  Sorry but Olympic Gold Medals are not majors and going into 2022, he’s neck-and-neck with pal Patrick Cantlay for that unwanted title:  “Best Player In The World Without A Major Championship.”  Needs to drive the ball better at crunch time to break through and get that first major.  He’s praying they don’t ban the “arm-lock” putting method.

Patrick Cantlay:  Cantlay’s approaching the age of 30 and is finally coming into his own.  It would be a surprise if he DIDN’T win a major championship in 2022.  Right now he’s tied with Xander for — you know what — Best Player In The World Without A Major Championship.

Bryson DeChambeau:  This guy will grow on you if you give him a chance.  With eight wins and a major, all he needs to understand is that come crunch time in majors, he should not over-analyze.  Needs to get rid of that “paralysis through analysis” stuff that overtakes him too often.  He was totally in his element at the recently-completed Long Drive Championship and hopefully he’ll compete again next year in that event and it will be televised.  Bryson needs to figure out how to make his game fit Augusta National.

Jordan Spieth:  He’s back.  Jordy’s back, getting his swagger back on, focusing on keeping that tee ball in the fairway.  That putting gift is generational and Jordy needs to buckle down, win the PGA Championship and complete the Career Grand Slam.  He’s 28, time is on his side.

Rory McIlroy:  Rory slipped from No. 4 in the world rankings in 2021 to No. 14.  Not good.  Until Rory dials in his wedge play, he’ll struggle.  He recently drew backlash on social media.  Rory simply said that when he plays his best — he’s the best in the world.  Problem is we haven’t seen his best in a long time.  He’s a win short or lifetime membership on the PGA Tour (has 19, needs 20) and has four majors — but is a Green Jacket shy of that special Career Grand Slam.  He’s getting better but still lacks consistency.  Needs to play his way back into the top 5 in the world.

Brooks Koepka:  We now know who the “bad guy” is in that Koepka-DeChambeau pseudo-feud.  Yes, Brooksie.  This guy obviously thinks quite highly of himself after those comments he made to Golf Digest in the now infamous Brooksie’s Poolside Chat.  Fifteen majors?  Well, ask Tiger how tough it was to get to 15 and to quote that old political line:  “We know Tiger Woods and Brooks Koepka is no Tiger Woods.”  Eight Tour wins, half are majors.  He had a great two-year spurt.  Given the talent level around him, he’ll have to take himself to yet another level simply to get to double-digit majors.  That means he needs to have what amounts to at least two or three Hall Of Fame-worthy careers.  At age 31, it might sound like time is on his side but given that he’s the most injury-prone player among the top stars, well, the spotlight’s on you — Brooksie.

Jon Rahm:  We’ve waited to mention the world’s No. 1.  He’s beginning to discover how good he really is but you wouldn’t know it from the way he’s played over in his home country of Spain the last two weeks.  Shows he’s human.  Needs to add another major in 2022.

Scottie Scheffler:  Time to stop talking about “potential” and win a PGA Tour event sooner than later.  One of those guys who should win every year.

Rickie Fowler:  Needs to end that head-scratching slump.  Needs a win in 2022 to validate his comeback.  Simple as that.

This list could go on and on.  But these are some of the most high-profile guys on today’s PGA Tour.

And yes, one final guy, THE guy — Tiger Woods.  The golf world will go bonkers when Tiger Woods returns to competition.

It’s looking more and more like that’s a situation of When, rather than If.