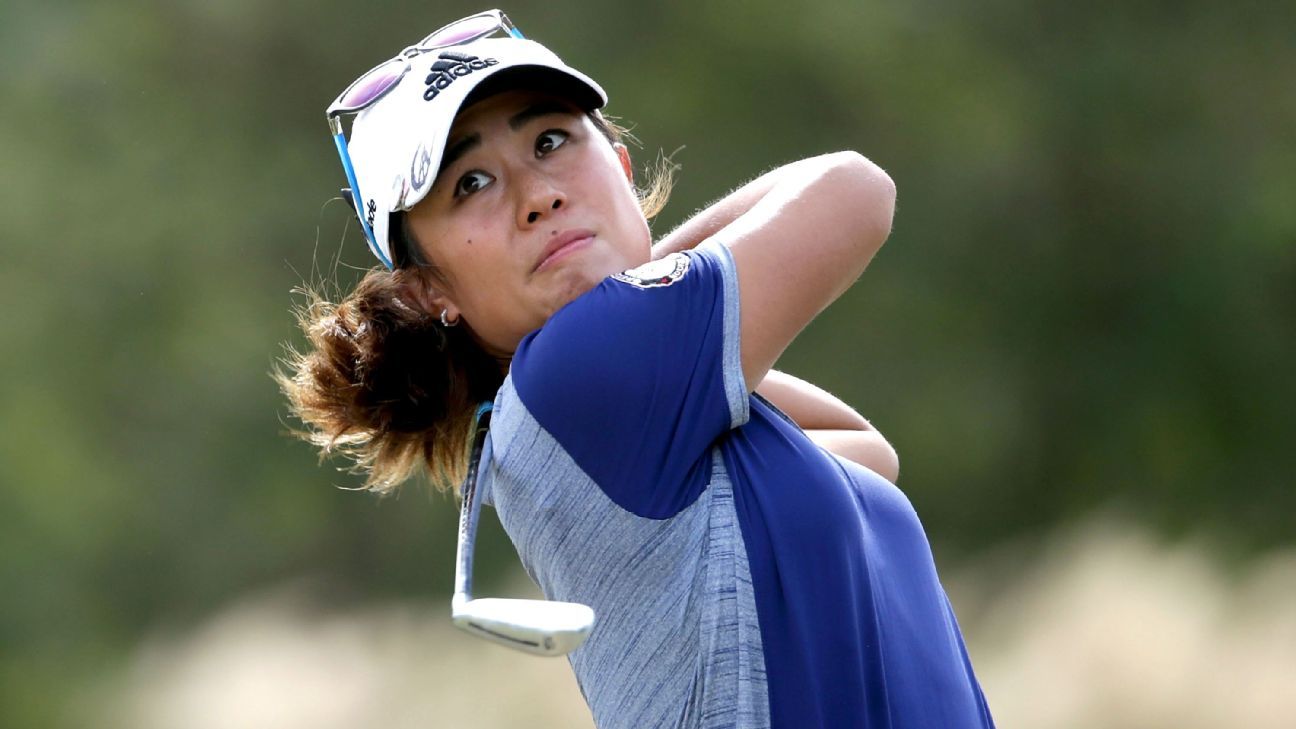 Danielle Kang made up five shots on Lydia Ko over the final five holes Sunday.

Lydia Ko looked like she would walk away with the Marathon Classic title on Sunday but an incredible collapse helped give Danielle Kang her second LPGA win in as many weeks.

Ko was looking for her first victory since 2018 and it looked like an easy stroll down the stretch at Highland Meadows Golf Club.  She was five shots ahead of Kang with five holes to play.  But things began to crumble for Ko starting at the 13th hole.  That’s where Kang made birdie to cut a shot off that lead then at the 15th, there was a two-shot swing when Kang made another birdie and Ko took bogey.

Another bogey at the 16th by Ko gave Kang a chance.  Two shot with two to play — two par fives.

Both made pars at the 17th and Ko took a one-shot lead to the home hole.  It was there that Ko imploded, her short game betrayed her and she’d end up with a double-bogey, handing the title to Kang, who made par and finished at 15-under par with a closing 68.

Ko tied for second with Jodi Ewart Shadoff, who shot 67 and got to 14-under.  Ko finished with 73.

“It’s tough,” she said. “Obviously, not the finish that I had envisioned but Danielle played great today. Every time she made a mistake she fought back with a birdie, so credits to her,” said the 23-year-old New Zealander.

Kang, who is good friends with Ko, felt for her friend after the unexpected turn of events.

“I mean, there are really no words, to be honest,” said Kang of what happened to Ko on the 18th. “As a competitor, friend, I mean, she’ll bounce back and she’s a great player and she’s proven to be one of the best players in the world.”

It’s been a long time coming for Andy Sullivan but he’s now a winner again on the European Tour.

Sullivan took a five-shot lead into Sunday’s final round at the English Championship and the only question at Hanbury Manor might have been who would finish runner-up?

Adrain Otnegui of Spain answered that question.  He made an early run at Sully but the Englishman refused to yield.  A final round 65 by Sullivan put him in at 27-under par, a whopping seven shots better than second-place Otnegui.

It was an emotional afternoon for Sullivan, who hadn’t tasted victory since the Portugal Open back in 2015 — the year he won three times.

“It’s frustrating that I didn’t kick on from 2015 but it’s just one of those things,” he said. “It feels like the weight of the world is lifted off my shoulders that I’m back in the winner’s circle. I’m just proud of myself to come back and get that win in the manner I did.  It didn’t feel like a seven shot lead out there. I got on 12 and see that Adrian was two shots behind and breathing down my neck, and it was just nice that I could keep pressing on with the putter there – it just got hot.”

Otaegui was six back at the start of the day and did press Sullivan, for just a few holes.  Andy put it in overdrive with four birdies over his final seven holes to run away with it.

He was emotional after the victory.

“I think it was just the people that have missed this win, my brother-in-law was only 24 and he was taken from us so it’s quite emotional for him not to witness it. It means quite a lot for me to do it for him today, and a good friend of mine has passed as well.  So it means a lot to do that for them and it’s nice for my family, to win for my little boy who is only two years old, it’s just nice for him to see Daddy being successful, he hasn’t quite seen that yet. Also for me, I can’t remember too much about my emotions in the first three wins but I was fighting the tears back today down the last three holes.

Another player who can be proud of his play since the restart is 19-year-old Rasmus Hojgaard from Denmark.  He closed with 64 to take solo third at 19-under.

It was the impressive young Dane’s third successive top six finish on the UK Swing, following a second place finish at the British Masters and last week’s T6 at the Hero Open.

Next stop on the UK swing will be this week’s Celtic Classic at the Celtic Manor Resort in Wales.

Gabriela Ruffels from USC was trying to win back-to-back titles at the U.S. Women’s Amateur finals on Sunday at Woodmont Country Club in Rockville, Md.

Ruffels was locked in a tense 36-hole final against high school senior Rose Zhang from Irvine, Ca.  It looked like Ruffels would prevail on the 36-hole after Zhang’s drive ended up in the thick rough and her second ended up 40-yards short of the green.  But she pulled off an incredible recovery, save par, and sent the match into sudden-death.

On the 37th hole, Ruffels had a three-footer for par to send it to a 38th hole but saw the putt lip out — handing the victory to Zhang, who will play her college golf at Stanford.

Zhang came close to pulling out of the field prior to the start.

She was battling a left wrist injury and her coach, George Pinnell, wanted her to withdraw. She chose to play and ended up the champion.

“My coach was actually really mad at me for coming here,” Zhang said. “And I was like, ‘No, it’s OK, I’ll just rest it,’ not play for 10 days before the tournament. And then, you know, here I am.”