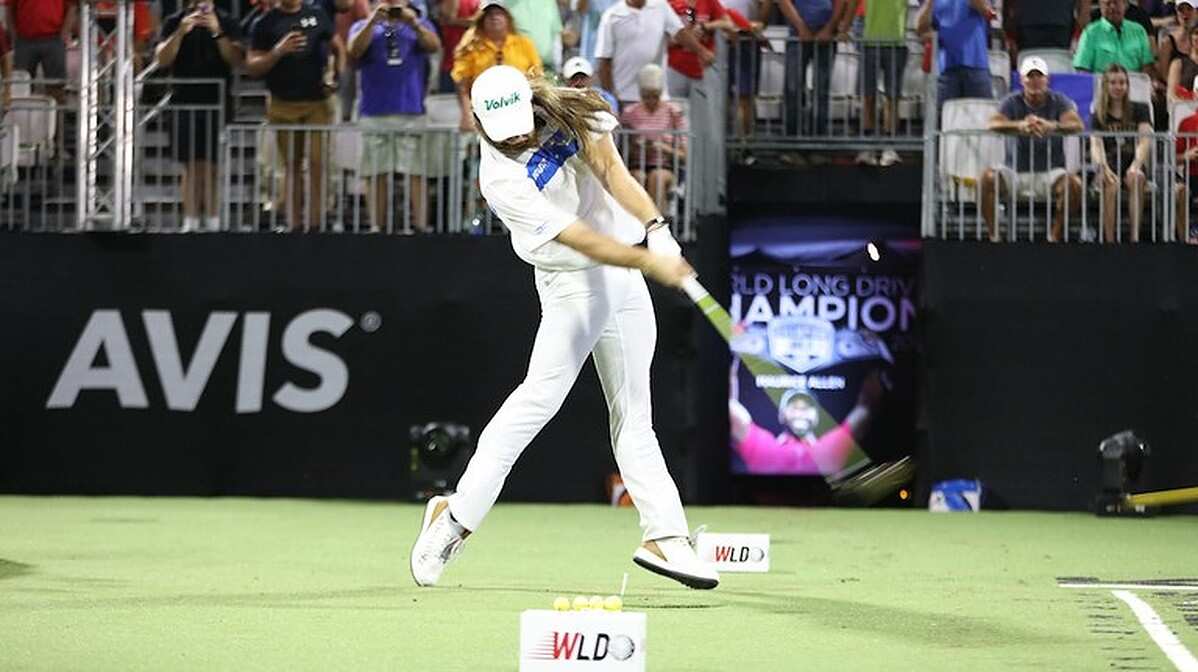 Kyle Berkshire launched three drives past the the 400-yard mark in the finals.

Once again, Kyle Berkshire proved he’s still the longest of the long, The King Of The Beasts when it comes to smashing a golf ball and making it fly mind-boggling distances.

“Cool stuff,” was how PGA Tour player and major champion Graeme McDowell described the finals  where the top 16 fought their way to championship day last Friday.  It all started on Tuesday and the 80 were whittled to 64 then the 64 were cut down to 32 on Wednesday.  On Thursday, the 32 became the Sweet Sixteen — Kyle, Bryson and Josh were among them.

The two favorites coming in were Berkshire, of course, and the very muscular Justin James, who looks shorter than 6-1 and heavier than 205 pounds.  Both Berkshire and James are Florida guys.  Berkshire is based out of Orlando, James out of Jacksonville.  Side note — James is the son of a PGA professional.

Normally these four days in Mesquite don’t attract all that much attention.  In the past this event has been on television but not this go-round.  You could stream it live on the PLDA site, as Graeme McDowell did along with 25,000 other admirers of these long-ball experts.

But this year’s contest was no normal week.  All because of one guy — Bryson DeChambeau.  DeChambeau trained a week before the Ryder Cup at Bobby Peterson’s Speed Shop in Newton Grove, N.C.  Yes, as Bryson said, it’s basically in the middle of nowhere.  Bryson announced from the Speed Shop that he’d be heading to Mesquite to take on his pals Berkshire, Koch and the rest.

After day one, Bryson was already an attention-getter.  The crowds loved him and he loved them back.  He also gave his fellow competitors a lot of smiles and support.  He was flat-out good for the event, maybe to the point that if he’s in this thing earlier enough next year, someone might consider televising it.  Beats the heck out of Mickelson and Brady.

Bryson moved on easily to Wednesday and drew this comment from one of his fellow competitors:

Bryson was impressive, as were all the final 16.  It was a lot of hard swinging.  There were divided into groups of four and each group hit in five sets — six balls per set.  Points for finishing first, second or third in your set.

DeChambeau made it to the final eight with Berkshire and James.  Koch didn’t, he finished 11th — a good showing given the depth and power of this field.

Desert winds made some days pretty tricky.  Truth be known, most of these guys miss the grid boundaries more often than they hit it.

Bryson made the cut to the final eight but his journey ended there — the Final Four were Berkshire, James, Germany’s Martin Borgmeier and Bryce Verplank, nephew of PGA Tour multiple winner Scott Verplank.

“I felt like I just won something today in a big PGA (Tour) tournament — even though I just qualified for the next day,” Bryson said earlier in the week.

It was that much fun, great atmosphere.

And yes, golfers all over the world are thrilled by the long ball.

Check out this video from Josh Koch on Bryson’s debut at this event: