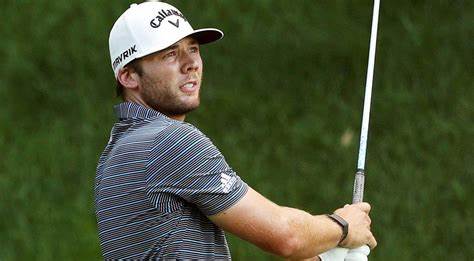 Sam Burns got the new season going with his second PGA Tour win.

Sam Burns found himself in the thick of things late Sunday at the Country Club of Jackson with a lot of wanna-be-winners struggling to win their first PGA Tour event at the Sanderson Farms Championship.

Burns used his experience, his superior fire-power and a lot of determination down the stretch to notch his second career victory with a closing 67 and a clutch back-nine performance.

Nick Watney finished well ahead of the leaders and posted a seven-under par 65 spurred by what Watney called “my best putting round.”  Watney posted 21-under par and waited to see who might catch him, or worse, who might pass him.

Burns started his run with a birdie at the 11th then added three straight starting at the 13th.  He hit the par five 14th with a beautiful five-iron that left him just 20 feet for eagle.  He two-putted for birdie to take the lead at 22-under then at the short, 316-yard par fourth 15th, his drive hit the green on the fly and settled well behind the putting surface.  He then hit a beautiful pitch to two-feet and easily went to 23-under.  He was in total control.

Burns stayed in control with easy pars at 16 and 17.  “On 17 green, I saw where I stood and all I needed was four or five at the 18th because the guys behind were too far back and were running out of holes.  Burns missed the 18th green, his third gave him nine-feet for par but he missed.  Didn’t matter, he tapped in for 67 and a one-shot victory over Watney and Cameron Young.

“It’s huge,” Burns said of the win.  “First event of the new season for us.  This is the closest I get to play at home (Louisiana) — had a lot of family and friends here.  Stuck with our game plan and had purpose for each shot.”  Burns buried the field with his ball-striking.  He was first in Strokes Gained tee to green and first in Strokes Gaines for his approach shots.  His putting was sour as he was 57th in Strokes Gained Putting.

It was just the opposite for rookie Sahith Theegala.  He held the overnight lead at 18-under par and was in the thick of it with three front nine birdies that put him at 21-under par at the turn, in good shape for a first victory.  But his driver hurt him.  Wayward tee shots led to bogeys at 10, 11 and 13 and took him out of the hunt.  He had a birdie at 14, shot 71 and finished tied for eighth.