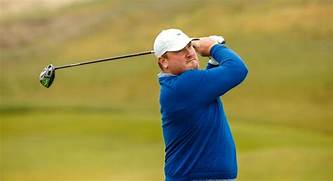 Kyle Williams shot 70 and earned 25 points for Friday's first round.

Kyle Williams was the surprise name at the top of the scoreboard Friday at the American Century Golf Classic.

Williams, a defensive tackle for the Buffalo Bills, put together a two-under par effort and racked up 25 points in the first round of the 54-hole celebrity-laden event at the Edgewood Tahoe Golf Club.

Romo bogeyed four of his last five holes to finish his day on a sour note but he kept himself in the hunt.

Miguel-Angel Jimenez Can Break His Own Record:

Miguel-Angel Jimenez already holds the record on the European Tour as the oldest winner.

He’s trying to re-write that record.  The 56-year-old Jimenez shot 65 Friday and leads the Austrian Open at the halfway mark.  He’s 11-under, two clear of five players tied for second at nine-under, including first round leader Joost Luiten.

“It feels great,” Jimenez said, puffing on a post-round cigar.  “Four months without competing, it’s nice getting back into a tournament and feeling the tension again — I was excited to get back. I miss the competition.”

Jimenez, a 21-time European Tour winner who is making his 705th career appearance, already owns the first, second and third-place marks as the oldest player to win a European Tour event.  Jimenez won the Spanish Open in 2014, at 50 years old and 133 days.