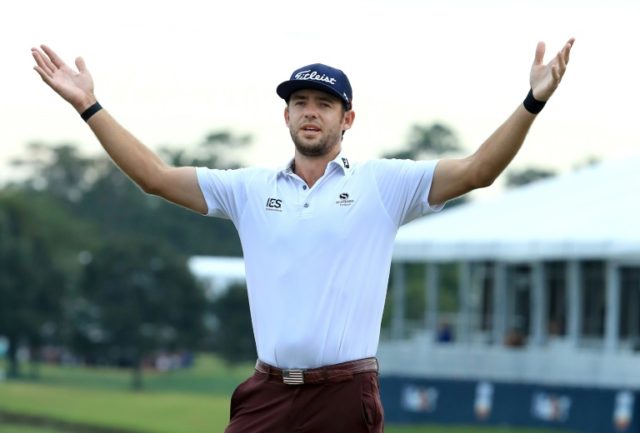 Lanto Griffin earned his first PGA Tour win with a clutch six-footer at the 18th.

Lanto Lands One — A Big One In Houston

Lanto Griffin was one big bundle of emotion Sunday at The Houston Open and he had good reason.

Griffin is the newest winner on the PGA Tour, he’s not part of the youth movement, he’s been at this for quite a while, going through mini-tours, qualifiers then finally grinding through the Web.com and Korn Ferry seasons.

Suffice to say he is the first player named Lanto to reach the PGA Tour, the first-ever to win.  He admits his parents were hippies and named him after a Chinese philosopher, Lord Lanto, master of the wisdom ray.

Griffin, who grew up in Blacksburg, Va., finished sixth on last year’s Korn-Ferry Tour and like so many others last week, was another little-known player in a Houston field devoid of stars.  By Sunday afternoon, he was locked in a three-way battle with Mark Hubbard and Scott Harrington.

Harrington, playing ahead of Griffin and Hubbard, had it to 14-under through 16 holes, tied with Griffin.  He made a big mistake when he three-putted the 17th green, parred the difficult 18 then settled in to see who Griffin would finish.

Griffin made two huge putts down the stretch.  The first was from 35-feet for birdie at the par three 16th to move a shot in front of Hubbard and Harrington.  Hubbard and Griffin parred 17 then at the 18th, Griffin made things interesting when he drove in the right rough and had a testy lie.  He hit a really good shot but still round himself on the right side of the green, 60 feet from the hole.

Hubbard hit a great drive and got his approach to 27 feet with a decent look at birdie.  He watched as Griffin’s first putt settled a nervous six-feet past the hole.  Hubbard missed his birdie attempt, tapped in and watched Griffin.  Griffin looked totally calm as he stroked his winning par putt dead center.

Tears flowed, hugs ensued and the tour had its newest champion.

He credited long-time friend Steve Prater, who is an instructor at Roanoke Country Club but was in Blacksburg as a golf instructor when Griffin lost his father at age 12.  Prater and many in the Blackburg community gave Griffin enormous support through the years.

Lanto spoke of his late father after the win: “I bet he’d be pretty proud,” he responded while trying to hold off the tears. “He got me started. He got me a set – I don’t know if I’ll be able to tell this story – but for Christmas in 1996, he got me a 5-iron, 7-iron, 9-iron, putter, 3-wood and he got me into golf.  And then Steve Prater, he took it from there.

“I wouldn’t be here without him (Prater),” Griffin said. “He opened every door in golf that I ever had, teaching me for free, giving me a membership. He’s had my back the entire journey.”

Prater, watching the afternoon on television, was excited for his friend.  “It’s been a great relationship. He’s such a special person. At the time, when you’re doing those things, you don’t realize how beneficial they can be. Only later in life, you understand that those things were really important for him.”