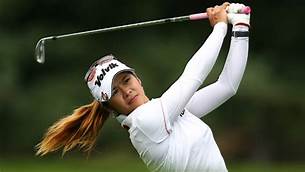 Pornanong Phatlum shot 63 to take the first round lead at he ShopRite Classic.

Make it was because the word “Shop” is part of this week’s stop on the LPGA Tour that had everyone going low at the Stockton Seaview Golf Club on the Jersey Shore.

Whatever it was, seems like everyone went low Friday in the first round of the LPGA’s ShopRite Classic.

Pornanong Phatlum from Thailand was the best of the best early in the day with an eight under par 63.  By late in the afternoon, she had company at the top and it was none other than the winner of last week’s U.S. Open — Jeongeun Lee6, who was eight under despite three bogeys on her card.  But the pair at the top had a one shot lead over three players.  One of them was Lexi Thompson, who came up with her low number a week too late.

“This is a very gettable golf course. A lot of birdies out there because it is playing a good bit shorter, I think,” said Thompson, who like the rest of the field, found the greens complexes a lot easier than those last week at the U.S. Open.  ” The defense on this golf course is basically the wind. If it gets blowing out here, it definitely plays a little harder. But a lot of wedges into the greens, so definitely a lot of birdie opportunities,” said Thompson.

Fellow American Kristen Gillman and Huni He of China joined Thompson with 64s.

Easy?  How about 71 players under par.

A good respite after last week’s misery at the Country Club of Charleston.