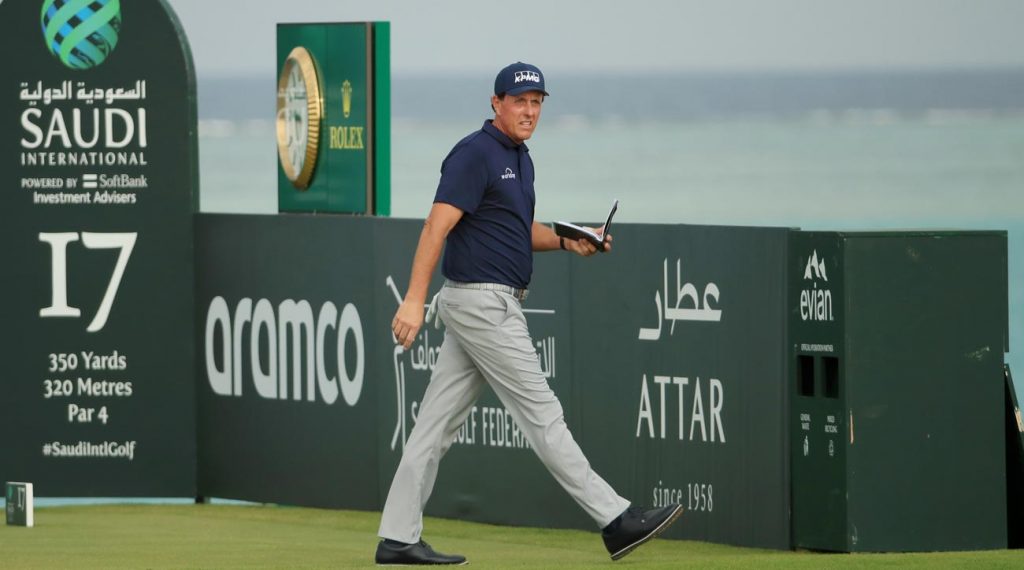 Phil Mickelson hasn't had a top 10 finish in nearly a year.

Things haven’t gone all that well for Phil Mickelson over the past  year.

Yes, he won the AT&T at Pebble Beach last year but following that victory, he’s gone 12 months without a top 10 anywhere in the world.

That slump finally came to an end Sunday at the Saudi Invitational  — sadly, there wasn’t anyone watching Phil’s best performance in a long, long time.

Lefty has fallen to No. 86 in the world but found himself with some faint hope before Sunday’s finale at the Royal Greens Golf Club.  Phil got off to a roaring start.  After a par at the first hole he went birdie-birdie-birdie.  He was nine-under and after leader Graeme McDowell’s bogey at the first hole, suddenly Mickelson was within two shots of the lead.

The bad news is that Mickelson went on a long par run — he ran off 11 straight in windy conditions with no spectators on the golf course, save a handful that watched him.  His par run ended when he missed the green at the par three 16th and failed to get up-and-down from a greenside bunker.  He bounced back with birdie at the par five 18th to finish at nine-under and eventually tied for third with Dustin Johnson and Gavin Green.

It was overall a good week for Mickelson, who shot rounds of 66-70-68-67 — his best run in a long, long time.  It also gave him some hope and momentum as he returns to Pebble Beach this week to defend his title at the AT&T Pro-Am.

“I haven’t been at my best since I won Pebble a year ago, and I’m excited to go back there next week with a little bit of momentum,” Mickelson said. “I feel like I have been playing well, but yet I haven’t had the results. I missed a couple of cuts and this week I really started to put things together and it’s a great week to build off of.”