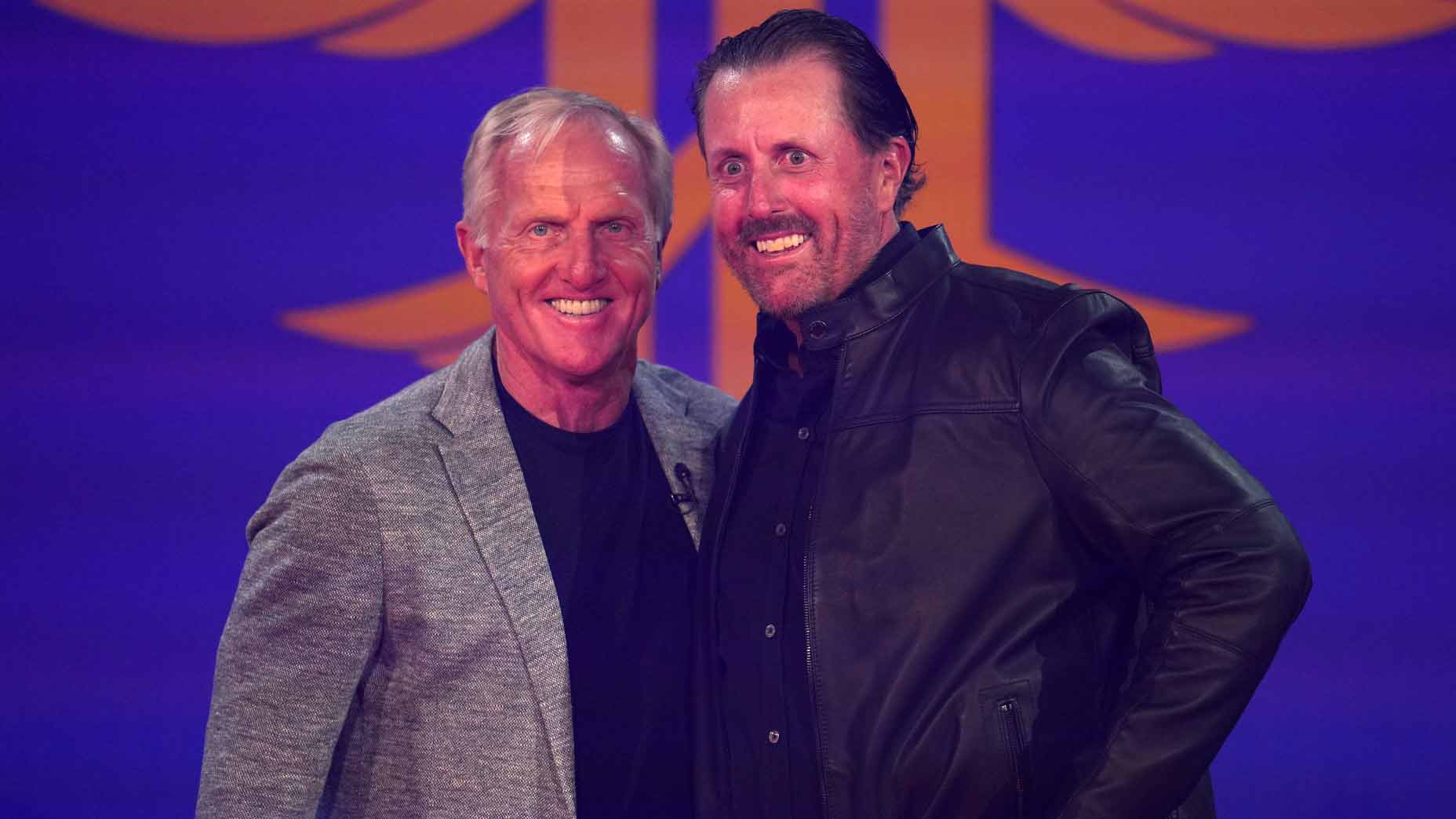 The "Lamest Commissioner" and the newly-suspended Phil Mickelson.

No, the filthy Saudi sports-washing money isn’t but everything else surrounding this LIV Series most certainly is — starting with their “eject-the-guys-who-ask-the-tough-questions” actions in their press conference earlier this week.

Associated Press journalist was at the LIV media center and of course, he was asking the tough questions. Now keep in mind the one thing that is totally Verboten (Nazi regime talk for “forbidden”) in Saudi Arabia is the good old American concept of Free Speech.

So things didn’t go smoothing when Harris put the interrogation lamps on Graeme McDowell,  reminding him of the 81 March executions back in the Saudi homeland, the Jamal Khashoggi assassination and assorted other human rights atrocities.  G-Mac turned very pale, even for an Irishman and finally sighed and said:  “I just don’t know what to say….”

Kevin Na didn’t like what was going on in the media center either.  When things got testy, he simply turned to leave and muttered:  “This is really uncomfortable.”

Yes, G-Mac tried to stammer out something about golf being a force for good but had no response as to how the Saudi sovereign wealth will help those who have been killed, maimed and oppressed by The Regime.

When things actually did start on Thursday, the commentary was nothing short of laughable.

When you talk about sell-outs, all you had to do was listen to these gems from Jerry Foltz, who used to do a nice job on the Golf Channel.

Foltz:  “As Greg says, this will grow the game of golf.”

Think good old Jerry’s been coached on what to say?

Foltz as he watched Kevin Na miss another putt:  “His optimism for the future of this is almost contagious!”

Really?  Good old Kevin signed for 73, three-over by day’s end.  Tough to know because, well, there was, you know, no scoreboard, not even one on the LIV website as play began.

Dustin Johnson hit a shot and the announcer screams:  “Oh look at this — it’s RIGHT AT IT,”  D.J.’s iron shot stops 35 feet short of the hole.

In the early going, Sergio Garcia missed a two-footer for par.  Now you know why he signed up for this guaranteed money.

They put together a “feature group” with D.J. and Mickelson who played together along with a scruffy youngster named Scott Vincent (ever heard of him?).  Well, D.J. and Phil managed to finish one-under (69) but that was tough to confirm without a scoreboard.  The scruffy kid cut ’em both by two shots (67).  Now you know why Phil and D.J. are there.

At the end of the day, it looked like Charl Schwartzel was the low guy with a five-under par 65.  The great Hennie Du Plessis was a shot back and two back with the aforementioned Scott Vincent was Phachara Khongwatmai.  You wonder how much guaranteed money Greg threw at Phachara to land him?

As far as the leading team after day one?  If you looked at the LIV site after play was finished — there was nothing.  Billions of dollars to spend and no leaderboard on the website?  Finally someone probably went “Doh” (perhaps Homer Simpson) and late Thursday evening, lo and behold, the leaderboard finally appeared on the site!  Our condolences to Andy Ogletree and his 82.  Now we know why Andy’s there.

We were hoping Alan Shipnuck might clue everyone in.  The esteemed, decorated writer went over on his own time, bought a ticket after being denied press credentials.  He went into the Mickelson post round press conference but was physically removed.  He described the incident on his Twitter feed:

“Well, a couple of neckless security dudes just physically removed me from Phil Mickelson’s press conference, saying they were acting on orders from their boss, whom they refused to name. (Greg Norman? MBS? Al Capone?) Never a dull moment up in here.”

Poulter and Westwood must have conferred and come up with their own plan:  they refused to answer questions.  Easy to understand why they jumped.  Westy and Poults both shot 75s and would be leaving town early after Friday.  But no cut on this parade of the aged and mediocre.

So yes, why allow freedom to ask the tough questions in the media center?  After all, the backers of this deal, the ones throwing all the cash at these golfers, well, they’re not exactly big on free speech or criticism of The Regime.

As for Alan Shipnuck, we wish him well, hope you’re back for a real competition next week at the U.S. Open.