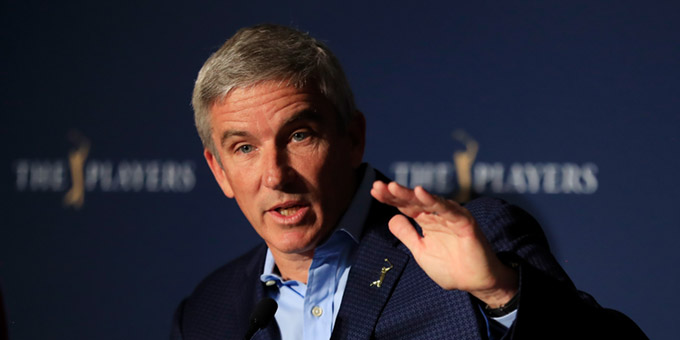 For the first time in Tour history, Jay Monahan went public with suspensions.

It came as expected, it was swift and to the point — PGA Tour Commissioner Jay Monahan announced on Thursday that players who defected from the PGA Tour and teed off this morning in the first LIV Series event outside London — have all been suspended.

And it sure sounds like that suspension has no end date.

The memo to all players was issued as the LIV players were finishing their first hole of the day.

“In accordance with the PGA TOUR’s Tournament Regulations, the players competing this week without releases are suspended or otherwise no longer eligible to participate in PGA TOUR tournament play, including the Presidents Cup. This also applies to all tours sanctioned by the PGA TOUR: the Korn Ferry Tour, PGA TOUR Champions, PGA TOUR Canada and PGA TOUR Latinoamérica.

Also in accordance with PGA TOUR Tournament Regulations, the players who have resigned their membership will be removed from the FedExCup Points List when the official statistics following the RBC Canadian Open are posted on Sunday evening. These players will not be permitted to play in PGA TOUR tournaments as a non-member via a sponsor exemption or any other eligibility category. The memo included an additional commitment that the TOUR’s current membership will not be negatively impacted – in the way of Priority Rankings, tournament eligibility or eligibility to compete in the FedExCup Playoffs – by those suspended members who have yet to resign.

“These players have made their choice for their own financial-based reasons, but they can’t demand the same PGA TOUR membership benefits, considerations, opportunities and platform as you. That expectation disrespects you, our fans and our partners.”

The common theme for those who left the Tour is that it was for the massive amounts of money offered by the LIV Series.

Rory McIlroy, who has steadily become the voice of PGA Tour players, gave his take on Wednesday, prior to the announcement of the suspensions:

“Any decision that you make in your life that’s purely for money usually doesn’t end up going the right way. Obviously, money is a deciding factor in a lot of things in this world, but if it’s purely for money, it never seems to go the way you want it to.”

McIlroy added:  “It’s a weird time in professional golf, and we’re just going to have to see how this season plays out and if any other guys decide to go another direction than the established tours and see what the consequences are,” he said. “I can only speak personally, but it’s not something that I envision ever doing. I’m happy playing the PGA Tour, and I have a nice schedule that I can pick for myself. I can spend a lot of time at home with my family if I want to, prioritize the majors, and there’s nothing about my schedule or my life or my earnings or anything that I would change.”

Rory McIlroy waited three years to defend his Canadian Open title and he got to work at St. George’s Thursday with a four-under par 66 that left him three shots behind first round leader Wndham Clark, whose seven-birdie effort was good for 63.

Matt Fitzpatrick was a shot back of Clark with a 64 while Doug Ghim’s 65 put him by himself at five-under par.

The rough was a factor as the course setup gave players a chance to prepare for the type of conditions they’ll face next week at the U.S. Open, fairways were a must.  Scottie Scheffler missed too many and his bogey-bogey finish thanks to errant tee shots left him at one-under (69) for his first round.

Justin Thomas joined Scheffler at one-under while the other top 10 guy — Cam Smith, had a brutal first day and finished with 76 and in danger of missing the weekend.