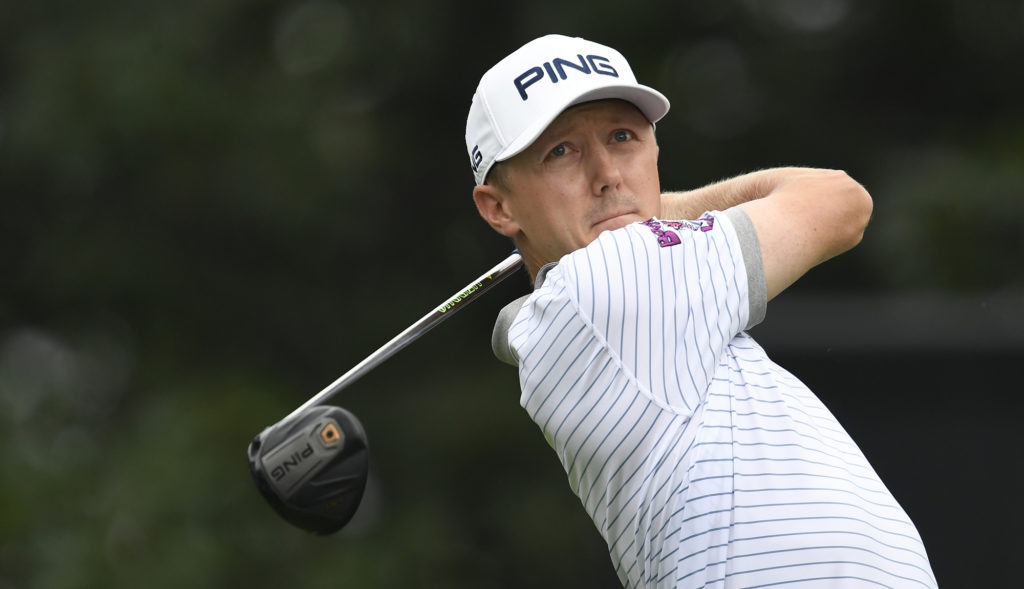 Mackenzie Hughes shot a career low 60 Thursday at The Travelers.

Mackenzie Hughes finished a shot out of dead-last-place last Sunday at the RBC Heritage.  That will happen when you shoot 78 on Sunday, which is what Hughes put on his scorecard at Harbour Town.

Fast forward to Thursday’s first round at The Travelers and a different Mackenzie Hughes showed up at TPC River Highlands.  This version of Hughes not only tore it up, the 59 watch was on in the morning when Hughes played.  The 29-year-old Canadian started on the back nine and finished that side with five straight birdies and a 29 going out.

Hughes got to seven-under for the day when he birdied the second hole but then put three straight pars on his card.  With four holes left to play — he’d have to birdie all of them to shoot 59.  He brought 59 back into play with birdies at six, seven and eight and needed one more at the ninth.  But his approach left him 40 feet short of the cup and his putt for 59 came up well short.

“I would have like to have had it within 15 feet,” said Hughes after shooting the lowest round of his PGA Tour career.  “Just pretty fun,” is how he described his special morning.  “I started to think about it when I was seven-under through 11.  I did the math and needed to birdie four of the last seven.  It felt pretty doable if I just birdie in.”

McIlroy Leads Group Of Three At 63:

The world’s No. 1 got off to another fast start.  Rory McIlroy put six birdies, an eagle and a single bogey on his card en route to a morning 63.

In the afternoon, he got some company.  Both Xander Schauffele and Viktor Hovland tied McIlroy’s morning number.  Both Schauffele and Hovland squandered chances to shoot 62.

Schauffele was eight under with two holes to play but left his approach to the 17th about 63 feet short of the hole.  He proceeded to three-putt and then a missed birdie putt from inside 12-feeet at the 18th left him with 63.

Hovland was seven-under when he hit a poor approach to 17  that finished right and well short of the green.  He failed to get up-and-down, made bogey but bounced back when he stuck his approach to 18 inside three-feet and finished with birdie for his 63.

Collins Morikawa has made 22 straight cuts to start his PGA Tour career.  He’s chasing the number 25 set by Tiger Woods when he began his tour career.  Morikawa’s going to have to work hard to make it 23.

He was off all day and finished his first round with a two-over 72 and he birdied his last hole, the 18th, to shoot that.  The 36-hole cut could be four, perhaps five-under par on Friday, which means Morikawa will have to go low to make it 23 straight.

Jordan Spieth was looking good on Thursday — for nine holes anyway.  Jordy started his first round like gangbusters, shooting a four-under par 31 over the front nine at TPC River Highlands.  But as soon as he made the turn, things started going in the wrong direction.  He missed a par putt at the 10th from inside five feet and managed only one birdie coming home, finishing the back nine one-over for an opening round of 67.

Earlier in the week, Hall of Fame instructor Hank Haney made a pretty blunt statement about Spieth’s game.

Mickelson Shoots 64 In First Round As A 50-year-old:

Phil Mickelson is now eligible for the Champions Tour.  Don’t look for Lefty out there with the old geezers any time soon.

Playing his first round as a 50-year-old, Phil went bogey-free on Thursday.  Let’s repeat that — Phil was bogey free on day one at The Travelers.  Lefty put a half-dozen birdies on his card and finished with a six-under par 64 — tied for fifth with five others players including Sergio Garcia.

Bryson DeChambeau continued his quest for more distance off the tee at River Highlands and was able to hit more drivers at TPC River Highlands than last week at Harbour Town.  DeChambeau had five birdies, no bogeys on his way to a 65 and a tie for 11th.

Birdie Barrage On Day One:

How was TPC River Highlands playing on Thursday?